"Pet Sematary" stays loyal to the source material, all while offering new and fresh ideas. Well written, directed and acted, this film will satisfy every horror fan.

Making a movie of Stephen King’s book is easy. Making a good movie that will not only stand to Stephen King’s source material, but also excel on its own, is not a task for just anyone. And I am very happy to say that “Pet Sematary” belongs to the latter.

Creed family has relocated to quiet, small town of Ludlow, Maine. They have grown tired of busy life in Boston and also new job at local college clinic promises that Louis can spend more time with his family. And while he is at work, his wife Rachel will look after their children – eight-year-old Ellie and two-year-old Gage. Family immediately falls in love with lush forests of Maine. But, they soon find out that their huge house lot also includes a pet cemetery (actually, spelled as Pet Sematary). Neighbor of Creed’s, old timer Jud explains that it has been a local tradition of Ludlow children to bury their beloved animals in that area. And soon Ellie’s cat, Church is killed by a car. Jud takes Louis to Pet Sematary to bury his cat. But noting that Louis doesn’t want to make her daughter sad, Jud instead asks Louis to follow him deeper into the woods. Because there the ground is sour…

I would really like to commend the screenwriter Jeff Buhler for doing an awesome job adapting the source material, which Stephen King has admitted is his most scariest book. Story tries to stay as close to the book as possible, while offering new elements and different ending. I expected this, as I knew that there were a lot of things in the book that were either not-filmable or would make little sense to concentrate on. Buhler masterfully evades these scenes, giving the film something new. And this new is what makes this film stand out, all while maintaining same nail-biting creepiness and overall darkness.

My only critique is that I wished they have included or elaborated on the character motivations. While it was all brilliantly described in the book, I predict some viewers would find some things annoyingly unexplained. Things like why exactly Jud did tell Louis about the burial grounds. Or why exactly Louis then did what he had to do. A little elaboration on the actions and motivations I think would have made “Pet Sematary” much more grounded.

“Pet Sematary” is genuinely pure horror. And we have to thank directors Kevin Kölsch and Dennis Widmyer for that. They masterfully build tension by using long shots, slow tracking cameras and extremely scary imagery. There are, of course, mandatory jump scares, but they are well spaced and used only in first section of the film. I really enjoyed the way directors handled the tension aspect of the film. While it is nowhere close to “Hereditary“, it still manages to deliver thrills by not only building it, but also delivering explosive action.

Another thing that I also noticed how directors managed to keep the dark tone. There are no cheesy dialogues, no campy weirdness or funny violence. It is not “Us” in any sense. “Pet Sematary” starts dark and it gets darker and darker with each minute. 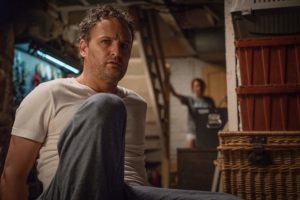 Interestingly, the best acting of last year came from horror films. Who knew that by making characters believable horror films can be taken to other level? But exactly this was proven by Toni Collette in “Hereditary“, Tilda Swinton in “Suspiria“, Emily Blunt in “A Quiet Place” and even last week’s Lupita Nyong’o in “Us“. And now “Pet Sematary” joins this list of horror films with exceptional cast. On one hand we have Jason Clarke play Louis. He surprised me a lot with his last year performance in “Chappaquiddick” and “First Man” and he continues to do so again. I am expecting big things from him. On the other hand we have veteran actor John Lithgow as neighbor Jud. While the genre is a little new for him, he brings all his craft to the table.

Supporting cast is awesome addition of young and brave Jeté Laurence and grieving Amy Seimetz. Both play their parts perfectly, especially young Laurence, without whom this film would have been a disaster.

“Pet Sematary” is a masterfully made “pure horror” film. It stays loyal to the source material, all while offering new and fresh ideas. Well written, directed and acted, this film will satisfy any horror fan and more.