Peele masterfully creates and sustains tension, supported by amazing cinematography, editing and acting, but effect is loss due to storyline diverging into weird clichés and comedy elements that ruin intensity with a slapstick.

“Us” became one of the most anticipated films of 2019 as soon as it was announced. Indeed, the surprise success and popularity of “Get Out” guaranteed that Jordan Peele will do another film. And this time, he promised it will be “pure” horror.

You are Adelaide, you have a loving man-child husband, rebellious teenage daughter, and curious young son. You are going to vacation in your grandmother’s old cottage next to the beach. Except you are not excited about it. Especially about the beach. Because some thirty years ago, you briefly wondered off from you parents in the beach and ended up going into carnival mirror house where you “met” a girl in there. Experience shakes you up to the core, which you hide inside you for all this years. But when suddenly four people clad in red show up in front of your doors, all memories come back. Oh, yes, and this people are messed up version of you and your family. 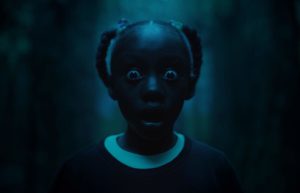 Young Adelaide sees something she will want to forget

For a weird step out from my review formula, I have decided to write about directing first. “Us” proves that success that Jordan Peele had as a director of “Get Out” is not a mere surprise. He employs an arsenal of an established horror director, all while keeping the film entertained and somewhat away from regular horror clichés. He uses minimal jump scares, blood and violence. Instead he ramps up psychological intensity to create and nourish terror in us.

I really enjoyed the camera work and lighting. Peele masterfully uses the fact that dark skin reacts differently to lighting than light skin. This opens up a whole new avenue to create masterfully staged and lit scenes that elevate the experience further. So instead of usual yellow/orange palette that most horror films utilize, “Us” heavily uses blue/purple lights to create stunning response.

Peele also uses backlighting to further affect the images. Red family is constantly in shadow. Their appearance doesn’t contrast the background, but gradually melts into it. Thus the only thing that stands out is whites of eyes and teeth. This had a tremendous effect on me in a way I didn’t actually expect.

At 116 minutes, film is unusually long for a horror film (though still shorter than “Suspiria”). But time is not of a concern, as Peele manages pacing beautifully with masterful editing. Editing is subtle and spot on. There are very minimal jump scares, and even they don’t feel like Peele is pushing them on us. 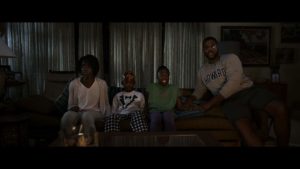 Wilsons are not ready at all

The problem I had with “Us” is the writing. And not really the plot progression, but the explanation and ending. Film starts with a promising setup. There is whole “is she or is she not mad” moment which then diverges into something completely different (not spoiling it). It is all nice and cool and somewhat believable until we get to the middle when film has to explain us what is happening.

And then film turns into another episode of “Black Mirror”. Except not a good episode, but weird, illogical and borderline boring “Black Mirror” episode. To the extent that I pretty much lost all suspense of disbelief in the end. I had so many questions starting with why, how and what for, that it almost killed the whole experience and satisfaction I was having from the film. And I am not even talking that storyline went from being fresh, to complete derivative of sci-fi clichés.

Another thing that was a killer for me was comic undertone. While it worked perfectly in “Get Out”, Jordan Peele has a lot of problems with it in “Us”. He tries to keep it all serious and “pure” horror, but he just can’t not diverge from making film funny. As such, some horror scenes become slapstick. I really wish Peele didn’t go there as it just downgrades the whole experience and destroys all built up tension of horror.

What is secret of Red?

Pretty much every actor played two roles as themselves and their “red” version. Lupita Nyong’o just kills it with her performance. She is extremely believable as troubled Adelaide and her psychotic counterpart. Winston Duke was a revelation in “Black Panther”, but in “Us” I didn’t like him much. He plays stereotypical American dad, who is still a child inside. I am not sure if he was written like that, but I think Duke failed to deliver a believable performance.

I enjoyed Shahadi Wright Joseph as a teenage daughter of Adelaide. She was very intense and spot on in her scenes. Evan Alex plays Adelaide’s younger son. He delivers the job, but unfortunately couldn’t convince me to be invested into his character as it was intended.

Elisabeth Moss and Tim Heidecker play supporting parts and I just hated them. They were extremely poorly written to begin with, but their performance was weird and ridiculous. Especially to see Moss, who is a very talented actress, to perform this way felt as a huge waste of talent.

In all, “Us” is a very well made film with mediocre screenplay. Peele masterfully creates and sustains tension for the whole film, supported by amazing cinematography, editing and acting, but effect is loss due to storyline diverging into weird clichés and comedy elements that ruin intensity with a slapstick.