“Hereditary” is a type of horror film that you see very rarely in recent times. First of all, it has an amazing cast. Second, it doesn’t resolve to cheap jump shots to scare people. And third, it is 127 minutes long. You would think that all three would actually elevate the film to the next level. But, unfortunately film just sags under the things that make it stand out.

Ellen Graham has died. In her bed, from old age and dementia. Her last several years she spent with her daughter Annie and her family, though they never were really close to each other prior to that. In eulogy to her mother Annie mentions that Ellen was a very private person with her private friends. Death of Ellen affects all family members differently. While Annie is lethargic on surface, her son Peter couldn’t care less about death of her Grandma. In contrast, Annie’s young daughter Charlie, who has always been weirdly close to Ellen, is visibly distressed. Annie’s caring husband Steve just tries to keep everyone sane and peaceful. That same night though Ellen’s grave is vandalized and body is stolen. And immediately strange occurrences start happening in the house. But is it for real or is Annie getting mad? 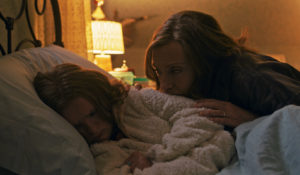 “Hereditary” is written and directed by newcomer Ari Aster. His screenplay is full with long silences and expository dialogues. In fact, there is so much exposition packed into one specific scene, that despite incredible acting by Toni Collette, the words she was saying felt so uncharacteristic, so fake, so out of place. They were there just to let viewers know the backstory and not the emotional state of the character, as director originally intended.

Story itself is revolving around supernatural and occult. It is nothing new, in fact it seems as another rehash or remix of films you have seen before. And like in most cases, instead of taking only the good parts, “Hereditary” also borrows a lot of mediocrity from other films. In that sense, even “Veronica” had a much better story. Resolution of film felt inconsistent and to be honest quite unsatisfying by all means. The explanation and revelations are mundane at best and never give anything worthy. 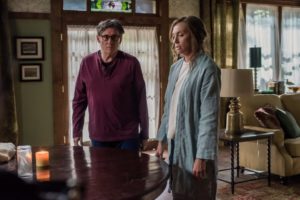 Unlike other genres of horror, supernatural horror films don’t necessarily invoke horror. The main drive is slow tension that builds up the dread. It is the uneasy feeling that audience gets waiting to find out what slow pan of the camera will show behind the corner or where is the weird clicking noise coming from or who is hiding in the shadow. These sequences are usually supported by unnerving soundtrack of somebody playing violin with a chainsaw. In cheap films they usually end with a random jump scare. Good films tend to not resolve to that. “Sixth Sense” had dread involving dead people trying to hurt the boy. In “Rosemary’s Baby” we had a pregnant mother wanting to protect her unborn child. “Veronica” shows that danger to main hero meant danger to all her family.

“Hereditary” tries it’s best to stay away from jump scares. But I can’t say if there was a truly scary moment in the film. Film instead concentrates in building a very serious feeling of dread. And partially succeeds in that – first half of the film builds up a truly unnerving and sometimes goosebumps inducing tension. Unfortunately, this tension doesn’t resolve into anything proper or substantial and the second part of film felt like a complete let down. I thought for a moment that it was just me, but audience in the cinema unanimously agreed by laughing at scariest moments instead of screaming in terror. This especially showed itself in the ending, which seemed ridiculous and unsatisfying. 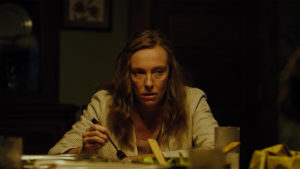 Toni Collette as Annie is phenominal!

Where “Hereditary” truly excels is acting. Pretty much all main cast shows exceptional acting skills. Something you tend not to see in a horror film. Toni Collette delivers one of the most genuine and amazing performances of not only her career, but possibly by actress in a horror film since Kathy Bates in “Misery”. I will be very disappointed if she will not earn an Oscar nomination for her role. Her delivery is not something of “Oh my God believe me!” kind, but is an emotional, touching and shaken performance. Gabriel Byrne returns to horror films, genre that suits him the best. He, of course, matured since last time he was in a horror film and his performance has matured with him. Also, would like to mention Alex Wolff as Peter, whom you might remember as a nerd from “Jumanji: Welcome to the Jungle“. Unlike that film, where he plays a goof, here he gets a chance to show his dramatic abilities of acting spectrum and uses this opportunity surprisingly well.

Despite being well-made and out-of-worldly performance by Toni Collette, “Hereditary” struggles with mundane plot and unsatisfying ending. Inability to provide enough scare, albeit craftily building tension and dread, seriously maims the enjoyment of the film. That paired with 127 minutes long runtime just ruins everything.