In an era when anything with a jump scare and a surprise twist is called horror film, “A Quiet Place” stands out by a mile. Because, unlike others, it concentrates on human emotions, values, love, and survival despite any horror. Maybe we need it now, when we live under impending doom of “Black Mirror”, “Get Out” and “Purges”. Regardless of social commentary some might argue here, I am sure people will remember this film years to come. That is because this film is THAT good.

We don’t know why or when creatures came. They are just here. All we need to know is that they are a) blind, b) hunt by sound, and c) have no apparent weakness. Under these conditions, all you can do to survive is to be ABSOLUTELY quiet. You communicate with sign language, apply chalk/ash to the walking grounds so that no noise is made when you walk, always be barefoot, step only on marked areas (no hardwood cracking!), use corn leaves as plates to absorb sound, eat with your hands and under NO circumstances put batteries in a toy. Lee Abbott’s family lives just like this in farm. With his wife, Evelyn, they raise their children, teenage deaf girl Regan and ten-year-old boy Marcus. They are expecting addition to their family – Evelyn is due soon. But how can you be quiet, when all you want to do is SCREAM? 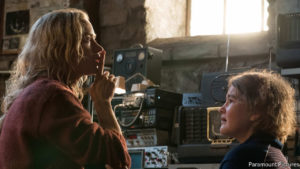 Film is written by John Krasinski, Bryan Woods and Scott Beck, based on Woods’ and Beck’s story. First of all, let me tell you the script of “A Quiet Place” should be thought in film school. This is one of very unique films that successfully avoids so many cliches. Let me tell how it would have looked if done by your regular screenwriter. First, you start with a text on the screen. Very small font. Then the voiceover of some veteran actor, Anthony Hopkins maybe, will read you what you can read yourself. “They appeared out of blue on day bla bla bla.”

Then there would be existential Day 0 montage, people waking up early in the morning, going to work, drinking coffee. Then, of course, there are news reports of “unspecified weird activity” and “military has taken over the city to contain damage”, which literally no one cares to notice. Creature breaks into the house. Girl is taking shower. She doesn’t know there is a creature lurking and it grabs her. She screams and we cut to the title screen. Which slowly rolls out under funky old rock-n-roll ballad, that has nothing to do with the weird stuff film is about. Matter of contrast. If that sounds familiar, welcome to the club. Scene I described is literally how Zach Snyder’s “Dawn of the Dead” begins. Which, don’t get me wrong, I think is one of the finest horror films of recent. All I am saying it is full of cliches.

“A Quiet Place” is not. Who cares where the creatures came from or what they want or why? All we need to know they are here and they hunt by sound. Film is not about them, it is about being a parent and about taking care of your family under this circumstances. About teenage girl who thinks her parents hate her. Of young boy who is afraid of growing up and accepting responsibility. Mother who knows all the pain she will have to endure to give birth to a child in a world, where baby can not make a single sound. And about father who secretly lives in terror knowing that one single mistake and everyone will be dead.

We don’t even know their names! Since 95% of time characters communicate through sign language, they don’t call each other out. I found out they actually had names from Wiki. There is no expositional BS, like “oh, it is your last day at job today bla bla” or “I wish I was getting married to your sexy marine scientist fiancee”. All information we get is from the screen. Makes you think and wonder. And to that I announce “A Quiet Place” deserving an Oscar nomination next year. 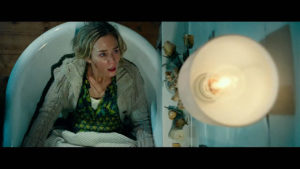 Speaking of Shyamalan, Krasinski’s directorial work reminded me of him a lot. He deliberately avoids jump scares (at least, as long as film can afford that) and masterfully builds suspense. There is literally one scene (no spoilers, I will try) that made me grab the armrest and my heart almost sunk. It is the scene where Evelyn wakes up. There are no jumps scares in it. She just looks around and we look around and then Evelyn and the audience, AT THE SAME TIME notice “something”. It is done so masterfully that half of the audience went “Holy F$%$!” In execution, I can compare it to same feeling I got from Stanley Kubrick’s “The Shining” photo moment, Hitchcock’s “Birds” walk to the car scene, Steven Spielberg’s “Jurassic Park” T-Rex appearance, Shyamalan’s “The Sixth Sense” ring drop, Ridley Scott’s “Alien” ending with sleeping xenomorph, James Cameron’s “The Terminator” locating Sarah Connor in club. This is how big it is.

What I also enjoyed was despite the fact that Krasinski is coming from indie background, he keeps “indie” to the minimum. There are no weird angles, long shots, extreme close-ups or superwide establishing shots, no shaky footage, no film grain, shadow plays or anything else you expect from an indie horror film. He plays it safe, thus avoiding building artificial tension through cinematography, instead concentrating on the story and edits to do their job. His twists appear to be twists to the characters, not the audience. It’s Chekov’s Gun principle all over. “If in the first act you have hung a pistol on the wall, then in the following one it should be fired.” Film foreshadows the whole plot. Film builds tension by letting us know EXACTLY what is going to happen and we just sit and watch and anticipate when that will happen. Nail scene, for example.

I also enjoyed how the design and execution of creatures. Just like in the “Alien”, we don’t get to see the full creature until almost the end. For the most part, creatures are just silent killers in the night. We don’t see them, we mostly just hear them or catch a glimpse of teeth and claws. Again it all comes to the point of why exactly do we need to see them if the film is not about them? At the same time, film avoids ridiculousness of “Cloverfield”, a film which is about a monster, but without a full shot of said creature. “A Quiet Place” balances it’s monsters. They are shown when they are needed to be shown, not a second early, not a second later. 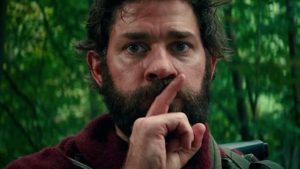 Father (Krasinski) wants us to stay quiet, no matter what!

“A Quiet Place” literally is a silent film with subtitles. This by itself is an enormous undertaking for a director, since he needs to always show who is talking. On the other hand it is tremendous strain on the actors who need to play with their facial expressions, not mouth. They have to be believable and convey exact reactions. John Krasinski plays father and his real life wife, Emily Blunt, plays mother. Their screen chemistry is natural (no surprise here), at the same time they both are able to deliver heartfelt, pure emotions. Emily Blunt is obviously a much greater actor, and Krasinski understands that, both as an actor and director. For the biggest emotional scenes, he gets behind camera and let’s her wife deliver amazing performances all on her own.

Millicent Simmonds, a deaf actress, plays teenage girl who is going through abandonment issues, gives another edge to the character. Unlike others, she doesn’t need to pretend to be silent. She IS silent. Noah Jupe plays her younger brother who doesn’t want to grow up and face real world. He wants to forget all that happened and stay child for as long as possible. He is also very believable and relatable character.

Innovative, masterfully crafted, heartfelt, engaging, and at the same time, disturbing, bone-chilling, frightening, and suspenseful, “A Quiet Place” shows that horror film doesn’t need nauseating inducing violence, cheap jump scares and cliche elements to be successful. John Krasinski, despite admitting not be grown up on horror films, delivers an instant horror classic. Supported with strong performances of the cast this film deserves recognition. And that ending. That is the most satisfying (I am not saying good or bad) ending I have seen since “Inception”.