Despite a long runtime, "Suspiria" never bores with masterfully built tension and truly fantastic work by Tilda Swinton, but has an ending that makes little sense and is cartoonish.

It is quite evident that psychological horror films are making return. This year we have films like “A Quiet Place“, “Annihilation” and “Hereditary” that rely more on tension, dread and suspense rather than cheap jump scares and gory visuals. “Suspiria”, remake of 1977 film by the same name, is another addition to this mighty list.

Seemingly delusional Patricia makes her way to office of psychologist Dr. Kemperer in West Berlin, 1977. She is dancer in Markos Dance Academy, but she claims that world famous company is actually a witch coven. In the meantime, amateur dancer Susie arrives to academy. She convinces academy teachers to allow her an audition and completely blows their minds away with her raw technique. She specifically attracts attention of lead choreographer, Madam Blanc, who senses mysterious force while Susie dances. Susie is immediately admitted to academy, to actually replace Patricia, who has just disappeared. But while Susie celebrates her immediate success with her new friends, all teachers of the academy discuss in private whether they have finally found that ONE girl they have been looking for all these years. 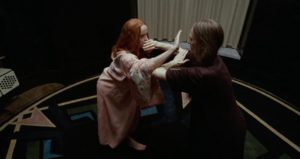 For the most part “Suspiria” is a very well written film. It has multiple characters that story centers on and screenwriters give each of them a proper time to develop and evolve. There are several narratives mostly concentrating on the events happening in the academy and a side story of Dr. Kemperer, who tries to find Patricia and reminiscences his past. However, there are minor things that have been added to the plot that didn’t honestly make much sense. I am talking about some random events that are happening in parallel to the main plot, like the whole story about terrorists or not so subtle feminist attributes, for example.

Despite having very long time (152 minutes), film never bores you. This is because the setup and story are really interesting and intriguing. Weird events that happen on screen very successfully induce suspense and dread through the first couple of hours. This I can not say at all about the resolution and ending of the film. Film wastes all suspense on a random solution that is neither satisfying nor interesting. As such, ending seems very out of place. Even cartoonish at some point. It overall managed to degrade my whole experience of watching “Suspiria” tremendously. 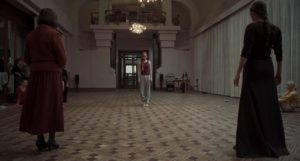 I was very adamant actually watching this film. Firstly, because of the 152 minutes of runtime. This is incredible amount of time for any film, let alone a horror film. I can’t honestly remember any horror film being this long. Secondly, director is Luca Guadagnino, best known for romantic drama films. I was really unsure how would he be able to handle psychological horror film. But what I found that my second concern actually solved my first one. Luca Guadagnino takes the film on another level, not letting you anyhow zone out of the film during its very long runtime. He masterfully builds, sustains and evolves tension throughout the whole film. Not a single time I was concerned about time while watching “Suspiria”.

Guadagnino uses several visual techniques through “Susperia” to further increase uneasiness. Some, like extremely quick cuts akin action movies, I did enjoy, though found kind of weird. He builds up West Berlin atmosphere masterfully, using washed out tones and colors. I didn’t see any bright or main colors throughout the whole duration of film. It’s a very known technique and horror directors usually use it with conjunction of very bright red color for blood to attenuate the visual horror. However, this is not the case with “Suspiria”. Color is toned down (very toned down) through the whole film without any cheap tricks with regard to visual clues. 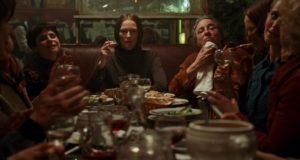 “Suspiria” has an impressive cast of young actresses like Dakota Johnson, Mia Goth and Chloë Grace Moretz, but the one and only star in this film is undeniably Tilda Swinton. She is amazing actress in general, but “Suspiria” is just beyond any other work she has done. Her level of acting pushes envelope in all sense. Just like her character, who owes the dancefloor and dancers, she owes every scene she is in. She emanates force through the screen and this adds a very chilling effect to her already mystical character of Madam Blanc. This is by far the best performance by an actress I have seen in whole year.

Despite a long runtime, “Suspiria” never bores with masterfully built tension and truly fantastic work by Tilda Swinton, but has an ending that makes little sense and is cartoonish.