With one of the best rocket launch sequences ever to be filmed and invigorating soundtrack, “First Man” disappoints with overdramatization of events, long runtime and Chazelle’s extremely annoying decision with framing and camera shake.

Flying to Moon is undoubtedly one of the biggest accomplishments of humanity. An object so iconic and so visible has been an unreachable dream for centuries, if not eons. So, the pressure on the first person to step on the Moon has been humongous. This person should have been a pinnacle of humanity, a brave hero who is not afraid of what may come and who is ready to sacrifice himself for history. After all, he is the “First Man”.

But story of Neil Armstrong becoming the person uttering iconic phrase while touching the surface of the Moon has been everything but easy. We find him in the cockpit of the X-15 rocket plane exiting atmosphere. But while returning to Earth his plane fails to enter. Armstrong makes a risky decision and manages to enter atmosphere with great danger to himself and plane. His bosses are not happy and he is grounded based on his dangerous behavior. But there is a reason for that. Armstrong’s 3-year-old daughter has a tumor. She passes away soon, leaving Neil totally broken and in despair. But being a person he is, instead of facing his emotions he decides just to turn the page. Right at this moment he notices that NASA is recruiting astronauts for Project Gemini, program that intends to put Americans to space. Neil doesn’t think twice before he signs up for it. After all what a better way is there to distract oneself than to sign up for potentially deadly task? 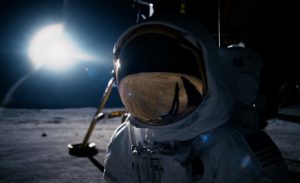 First Man on the Moon

Neil Armstrong has been a secretive, quiet person who didn’t like the spotlight that being the first man on Moon brought him. There was a reason he was selected as a first person to step on the Moon ahead of his much accomplished, decorated and esteemed fellow astronauts. It was that Neil Armstrong was humble, selfless, emotionless person. He earned respect for his ability to act cold-bloodedly under immense pressure. It was all these that made him make timely decisions in extremely dangerous conditions that lead to success of his missions.

Thus, filmmakers had to base a lot on deductions, interpretations and assumptions about his life. And while most of the stuff seem to fit right, there were some choices that didn’t. One of these choices is the emotional drive that Neil had. Without much spoiler, it is assumed that Armstrong’s biggest drive in his life was emotional attachment to his daughter Karen and her untimely death. That might not be a big stretch, but the way film exploits this idea paints Neil as a broken man who is constantly driven by his inability to save his daughter.

This could have worked with an imagined character, but in case of “First Man” it seems like filmmakers just wanted to instill empathy and tragedy, thus overdramatizing the real events. Chazelle again plays on viewer’s emotional state and tries to make Neil a relatable hero.

And while film concentrates on inner state of Neil, it completely misses opportunity to explore anyone but him. Supporting characters are very one-dimensional and raw. Even Janet (Neil’s wife) is not given much to do than just react to actions of Neil. What is surprising is that film is about her, just like it is about Neil. Instead, she is just an obedient wife who sits at home, smoking cigarettes and waiting for Neil to return. Sure.

Damien Chazelle’s choice of cinematography and editing almost drove me nuts. I viewed this film in IMAX and it was one of the worst decisions I have made. Camera framing is impossible to bear, especially on a huge IMAX screen. Chazelle uses very extreme close-ups of main and supporting cast. There is literally very few establishing shots. Framing either consists of telescopic lenses or macro lenses.

And then there is constant camera shake and jitter. I understand, you have an emotionless character and you want to give some life into otherwise stale scenes, but why do we need camera shake through whole film is beyond my understanding.

Now, I have to admit this works amazing during rocket launch sequences, because it gives us point-of-view effect, concentrating on the feelings and emotions of Neil during takeoff instead of some glorious sequence of CGI rocket emitting CGI flames, taking off from CGI launchpad into CGI sky. That was all fine with me. This is exactly how it feels to take off with a bomb behind your back, but why use the technique to achieve same effect in the rest of film? Do we need to see insides of Neil’s nostrils or see pimples on his wife’s face?

Editing also suffers greatly because of Chazelle’s decision to use shakes and framing. In some shots it is almost impossible to establish what is happening, especially in flight sequences, where everything turns into one big blur akin Transformers and you just don’t comprehend what is happening.

But there is one thing amazing about this film and that is soundtrack by Justin Hurwitz and Chazelle’s decision to use certain music in certain places. Soundtrack plays an extremely important role in understanding this film and elevates otherwise mundane scenes into another level. Soundtrack peaks during Moon flight and turns this section of “First Man” into an operatic masterpiece.

Unfortunately, it is only at the end of the film, and you will have to sit almost 2 hours of it before you see this epic ending.

Ryan Gosling is not a stranger to quiet, emotionless roles. He is amazing in “Drive” where he portrays silent and enigmatic heist driver. It works in “Drive” because “Drive” is an arthouse film. His character can stare 5 seconds at his opponent before he answers, because we accept that just how it is. That is not real life. We accept it just like we accept that everybody is an assassin in John Wick. In “First Man” it feels fake, reused and not interesting.

Claire Foy plays Neil’s wife, Janet, but screenplay doesn’t give her anything much to do. So, she just concentrates on smoking cigarettes and waiting for Neil. Which is a shame because she was exceptional in “Unsane”. Same goes of greatly underutilized supporting cast including Jason Clarke, who shined in “Chappaquiddick”.

With one of the best rocket launch sequences ever to be filmed and invigorating soundtrack, “First Man” disappoints with overdramatization of events, long runtime and Chazelle’s extremely annoying decision with framing and camera shake.