Film is a rare political film that doesn't force propaganda, instead offering view of behind the scenes action on the tragic event and proves that "House of Cards" is a valid example of how things are done in politics.

Political drama films usually annoy me because they tend to carry some kind of social message, usually a propaganda. Most of the events are not even remotely true. They are either twisted by a political forces who created the film, or who the film is about, or by friends and family members of said political figure to make him look better. Sometimes even the source material is freakishly unreliable. And in worst case scenario, producers take “artistic freedom” and ruin everything to make it look better on screen. “Chappaquiddick” is an exemption to all these.

On night of July 18th, 1969, Apollo 11 was preparing to enter lunar orbit and Neil Armstrong was rehearsing his landing speech. Down in Chappaquiddick Island though, Senator Ted Kennedy was cruising in his Oldsmobile. His passenger was Mary Jo Kopechne, his late brother Robert’s political staffer. They just left the party which was organized by Kennedy. Party included friends and colleagues of Kennedy and also a group of young, single, female staffers. There was alcohol. But instead of driving to the ferry, that would have taken them back to mainland, Kennedy drove the car to the beach instead. It is there that Ted lost the control of the car, plunged from narrow bridge and landed into the water, upside down. Kennedy was able to swim out. Mary Jo wasn’t that lucky. Kennedy tried his best to help her. Then he left accident scene. And did not report the accident for next 10 hours.

Film basically takes all the facts that have been known and disclosed, either from written and oral statements of Kennedy and his allies and witness testimonies and draws a rationale between them. Because, if you look into the facts you will see that there was no rationale whatsoever to Kennedy’s actions. Film takes an artistic liberty in terms of that, but I quickly realized that most likely this was not an artistic liberty, it was just a common sense. Because how otherwise would you explain the fact that Kennedy went back to the party house (which was 15 minutes away from crash site) instead of knocking on 4 houses on his way to call for help? Why would he swim across the channel to his hotel? Why would he show up at breakfast with no indication of previous night? Who would he be calling in the middle of night multiple times? 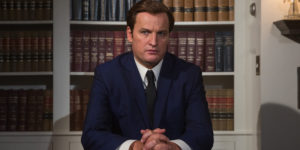 Kennedy (Clarke) about to make a statement

Film paints Kennedy as a melodramatic character, who is still plagued by deaths of his brothers, especially that of Robert a year before. Everyone wants for him to run for President next term, but he doesn’t feel ready about it. Film also suggests a physical connection between Ted and Mary Jo, without actually making a deliberate indication of their affair. Witness testimony vary, of course, as we learn from the film they might have easily been influenced by political forces behind Kennedy. This example shows how writers wanted to stay away from hard statements, but instead give a hint of what might have happened. After all, the only witness to most of the events is just Kennedy himself.

In that aspect, “Chappaquiddick” resembles another episode of “House of Cards.” But instead of cruel and ruthless Frank Underwood, we have a sympathetic character Ted Kennedy, who basically wants to do it right, but either lacks a dedication or is too afraid to lose everything. Whatever the case, this films shows to all haters of “House of Cards,” that the series is not too far apart from what exactly happens behind the scenes in Washington. Film wants us to know that Kennedy is just a regular guy, who just had a speed bump on his road and acted in panic. But that should have never justified his actions, way he handled himself right after the tragedy and through next week. 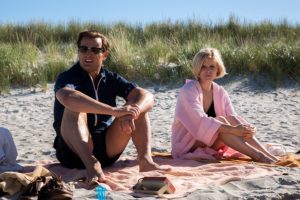 Like all political dramas, pacing of “Chappaquiddick” is super slow. There are long shots, cameras slowly zooming in and out of characters and long stares into nothingness. Overall it works quite well for the most part. Despite slow pace, film doesn’t bore you, because partially it plays out like a

detective story. Eventually things do get intense. And when they do director John Curran manages to transition with precision.

What I didn’t like was what the film presented. “Chappaquiddick” is a essentially story of Ted Kennedy. His thoughts, his feelings, his dilemma and his decisions. Slowly but steadily film forgets about Mary Jo. She is the real victim. It is supposed to be, at least, equally a film about her and how she died. But film doesn’t want us to remember her. And it’s a shame, because by giving her more emotional resolution director could have made Kennedy character even more controversial, in contrast. We never get that. All we get is Kennedy moving along to become the fourth-longest-serving member of Congress, until his death in 2009. 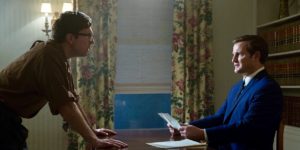 Screenplay calls for emotional, sympathetic, thoughtful and overall likable Ted Kennedy. Jason Clarke fits all of these requirements. In almost perfect performance, there is never a hint of over or underacting. He is perfectly in balance of the role. Kate Mara plays Mary Jo, but she has very little to do. After all she dies (read my comments in the directing section on her role) and fades out of the film. Ed Helms surprised with his completely serious role. Proves that he can really play a straight hero with no comical inclinations and still be extremely effective. Bruce Dern was amazing as ailing patriarch of Kennedy clan.

“Chappaquiddick” is a rare example of political movie that doesn’t force you a propaganda. Concentrating on Ted Kennedy character it offers a view of what might have actually happened and how political forces try to undermine the public knowledge and moral values. However slow pace and director’s decision to not give the real victim, Mary Jo Kopechne an emotional resolution, makes this film a little duller than it could have been.