Visual, vibrant, unnerving, and suspenseful landmark for sci-fi lovers, it might seem weird, boring, convoluted, and confusing for a regular viewer.

You will not like “Annihilation”. I just know that. You will say this movie is long, boring, unnecessarily complicated, repetitive, confusing, and is total trash in general. And you will be absolutely correct. You might even would like to request a refund for a ticket (just like a couple next to me in the movie theater did). You will also tell me that my movie taste is horrible. And I will be totally fine with it, because one way or another, it would not change the fact that “Annihilation” is one of the most stylish and innovative science fiction movie made in recent years.

with disoriented Lena (Natalie Portman) surrounded by medical team in hazmat suits in what seems to be a military contamination room. She doesn’t know how she got there. Or what she was doing before. She thinks she has been “gone” for weeks, but she is told it has been four months. She is not sure if her teammates are dead or alive. Apparently she is only the second person in three years that went into the “Shimmer” and was able to return. See, place they call “Shimmer” is a weird exclusion zone that surround the area where an extra-terrestrial object struck the Earth. And Lena will tell her story. Story of unhappy marriage and self-destruction. Weird memory lapses and hallucinations. Mutation and evolution. Psychosis and hysteria. And maybe annihilation.

that the film is based on, they say is even weirder. Not sure, I have not read it yet. Regardless of that, story seems to be convoluted for a specific reason. First thing we learn as soon as they get into the shimmer is that none of what Lena says might actually be true, because all of her team were missing recollection of first four days (according to their calculations) in the Shimmer. What happened during that time? Does it matter anyhow? Why sudden mass memory loss? Second, Lena is lone survivor of the group (it seems). How much can she be trusted? Since we don’t have any other source to confirm her words, do we need to believe her? Third (and this is important) is Lena even a positive hero? She certainly is more complicated than your usual hero. Why should that matter to us?

It’s not first time in movie history when the sanity, morality and trustworthiness of hero is under a question. There is even a word for that, called “unreliable narrator”. But is Lena unreliable? And even if you take it at a face value, this movie tries to steer away from that. What if Lena filters what she is saying? Maybe she just truly believes her words? What movie does is that it basically ignores our need to know that. And it is a big slap for you, see, you can’t not know what is happening. You can’t take things a face value, can you? 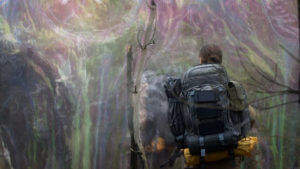 Lena (Portman) ready to get into Shimmer

this film is easily compared to works of Tarkovsky, the master of the genre. Imagine stylistically a blend of “Solaris” and “Stalker“. Difference of Alex Garland‘s directorial work though shows up in the subtleties. The long shots are not long. Pauses are not forceful. Exposition is only visual. All the questions and answers appear in a viewers mind. Garland basically forces you to think, analyze and comprehend. Design of the film is impeccable. Insides of Shimmer will remind you of a very vibrant and weird hallucinogenic trip. From outside Shimmer looks like an oil spill on the surface of a water, with rainbow reflections and constant movements. It is visible that there is something different going on inside the Shimmer. But this colors and mutations and transformations, are they for good or bad?

I didn’t like much about “Ex Machina” (for my own reasons) of Alex Garland. That film was more story with very little showcase of directorial work. “Annihilation” vice versa, shows the ingenuity and evolution. Whereas the first two acts are slow and passive, third act is very direct and nail-biting. Creepy, probably is the best word. I was surprisingly unnerved by it. And very big kudos to Garland to be able to deliver you there. That was no easy feat, to still be able to get you on the edge of your seat after what might have seem to be very long ride.

Soundtrack has to be noted separately. I am not sure how this movie can be viewed without the amazing music score. Especially how the music follows the action and elements on the screen is something that keeps the movie flowing and being coherent, and at times even adding more uneasiness. 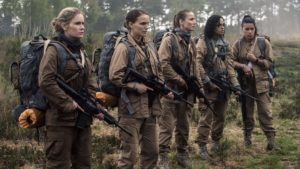 Expedition members are not sure what is ahead of them

is something out of this world in this film. Her unbelievably convincing portrayal of character is what keeps the movie intact, especially during slow first part of it. You can see this intricate details in a contrast of Lena’s behavior with her husband, where she is caring, emotional and optimistic, and without him, where she is cold, measuring and realistic.

I will also commend supporting cast members Jennifer Jason Leigh, Gina Rodriguez and Oscar Isaac. Leigh specifically delivers a very cold and emotionally distant portrayal. Some would say that Isaac’s role was a blah, but I was surprised how he played that blah role. I am more used to him playing more emotional and straightforward characters.

we have a very innovative and proper sci-fi, that is bound only by it’s own nature, not by what is dictated by anyone else. And here comes the biggest issue why you, my dear friend, will not like “Annihilation”. Inadvertently or no, you will try to compare it to another sci-fi masterpiece “Arrival“, which this movie is not. I am not sure how much it was brought up during production, but “Annihilation” lacks that big, deep emotional punch in the face that “Arrival” had. With that it goes into more of a indie, arthouse territory (think “Melancholia“, maybe). It works very well for me, but does it for you?