"Cold Pursuit" is classic Liam Neeson revenge film but with dark humor and irreverence of the tone that will make it stand out from similar action films and will surely entertain fans of this genre.

I think we can all agree that at this moment Liam Neeson starring in the revenge action film would excite anyone. How many times can we have lovable hero fill the shoes of David fighting Goliath consisting of hundreds of organized crime elements? And yet, “Cold Pursuit” offers something other revenge films of Neeson don’t – dark humor and existential serenity.

Nels Coxman works as a snowplow driver in Colorado mountain resort town. He is just doing his job, keeping roads open during heavy snow season, says Nels, while humbly accepting Citizen of the Year award. Right at that time, his son Kyle is kidnapped by some shady characters. Next morning police calls Nels to inform him that Kyle has been found dead from heroine overdose. Nels’s life is shattered in a moment. He doesn’t want to believe that Kyle would ever use heroine! Then Kyle’s friend shows up at his shop. He tells Nels that Kyle was actually mistakenly murdered by local dealer “Speedo” who thinks he stole drugs from him. Nels is furious, but one name is enough to set up a man to a path of revenge and destruction. 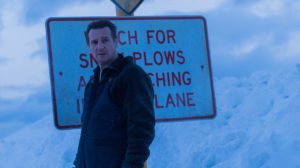 Not even snow can stop Neeson

Of course, there is a certain variation to the formula of Neeson’s Revenge. Nels is not a special agent, he is not anyhow proficient in martial arts nor has he acquired skills during his tenure as a snowplow driver that might be useful in killing and tracking people. He is an everyday man (though, honestly, I couldn’t quite make it out how a regular snowplow driver can afford a lavish mountain villa). Nels is broken and aimless when he learns about his son. But what brings him back to life is immense desire to bring justice to people who killed Kyle.

Whereas most of the films would have gone full action, “Cold Pursuit” takes different approach. In what can be considered as best homage to Tarantino and post-Pulp Fiction era crime cinema, film takes us deep into dark humor and irreverence territory. Secondary and tertiary cast is humongous. People talk random stuff, that has very little to do with the plot, other than give an (at times completely redundant) insight into minds of members of crime organization and what not. Script introduces characters, gives them several lines to say or do, just to have them die in a weird and gruesome manner. And though it might seem annoying, this trick actually brings much needed fresh air into the film and, I will have to agree, is extremely fun to watch. 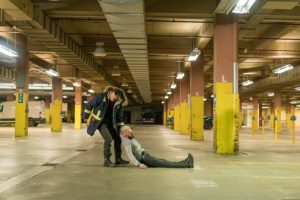 What do you do with the body of dead drug dealer?

“Cold Pursuit” is a remake of Norwegian film “In Order of Disappearance”. In fact, both films have same director – Hans Petter Moland. He approaches the subject not with action film in mind, but philosophically. And when I say philosophical, I don’t mean “You Were Never Really Here“, but “In Bruges” and “Seven Psychopaths“. Film is full with beautiful landscape shots of snowy mountains and winter sky, complimented with sudden blood splatter of brain and guts. And the more I think of it, more I see comparison of styles of Moland and Martin McDonagh. In fact, towards the ending, “Cold Pursuit” definitely steps into “In Bruges” territory with all the weirdness and chaos.

Problem is – Moland is not McDonagh. Film somewhat loses itself in transition from reality to surrealism. Final confrontation, that was supposed to be grandiose and explosive, feels rushed and kinda incomplete. Not anticlimactic, just incomplete. And while watching it, I constantly was thinking that something is missing. 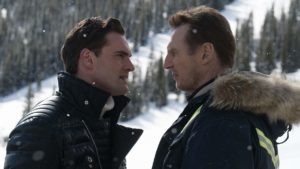 Since this is nth revenge film for Liam Neeson, he brings nothing new to the character. He is still same old man, who despite his calm appearance and demeanor is ready to choke people and knock their brains off using a shotgun. Even in “Widows” he was mostly the same. There is a huge supporting cast, naming all of whom would be pointless, but to name few who stand out despite given limited screen time – Tom Bateman (as drug lord Viking), Domenick Lombardozzi (his bodyguard Mustang), Tom Jackson (White Bull) and William Forsythe (as Wingman).

“Cold Pursuit” is classic Liam Neeson revenge film with a twist. Dark humor and irreverence of the tone does make it stand out from similar action films and will surely entertain fans of this genre. Others, probably not so much.