With impeccable portrayal by Frances McDormand, this film is a brutal and honest look at what a person can do when pushed to the corner

What do you do when you are forced into a corner? Do you give up? Or do you put up a fight? And who do you fight – the oppressor who left you there or the situation that made you be there? Or maybe you just want to let everyone know that you won’t be going down easily? Especially even if you know that whatever you are trying to do will not have any results, but instigate even more fights? That’s what probably passes through the head of Mildred Hayes, as she drives past three torn-down billboards next to her house.

Right outside City of Ebbing, Missouri, on the country road, that even most of the town people don’t know about, those billboards just stand there indicated long lost memory of visual advertising. No one has rented them since 80’s. They are made from wood, with rusted metal exterior. Even in their glorious days they were far from the quality of modern billboards. But that doesn’t matter. Mildred stops by them. A thought, a single idea. She notices the barely visible sign of the “Ebbing Advertising Company” that owns the billboard. And she knows what to do. Next day she drives to town and pays up a rent to have those billboards run an ad. Just words, no graphics she says. “Raped while dying”, “And still no arrests?”, “How come, Chief Willoughby?” they would say. What else can a mother of victim can do to have the answers? Turns out, the billboards are only the start.

What drives Mildred is simple – she wants answers. She wants for police to catch the murderer(s) of her daughter. And she is right. But police doesn’t have any answers. Not even for the lack of effort. There were DNA samples collected on murder site, but they don’t match anyone in the database. “Why don’t you make the database bigger? Why don’t you take DNA samples of all males age 8 and up?” Mildred asks, and Chief Willoughby replies 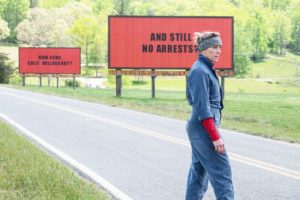 Mildred walks by the billboards

“That’s violation of civil rights”. And he is right. They are both right. Mildred also knows that. But what she can do? She is in the corner after all. What would you do?

Martin McDonagh, the writer and director of “In Bruges” and “Seven Psychopaths“, returns from hiatus to give us a very different work, unlike anything he has made before. It is not about mafia, assassins, kidnappers, psychopaths, writers or actors. There are no surreal, existential or metaphysical elements present. It is about real people dealing with real life problems. It is about broken mother, who sees no other choice than to instigate anger of society for abandoning her anger. About chief of police, who thinks he is doing everything he can. About racist police officer who can not contain his emotions. An advertiser who wishes to take revenge on police officers who berated him for his ways. Dentist who thinks he needs to punish Mildred for insulting beloved Chief. Young boy who just wants to forget all that happened to his sister. It is about society being forced to act and show their true face. And all because Mildred decided to put on some billboards.

As I said, this is the most unlikely McDonagh film so far. His style still shows up though. Be that in violent moments or black comedy elements. He also does a good job complimenting storyline with one single flashback. And it’s not even related to the crime itself. When your regular director would have shown the actual death scene or the brutal discovery of the body, mother hugging the burnt corpse of her child, crying at the sky, blaming God, etc. McDonagh goes away from this cliches. Flashback is emotional, not visual. McDonagh doesn’t need to show the physical pain of the mother, he just needs to show elaborate struggle of her to come to terms with her trauma.

There is an interesting twist (“turn” would be a better word, actually) towards the end. When you are thinking where exactly the story is going, it makes a sudden, but steady turn. We follow it closely, it pushes us deeply into our seats. And the resolution of the film couldn’t have been any better. The ending is probably the only place McDonagh’s classic style finally shows up. This is where you understand what the whole story was about.

Mildred knows police done all they could. She is not blaming them. Chief Willoughby is very sympathetic to Mildred’s case. He knows he failed her. He feels guilty about it, more than anybody. And even though they have nasty run-ins, both of the characters express gratuity towards each other. Mildred wants closure that she never got, Willoughby understands that he failed one person of the community he chose to protect. However, no one else sees this understanding between characters. Town’s folk think of Mildred either as an ungrateful bitch who hates cops or as a way to shove the police back on their places. No one, literally not a single character truly (at some point even Mildred herself) understands and sees her true intentions. 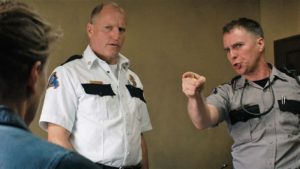 Dixon and Willoughby “asking” Mildred to take billboards off

Mildred is not a hateful bitch. Yes, she is strong independent woman, and we can see that with her interactions with town hecklers, her depressed son, her wife-beating ex-husband, revengeful police officers. But when she is alone, she is broken and shattered mother who lost her daughter in the brutal murder and still can’t come out of that. This is her way of dealing with the trauma. Even if that means she has to break her relationship with her son or is totally oblivious to the only other person who would help her.

Then there is a character of racist, homophobic, arrogant, ignorant, and just plain stupid police officer Jason Dixon. How he became a lawman is oblivious to everyone in the film. Smart enough, McDonagh doesn’t turn this guy into something even worse, he masterfully works around the character to make him essential to the plot of the film. That character development, though might seem a little hasty, still is the biggest arc of the film.

Frances McDormand will receive an Oscar for her role of Mildred. She was born for this role. Only she could have carried this character to the places  and deliver us a performance worth watching

the film. Even if you wouldn’t enjoy the film, you would agree that her performance is something on completely different acting plane. Always charismatic Woody Harrelson plays police chief Willoughby. Unlike other films, which put him in more of a Bill Murray-esque semi-crazy, semi-surreal roles, here Harrelson plays a straight character. His chief is powerful and vulnerable at the same time. You can see struggle in his face to come to understand Mildred. 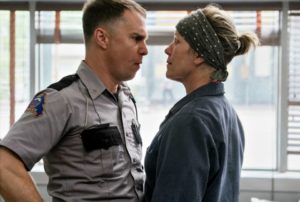 Mildred not afraid to confront police

Sam Rockwell plays Jason Dixon and he will also receive an Oscar. But that’s not because of the role. That’s because he is able to deliver a believable character, with all his faults. There is not a single thing you will like about Jason Dixon. Rockwell doesn’t play him as a clown. Which is as difficult as it gets, because character is written like a clown. What Rockwell does instead is he gives the character that little something, a detail maybe, to make us understand who he is and why he is like that. Also I would like to mention Peter Dinklage who plays an episodic role in the film, and yet delivers the biggest point of the whole film.

“Three Billboards Outside Ebbing, Missouri” is a powerful film that has extremely well-drawn characters. Their struggle is real, emotions are pure and reactions are brutal. Strong performances by cast members makes this film an incredible thing to watch. But this film is no “In Bruges” by any means. In my opinion, that film deserves to be included in greatest films of all times for the transformation of characters, their drives, exploration of human psychology and symbolism. “Three Billboards” is an impressive film, but McDonagh is not able to deliver that punch that “In Bruges” had.