With incredible attention to characters and surprising performances by whole cast, "Widows" captivates and redefines the whole concept of a heist film, but slow burn ultimately affects the overall pacing.

Heist films usually present the actual heist as fun, interesting, witty endeavor. Actions of heroes are usually justified by making the antagonists bad, bizarre and deserving to be robbed. Heist thus becomes a major story arc. Not so much with “Widows”.

Veronica is happily married to famous thief Henry Rawlings. She knows what he does and how they can afford live in luxurious apartment and have a chauffeur. She stays away from details of his job and accepts all risks coming from his profession, because in his thirty-year-old career Henry never made a mistake. He uses same experienced crew every time, meticulously planning his next heist. But something does go wrong. Henry and his team are assaulted by police during their latest heist and are killed in a fiery explosion. Veronica is in deep sorrow, but she has no time for grief as local crime boss Jamal Manning pays her a visit. Apparently Henry was stealing from him when he was killed. See, this was the money he set aside for his political campaign. And Veronica has just one month to return what Henry has stolen from him. Veronica realizes that her only chance to maybe survive all this is to gather a team and execute the next heist on Henry’s list. And she knows who to turn to – widows of Henry’s teammates. 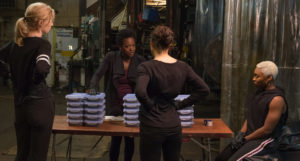 Let me just stop you there. If you think that it turns into “Ocean’s 8” you are very deeply mistaken. In probably the only realistic way possible, “Widows” show these poor woman not as random professionals who have heist skills that complement each other as jigsaw puzzles, but as broken individuals who have to deal with aftermath and consequences of their husbands’ deaths. You will be surprised how well each of them is defined. Veronica is a teacher who is used to posh life Henry provided her with. Linda’s husband lost all his and her money on gambling and even pawned her clothing store. Alice was constantly beaten and abused by her husband. Amanda is left with 4-months-old baby to look after.

These women are against Veronica’s proposition. But they know that the won’t be able to survive on their own. Each and one of them are so intricately written that it is almost impossible not to feel for these women. And pretty soon we understand why they agree to execute the heist. Yet, they understand they know nothing and possess no skills. But unlike guys in “American Animals” they don’t sit and watch heist films to find out how to operate. Instead, they solve one problem at a time. Or try to solve. 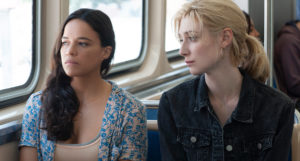 Linda (Rodriguez) and Alice (Debicki) contemplating whether to join Veronica

Tensions gradually increase and reach peak at the final heist, which you also might expect to be a big bang deal. But you keep forgetting that heist is not the main plot of the movie. Heist is fast, brutal and feverish. Nothing like fun and intricate adventure of “Logan Lucky“. No sir, you will witness completely different action. After all it is all about characters.

Speaking of characters. There is so many characters, maybe the only movie that had bigger list would be “The Departed”. But unlike Scorsese’s masterpiece, “Widows” spends time with each of them, defining them, showing who they are, what motivates them and what they want. These characters are so colorful, so vivid and so dimensional that they will not leave your mind long after film ends.

I am a little on the fence about Steve McQueen‘s direction. On one side, he does an impeccable job. Shots are well filmed, cinematography is amazing, editing precise, acting flawless. There were several shots in “Widows” that surprised me in intricacy and attention to detail. One shot is a continuous shot of Jack jumping into his car with his political aide and driving through town to his house. Other shot is a tracking crane shot that starts with a train on a railroad and then pans to the driving car. Both of them just made me want to stand up and applaud McQueen right there in the cinema. You can feel that he has total and complete control over the artistic aspects of the film.

And here is where I had some reservations. McQueen spends incredible amount of time on deliberations and problem of main heroes and exploration of secondary and tertiary characters. This drags overall pace of the film at times to total halt. Don’t get me wrong it works well, but you can feel that maybe he could have sped things up and get to the point faster. Sometimes even best directors need to have someone to oversee what they are doing. 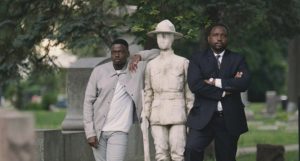 Attention to each and every character implies that each actor portraying said characters need to perform on top level. And this what makes this film shine. Viola Davis is a national treasure and role of Veronica is just made for her. She steps into her shoes and never even once give an impression of falseness. It is so spot on that actually even gets creepy, to be honest. Supporting cast doesn’t fall behind from her. Elizabeth Debicki, who is usually reserved in her performances is almost unrecognizable as simple, but determined girl. On the other hand we have Michelle Rodriguez who seems to be eternally stuck in “Fast/Furious” franchise finally get a proper role to shine and does that brilliantly.

Then we have a supporting cast of such heavy-hitters like Colin Farrell, Robert Duvall, Liam Neeson, Daniel Kaluuya, Brian Tyree Henry, etc. This list goes on and on. And you might think are there just for sake of being there, but “Widows” gives each one of them something to do and showcase their acting range.

“Widows” is very well made heist film which redefines the whole concept of a heist film. With incredible attention to characters and surprising performance by whole cast, film captivate throughout but slow burn ultimately affects the overall pacing.