You Were Never Really Here

Film completely concentrates on the main character, so much that nothing else matters. And despite phenomenal performance of Joaquin Phoenix, film falls short of becoming a disaster.

You have seen “John Wick,” right? Now imagine “John Wick,” but without ANY action scenes? Got it? Now imagine “Drive” like dedication of director to turn the original John Wick into an arthouse flick. Are you getting anywhere? Well, if you can’t and are curious of what it might look like, go ahead and watch “You Were Never Really Here.” Film that won Best Screenplay and Best Actor at Cannes last year. If my story though doesn’t seem to make you interested, stay away from this film. It is not for you. Just take my word.

Joe is some kind of hired killer. It doesn’t say what or why or how. All we know he gets tips from some guy who works in a skyscraper and paranoid Joe makes him run his messages through a grocery shop owner. Joe is messed up to the core. He is suicidal. He has some kind of childhood trauma involving his father beating his mother and Joe trying to strangle himself. Maybe. Not sure. Also he might have PTSD from possible stint in an army. Don’t take my word, it might be my imagination. Between dealing with his depression/trauma/suicide attempts/care of his ailing mother/randomly staring at (not from) windows, grocer tells him that his “handler” wants immediate meeting. His handler in the skyscraper tells him of one New York Senator who is looking for his daughter. Her name is Nina, she is 14. Apparently she has been on the run and her father received (supposedly) a tip about (supposedly) underage sex bordello where her daughter is (supposedly) held (supposedly) against her will. He wants Joe to rescue Nina. And inflict brutal damage to the owners.

I am not going to split this, since “You Were Never Really Here” is written and directed by Lynne Ramsay in the most arthouse way possible. First of all, film is not about the rescue of Nina. As a matter of fact, the only thing it is about is character of Joe. Story itself is not only on the background, but is pushed so far behind that at some point it is impossible to even understand what is happening and why. Not only director gives a very little clue about it, she deliberately hides it. Like what exactly happened to Joe in his childhood? Yes, apparently her mother was in an abusive relationship, he shows obvious signs of PTSD. Does he, though? He is constantly popping pills of what and why? Does he have depression? Why is he suicidal?

I am not saying for a film to force feed us some bullshit narration or ridiculous exposition. But deliberately holding off on information? I mean I had to go to Wiki to confirm that he actually supposed to have PTSD. Film wants you to take it all for granted. It’s like all we need to know – Joe is suicidal. Deal with it. But then why give that constant flashbacks? Joe is very devoted to his mother, but even she is not holding him from killing himself. Not to that extent at least. He is supposedly very brutal. Which is never shown. All he does is walk around with a hammer. Oh, yeah, dead bodies around. With a head injury. Joe must have killed them! So brutal, indeed. “You Were Never Really Here” is about Joe. It is not about ANYTHING ELSE.

Then there is style. You expect poetry in motion, beauty of cinematography, exclusivity of editing – all what arthouse films are famous for. But you get virtually none. It’s like the film is made to mirror the absurd, messed up, degenerated brain of our main hero, Joe. There is an amazing soundtrack, probably one of the best execution of music in film. There are weird shots of randomness. Dialogues are barely hearable or understandable. Deliberately made so. Again, had to Wiki for some plot details. Joe looks like a homeless person. “You Were Never Really Here” looks like a brain of homeless person.

However, after a while you see the patterns. There is a method to the madness to the film. Seems it’s not totally random. That brings some level of coherence to “You Were Never Really Here”. Otherwise, watching this film would have been like watching paint dry. Then again, if we are seeing a mirror of Joe’s brain, why there is a pattern? Joe’s brain is shattered and barely holding together, it is not structured, there is shouldn’t to be a pattern. Just a paradox, I guess. 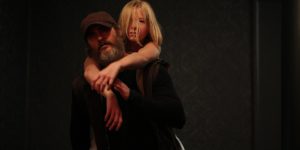 Joe (Phoenix) tries to save Nina

Making a film about mental image of a character implies existence of superpowers for the actor who plays Joe. And Joaquin Phoenix is out of this world in his portrayal. Without doubt, this film exists only because of Phoenix. He is so believable, he basically lives as a character. He proves once and for all how endless his abilities as an actor are. It is almost impossible to describe how he channels his emotions and his skills into the character of Joe. Rest of the cast you should forget about it. There are barely there, thanks to director. One might even say “they were never really there” at all. Get it?

“You Were Never Really Here” is an arthouse flick that wants you to ignore everything that you are used to seeing in a film – backstory, action, reaction, situation, supporting cast, resolution, ending. It wants you to concentrate on our main hero. Live in his shoes and feel what he feels. And hope that you won’t commit suicide in the meantime.