"Avengers: Endgame" pushes the boundary of what can be done in action film, while maintaining interesting story and answering most of the questions left from previous film. Unfortunately, film spends too much time on tearjerker moments and emotional context.

Ever since credits rolled on “Avengers: Infinity War” a year ago, viewers were left with thousands of question. What will happen next? How the beloved heroes would bounce back from the loss to Thanos? And most importantly what will happen to the heroes after this? The wait is over and “Avengers: Endgame” not only answers these questions, but also opens bunch of new ones.

Right after the events of “Infinity War”, members of Avengers are trying to figure out the way forward. And while some of them are set on to taking revenge on Thanos, there are those among them who are done fighting and all they want is accept the fate and move on. Unfortunately, this is not as easy as it sounds. Because despite their superpowers after all they are just humans. And living with idea that they could have stopped Thanos takes it’s toll on every single member of the group. So when the chance arises to fight back, they would throw away all deliberations, insecurities and struggles and will do everything they can to get back at Thanos. And doesn’t matter how minuscule that chance is. After all we are in the endgame. 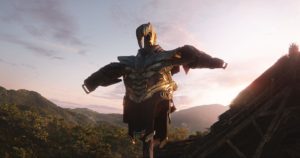 Despite not being Marvel fan at all, I admit I was satisfied the way “Infinity War” ended. Film pushed the boundaries of acceptable rules of engagement with this kind of material. I also enjoyed Thanos character very much, as he was not a one-dimensional dummy set to fill the role of obscure villain. So, although I didn’t have any emotional connection to the heroes, I was very much invested in seeing how the filmmakers will resolve the conflicts of first film. This was also fueled by the fact that two MCU films that came out in between this films (“Ant-Man and The Wasp” and “Captain Marvel“) offered no answer at all.

The result is whooping 181 minutes long. “Avengers: Endgame” doesn’t hold back and dives heads on into the film. The emotional state of the heroes after big loss and their struggle to cope with it plays very nice at first, however the film then gets into a slow slump. You would think that “Avengers: Endgame” would have it easier. After all there are not hundred superheroes to concentrate on and give every single one of them adequate screen time. So, there is a chance to instead use the allocated time to explore each of the Avengers members individually. This works well for most of time. We get to know what each of them thinks and how their emotional state has been affected by knowledge that they have failed this miserably. Unfortunately, it means bunch of mopey and quasi-teary moments that eventually start dragging film down. 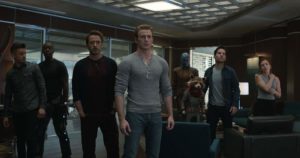 “Avengers”, or what’s left of them need to assemble for one more time

But when things start happening, script really picks up. There are very bold choices that screenwriters make and film suddenly sets off into a completely fresh territory. In a total twist of events, film suddenly forgets its emotional context and gets to be fun and extremely entertaining. Jokes and situational gags make comeback and they land very straight and spot on. But right when you think “Avengers: Endgame” will be fun, film suddenly makes a turn to re-introduce emotional aspects and in a very predictable tone foreshadows what to expect of the ending.

Huge let down for me was Thanos. Despite the first film, Thanos is completely straight character with no backstory, no motivations and no explanation of his actions. Film spends literally zero time on exploring his character, except maybe a short speech. It’s like filmmakers not even tried to bother with him and just say us “yeah, just watch the first film”. And, in contrast to “Infinity War”, Thanos turns into regular bad guy who just wants to slash and cut.

I am not expecting anything smart of the films like “Avengers: Endgame”, but this film left me with a lot of questions. And I am not talking about borderline idioitic scientific/psychological/theoretic implications of actions of heroes, but just pure logic of and acceptance of rules of engagement set by previous films. Without going into spoilers, it just didn’t make sense how some things were deliberately told to us not to be possible, suddenly becoming acceptable just for the sake of the plot progression and resolution. 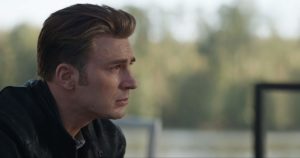 We will spend time crying, instead of fighting

“Avengers: Endgame” pushes the envelope of blockbuster films to the limit, just like “The Avengers” did. Eventual battles are big, bold and just insane in intricacy. Maybe not as crazy and elaborate as “Avengers: Infinity War“, but still close to it. Directors Joe and Anthony Russo did a very good job maintaining watchability of the fights, and overall dynamics of the script.

Unfortunately, Russo Brothers tried to make “Avengers: Endgame” an emotional film. It means that for the huge amount of time people either cry or try not to cry or are just depressed. Which eventually turns this film into another “Return of the King”. I understand the idea to keep the viewers invested, but people came to see CGI superheroes fight CGI monsters and get their answers. And I am sure directors would have achieved same amount of emotionality if they would have cut a good 60 minute chunk of the film or shortened some of the scenes.

Editing is another thing that has suffered in “Avengers: Endgame”. Whereas in “Infinity War” it was fairly easy to track what is where and when, this got really sluggish in “Avengers: Endgame”. There are some scenes that happen in parallel, but cuts between the scenes are very lazily done. As such it feels that we spend more time on emotional scenes than fun scenes. And going up and down, up and down gets really annoying soon. Same thing can be said about last battle. I just hated that they show huge ruckus of fight, but when concentrating on single heroes, they suddenly have time to hug, talk, embrace each other, share feelings and hug even more. It’s like all the fights get suspended immediately. 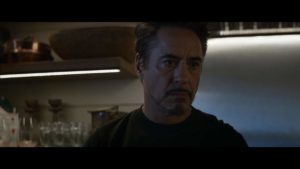 Downey with his best yet performance as Tony Stark

I would like to specifically mention Robert Downey Jr. and Mark Ruffalo among the standout performances. Downey, for the first time, feels utterly genuine and completely relatable. There is absolutely no fakeness in his performance. It is really obvious how he goes through every single emotion. Which actually means that he was just faking it all in previous films. Ruffalo again shows his superb acting skills. I am glad that directors once again give him something else to do rather than “Hulk Smash” routine. Among the other performance I did also enjoy Karen Gillan as Nebula, which is given much more to do than her usual self and excels just like in “Jumanji: Welcome to the Jungle“, and somewhat distant acting of Chris Hemsworth.

“Avengers: Endgame” is superbly made blockbuster that pushes the boundary of what can be done in action film, while maintaining interesting story and answering most of the questions left from previous film. Unfortunately, film spends too much time on tearjerker moments and emotional context that dilutes the effect.