Despite flaws with the writing, "Captain Marvel" is entertaining and engaging. It's not as bad as half of MCU films, but it's not better than the other half. However, it doesn't bring anything to overall storyline and is absolutely redundant.

After “Avengers: Infinity Wars” managed to deliver a gut-punch ending (that even yours truly had to admit was quite surprising), the only question left hanging in the air was “Who is Captain Marvel and how does she fit in all this mess?” So, here is a movie about the origins of the most formidable and apparently strongest Marvel superhero (correction – MCU superhero) that I had no need to see, to know what is it all about.

Vers has no memories of her past. Instead she gets constant nightmares. They tell her of a weird fight on a distant shores where some alien creature tries to kill her. These dreams, and her inability to shut down her emotions and “think with head instead of heart”, prevents her from becoming ultimate warrior of Kree Empire’s elite Starforce team. Despite this, her mentor Yon-Rogg takes her to next mission. It is a rescue mission involving infiltration of Skrulls, alien race that has been long-time enemies of Kree. But, the mission turns into an ambush. Skrulls capture Vers but she finds an opening and escapes captivity. She crash lands on a planet C-53, with a strange feeling that she has already been to this planet before. And no wonder, because C-53 is actually Earth.

Let’s just agree that writing in MCU is not the strongest. So, if I would be grading this movie on originality, subtlety, sophistication, common sense, rationale, and character evolution, I would give this film 0 stars. Instead, MCU films (especially, later ones) are famous for witty dialogues, funny one-liners, exciting action sequences and character interactions. And while MCU films like “Ant-Man and the Wasp” and “Black Panther” excel in this, I can’t say the same for “Captain Marvel”. Vers is written to be serious, with a twist for humor, but that absolutely doesn’t fit her nature. One- 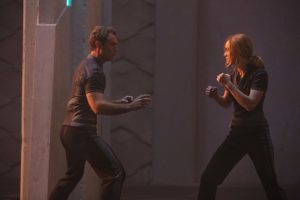 And we will fist-fight! Because it is awesome!

liners and jokes she delivers feel very out-of-character for a person who is struggling to find who she is. Yes, there are some funny moments, but none of them involve the wittiness and playfulness of Vers and are 100% situational and rely on nostalgia (Blockbuster! RadioShack! AltaVista! Pagers! Yay!).

Action sequences have me at a crossroad. Some of them felt redundant (especially, in the first part of the film) and some of them felt that they were included only for the sake of making film more action-oriented and had very little to do with actual plotline (especially, towards the end). Not to spoil anything, Vers learns something about her past (so cliche, by the way) and it all seems to makes sense at first. However, now thinking back, some actions that she and other characters have done before that revelation, now meant absolutely nothing. And character interaction, which mainly consists of Nick Fury saying something and Vers replying with some supposedly funny jibe, gets old very quick.

Worst part? We all know how it ends. There is absolutely no need to watch this film. Not because it is bad or good it offers nothing new that would be so groundbreaking or revolutionary to the plotline. But, you will say, so does “Captain America“, how about it then? Well, the role of Captain America in the Avengers might have been known, but the way the film ended made absolute sense and actually tied up a lot of lose ends. Also, now we have two Captains?

Taking into account that directors Anna Boden and Ryan Fleck had almost no experience in action films, they both did a very respectable job with “Captain Marvel”. Film’s action sequences are well streamlined and hence, it doesn’t lag behind other MCU films. In fact, it actually is better than some sluggishly paced films like first two “Thor” films. Directors manage to actually thread in some emotional exposition sequences with no sacrifice to overall pace. But despite all, there are some nitpicking moments. Editing is just pure torture. As in all MCU films “Captain Marvel” is not devout of bringing characters with superhuman abilities and/or uber-technological weapons to mere fist-fights and then cuts between shots every three frames. Cinematography is all hindered by constant camera jumps and close-ups of CGI goodness.

I like Brie Larson. I really do. She is an amazing character actor, with very strong emotional output. And even in “Kong: Skull Island” with heavy action scenes, she managed to deliver sincere performance. However, she just doesn’t fit as Captain Marvel. Or the version of the character that I see on the screen. Yes, she is totally delivering the emotional aspect of the character. She manages to be raw, strong, powerful and emotional. She is a very straight face character. What she fails though when film tries to portray her from comedic and action point of view.

Samuel L. Jackson is a national treasure. He delivers everything in a famous to him manner, but it just never gets old. Casting and actual performance of Ben Mendelsohn was quite surprising. He usually plays ridiculously one-dimensional villains, like in “Ready Player One” or “Dark Knight Rises“. In “Captain Marvel” he finally gets his chance to shine, albeit being behind heavy makeup.

Despite all the flaws with the writing, film is entertaining and engaging. It turns out to be not as bad as half of MCU films, but it is not better than the other half. It doesn’t bring anything new to overall storyline and because of this, honestly, is absolutely and utterly redundant.