Jumanji: Welcome to The Jungle

I’ll be honest with you, when Sony announced sequel for “Jumanji” I thought they were just stupid. Not because I thought it is a bad idea, I just couldn’t see how the new movie can be done to top the original. That one was made in a different era. Dinosaurs just started walking couple years back, aliens just blew out Empire State Building and it will be couple more years before The Matrix. In that context, the original film was a dream come true for any teenager living in 90’s. Board game coming to life? Check. Jungle creature running amok? Check. Robin Williams in one of his best roles? Check! What else do you need? And then they made the sequel.

In 1996, game finds its new owner – teenager Alex. But he is not interested in the board games. After all, it is 1996, who plays board games anymore? He tosses it aside. But then game devises a plan to lure Alex in. It becomes a video game cartridge for a game console. And it works. Alex plugs it in and is sucked into the game. 20 years later, four high school kids get into Breakfast Club style detention – Spencer (shy nerd), “Fridge” (football jock), Bethany (Instastar) and Martha (social outcast). As punishment they have to clean old storage room. It is there they find abandoned old game console with a game cartridge called “Jumanji”. To waste time, they plug it in and each select an avatar. Next thing they know they are sucked into a jungle! But turns out they are not who they are but the avatars they have selected, which are complete opposite of who they are in real life. Spencer becomes Dr. Bravestone (big and strong archaeologist), “Fridge” – “Mouse” (Dr. Bravestone’s short sidekick and zoologist), Martha is Ruby Roundhouse (dashing assassin) and Bethany turns out to be Professor Oberon (fat and clumsy cartographer). Soon they find out that the only way to get out of the jungle is to win the game. The game called “Jumanji”. 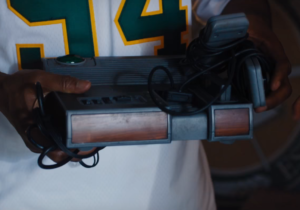 Jumanji is now a video game!

Getting the film right was a difficult task and I think writers were able to accomplish that. Firstly, I really enjoyed originality of the plot. Board game idea in the first film was awesome, but why use existing material? Having characters play video game and be part of it opened new possibilities for story development. You are not bound anymore to our everyday world, you can explore and introduce all kind of crazy stuff of the world of Jumanji. This is something that was very vaguely mentioned in the first film and honestly I had a lot of questions of what exactly is happening in the jungle.

Second, they introduce new challenges when our original characters are transformed into totally opposite avatars. It makes them go on the journey of self-discovery among everything and also creates an amazing situational laughs. Third, “Jumanji” is a video game movie. Without even being based on a video game, creators were able to give a perfect look and feel of what a computer video game is. Starting from discovery of life bars and resurrections after death to explanation of game world mechanics, NPC’s, level designs, boss challenges and even the application of special skills and teamwork. All this literally makes “Jumanji: Welcome to The Jungle” best video game adaptation. 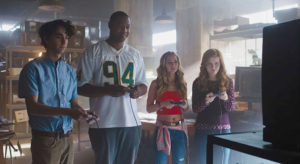 First film works so well because it had a weird balance of teenage action/horror with comedy and adventure. I mean, the film starts alarmingly, with little boy getting sucked into the game. And it goes on like that all the way until the introduction of Robin Williams’ character. His appearance is what gives otherwise pretty dark film a lighter side. Creators of the sequel went another route. They no longer had charismatic Robin Williams in their possession. Instead they use comedy elements straight from the start. It then goes to introduce the awkwardness of transformation and has main heroes interact with each and with their new bodies.

Everything works in Jumanji from directing perspective. Though action scenes seemed to be pushed a little to the second plan, I felt it was nice not to make them too invasive. There is enough of ass kicking and head punching and even body slamming. That is topped with some redundant puzzle solving and exploration. Director Jake Kasdan (long time collaborator of Judd Apatow) concentrates our attention on the interactions of heroes and I think it works the best from all perspectives. 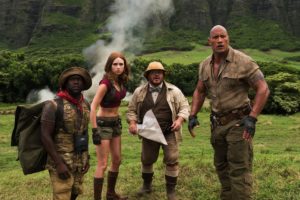 Big credit to actors, despite their appearance you can definitely see the people who are trapped in them. Dwayne Johnson (Dr. Bravestone) has a natural charisma of a comic actor with muscles and has amazing chemistry with Kevin Hart (“Mouse”). It’s not the first time they are partners in the movie, but I think so far it is their best. Both of them deliver solid performance. Jack Black (Professor Oberon) is very fun to watch, because he is given a complete freedom to clown around. He plays the girl stuck in the grown-up clumsy body and it is amazing how he does that. Karen Gillan plays Ruby Roundhouse – deadly karate expert who walks in short top and shorts (direct reference to Lara Croft from original series). She is sexy, strong and a total badass. At the same time she can easily portray insecurities, self-loathing and social awkwardness of the teenage girl trapped in her.

Despite all initial fears and expectations, “Jumanji: Welcome to The Jungle” turns out to be a very fun movie to watch. Decision to use the game in a new context and have avatars play the game pays off very well. By no means this film will be as close to the heart of modern teenagers as the first “Jumanji” was to teenagers of 90’s, but I am sure this film will deliver it’s own part of entertainment and be remembered as possibly one of the best video game adaptations. Especially since it was not even based on a video game.