Ant-Man and the Wasp

By using talented cast, witty writing and good pacing, film gives us a lot to laugh at and forces us to suspend our doubts of dubious plot.

There is no doubt “Ant-Man and the Wasp” is the lightest of all MCU films. Which, if you ask me was a very nice direction studio heads have selected after darker “Avengers: Infinity War“. But comedy is there not only to offset some emotional feelings – light flair and comedy masks an inconsistent and ridiculous plot.

Thirty years ago, Janet van Dyne sacrificed herself by jumping into quantum realm to stop nuclear bomb. For all these years her husband, Dr. Pym, has believed she died. But after Scott Lang returns from quantum realm in first film, Dr. Pym realizes that there might be a possibility that his wife is still alive and stuck in quantum realm. So, with help of his daughter, Hope van Dyne, he tries to create a device that will help him find Janet. Unfortunately, this device attracts attention of several individuals, namely a criminal Sonny and mysterious creature “Ghost”, who is in constant “phase shift” and can pass through walls. They could have asked for help of Scott Lang, but he is unfortunately indisposed, due to his involvement with Captain America. And more than that, he is preoccupied with having quality time with his daughter. But even if he could help them, this work might be too much for Ant-Man. Maybe it is time for Hope to don her superhero costume and become Wasp!

What strikes out from the opening of the film is tonal shift in the narrative. For the first time in MCU history we have a pure comedy on our hands. Action scenes is complimentary, just there to spice things up. And though some elements of the story do get dark towards the end, film still manages to stay on the lighter side. In that sense, “Ant-Man and the Wasp” might remind you of “Deadpool” just without any shenanigans. 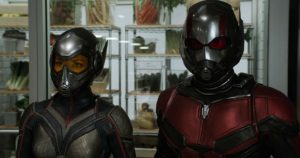 Ant-Man (Rudd) and the Wasp (Lilly)

And there is a lot to laugh at. For a certain amount of time, film explores slapstick comedy to a very good results. Back-and-forth jabs between Lang/Ant-Man and Dr. Pym have more sarcasm to it than the original film and is very funny to watch. Then of course, Lang/Ant-Man’s man-child is offset by always serious Hope/Wasp. And to draw comparison with “Deadpool” again, Lang uses same technique of questioning film logic by borderline breaking the fourth wall. Lang’s friend Luis is back as a comic relief and he is even funnier than first film. I liked how writers incorporated his fast talking and highly stylized retelling of events and it was truly the highlight of the film. Overall, I think the comedy was very well written.

Which is what saves “Ant-Man and the Wasp” because the plot itself is ridiculous even by Marvel standards. And I am not talking about the scientific part of it. Film throws at us bunch of smart “sciency” words in fast succession, trying to mask and present everything as something plausible, hoping audience is stupid enough not to question the story. And questions I have. A lot actually. So many that the question whether Pym’s wife would be still alive in the “quantum realm” for thirty years is the least dubious one.

One thing I’d like to compliment is the bad guys. I can’t call them villains, because technically they are not traditional villains. And big applause to writers for trying something new (maybe not very successfully, but still) and not shoving a standard, cliché villain in our face. Writers at least tried to make them multi-dimensional. They have desires, motivations, conscience and doubts. They are not there to make good guys stand out, there are there to make film stand out. 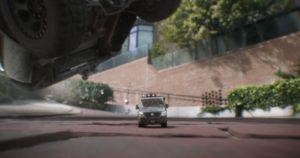 It’s hard to run away from pursuit when you are tiny. Or is it?

Peyton Reed returns to direct “Ant-Man and the Wasp” and this time he has reins from the start. This makes “Ant-Man and the Wasp” feel much better than first film, which had that weird hybrid taste to it. Overall, Reed delivers a very enjoyable product. He manages to shoot both comedy and action scenes with equal enthusiasm. Taking into account the constant shift in the sizes of the heroes and extensive CGI that have been used, I just have to commend him for delivering a film that is not lost under its own weight. This specifically is seen in the restaurant scene. And most importantly, film flows very naturally and never feels like dragging.

But there are, of course, some problems. While “Ant-Man and the Wasp” is very watchable film, this is maybe the least cinematic of any MCU films. There are no heavily decorated, color graded beauty shots. Cinematography is there just to tell the story, nothing more, nothing less. But, maybe that is what is needed? Why complicate a light film with over-the-top sunsets, experimental framing and weird editing?

I am not a big fan of Paul Rudd, but in “Ant-Man and the Wasp” he truly shines. He is a wonder to watch, no matter of the scene he is in. His comedy and jokes never feel fake. Evangeline Lilly plays her role with determination and brute force to show that she is not a damsel in distress, but, on contrary, is there to actually fight. Michael Pena returns as Luis and he steals all the scenes he is in. I also enjoyed Laurence Fishburne as Bill Foster. However, I was not really happy with Hannah John-Kamen, who plays Ghost. I don’t think she was able to show the tragic side of the character she played. Not sure if it’s her fault or director’s choice. Also film underutilized Walton Goggins, who basically gets same treatment as in “Tomb Raider“.

“Ant-Man and the Wasp” works really well, because tone of the film is firstly a comedy and then action. By using talented cast, film gives us a lot to laugh at and forces us to suspend our doubts against dubious plot.