Despite ridiculous number of superheroes, this film has great pacing, a lot of laughs and finally a worthy villain that makes it quite an enjoyable and fun film to watch, even if you are not a Marvel fan

It is hard to write about “Avengers: Infinity War” because of the scope of the project. Marvel has produced 18 films prior to this to finally smash it all together in one single film. They had a big task on their hand. Not only they had to show over 25 different heroes and give them due screen time, but also have them face a worthy villain – Thanos, in this case. As such “Avengers: Infinity War” delivers pretty much everything what Marvel Studios have intended.

Thanos, who appeared in multiple end-credit scenes since first “Avengers”, boards Asgardian ship carrying refugees from Asgard (right from the end of Thor: Ragnarok). He is after so-called infinity stones – stones said to be created with a Bing Bang and carrying enormous power. There are total six of them, and the being that possesses all six stones will have unimaginable power over all Universe. Thanos would like to be that guy. He has already obtained Power Stone and now he is after Space Stone. No one on the ship, including Thor, Loki and Hulk are able to stop Thanos and he relentlessly acquires the Space Stone. Now his vision is set to other stones. Two of them are on Earth, first one with Vision and second with Dr.Strange. One more stone is in possession of Collector. The whereabouts of last stone is unknown. But that will all hardly stop Thanos. Except maybe the Avengers? 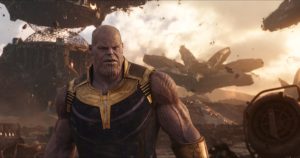 Thanos (Brolin) ready to use his power

I have to give credit where it’s due: Marvel took all the complaints from previous films and tried to address them. Villain problem has long been a big issue for MCU. In “Avengers: Infinity War” Thanos is unlike any other bad guys of MCU. He is this big gargantuan steamroller coming down to destroy everything on his path. He is strong and he is shown adequately as such. We never doubt his power, nor are we fed irrationality with regard to it. And though his ultimate goal to obtain all the stones is borderline ridiculous, at least he is not a one-dimensional character. He has a proper backstory and enough drama involved. Mind, that doesn’t make him well written, but at least he has more motivation and there is also a hint (very thin) of the emotional aspect of the character. Something that “Black Panther” also did achieve.

Also, unlike recent MCU films, “Avengers: Infinity War” is relatively fun to watch. Introduction of more comical “Guardians of the Galaxy” heroes and addition of light-themed Spider-Man opens up an avenue for writers to stitch in comedy elements into the story. By having random heroes grouped up also offers viewers a lot of situational comedy. Especially during first half of the movie there is a healthy number of laughs. Eventually things had to get more serious and towards the end this comedy is gradually phased out with much serious tones.

Which brings us to the problem of over-population of the film with the Marvel heroes. There are just a lot of them. And some of them are naturally given more screen time than others. For good or bad, writers tried to space out and give everyone something to do, but still there was a number of characters that a) had to be included because they are supposed to be there b) characters who literally bring nothing to the table, yet still are given much to do and c) characters that could have been essential but had limited screen time due to plot progression. Regardless, fan favorites do get the majority of the screen time, and fans will be happy.

Last of course, and my biggest issue with the writing, is that writers had to artificially put some high-power characters into artificial blocks. These blocks at times make very little sense and you feel they are there just to make sure Avengers don’t suddenly get an upper hand in the battles. Or even destroy Thanos five minutes into movie. Writers also tried to cut corners introducing never before seen abilities and skills to the characters. Like with Iron Man’s suit. It seems with every movie Tony Stark adds something more and more ridiculous. I wouldn’t have been surprised if he suddenly would turn into Optimus Prime.

Again, to give due credit, the fun and entertainment push all this ridiculousness to background and we are able to suspend our disbelief. Then, of course, there is an ending, which will be much discussed. I found it certainly is an appropriate ending for the film. Not spoiling anything, I would have been really pissed about the film if they did something else. It opens some new areas for the coming sequel. BUT, however controversial the ending might have been, I know exactly how the sequel will end. And it just spoils the next film.

Get a good look at Avengers, it is last time before battle you can actually understand who is who and where

Big applause for Anthony and Joe Russo for delivering a film that is not only fun to watch, but also stays on track despite all the freaking superheroes cramped into one film. Film is 149 minutes long, but you will never have a chance to yawn. It is full with adrenaline inducing action sequences which are carefully balanced with slow, emotional scenes. Directors understand that film is supposed to be entertaining, not just a bland CGI punchfest. Editing was nicely done, managing to stay on track despite multiple locale changes. My other concern was kid-friendly PG rating, but film pushes it so much that it easily could have been R-rated.

Despite all these good stuff, Russo brother also couldn’t escape what the others before them failed at. In the climactic scene the whole battle turns into one giant Transformer fight. You can’t see who punches whom and how and why. Literally just pick bits and pieces and connect the dots.

With regard to Avengers or affiliated heroes, there is nothing new or worth mentioning in comparison to previous films. Everyone basically plays same characters, maybe with just slight modifications. Out of all horde of actors Benedict Cumberbatch, whose Dr.Strange is way more funnier than his standalone movie. Even though this is more because of the situations he is encountering. Also, Mark Ruffalo had to finally show his acting skills, not just be a guy who doesn’t want to turn into green monster. There is also one really good cameo, I will not spoil.

Josh Brolin play Thanos and despite being all CGI, we can see his craft through masterfully done motion tracking. He is able to show Thanos both as superstrong entity, but also encompass the emotional backstory and still remain believable in all the mess.

Even for a person who is not a Marvel fanboy, “Avengers: Infinity War” is a very enjoyable film. Writers and directors manage to squeeze in incredible number of superheroes into one film and give them more or less adequate screen time. Film has a lot of comedy elements and tries to have fun with weird hero pairings. Pacing is nice, with explosive action sequences and slow emotional moments. Overall, film delivers, and despite a lot of minor flaws and lazy writing, it still remains entertaining all the way till the end.