With one-dimensional characters, heist plan that is based on multiple unlikely events or coincidences, boring dialogues, impotent twist, and as-a-matter-of-fact direction, "Ocean's 8" wastes the talent of a brilliant cast

Somewhere in the beginning Cate Blanchett’s character Lou asks Sandra Bullock’s character Debbie Ocean on why she wants to do the heist. “Because I am good at it,” replies Debbie and that is basically the whole motivation of her character. Not revenge (at least not to full extent), not desperate need of money, not to prove anything, not to take something hers. Nope. Just because she wants to. And this is the only thing that drives the main character.

Because while incarcerated Debbie Ocean had nothing else to do but plan what to steal when she will be out. Some people just don’t learn on their mistakes. And, yes, she got into jail because she got framed. But, we will learn that was mostly her own fault. Regardless, parole committee approves her parole and as soon as Debbie steps out of the jail she cons her way into getting into hotel. Next, she tracks down her old “partner” – Lou. Debbie tells her that during her time in jail all she did was perfecting one single plan for a heist job. They will steal $150 million worth diamond necklace. There is the catch though. This necklace is being held in the vault, fifty feet underground. But Debbie has also devised a plan as to how to get the jewels out of vault. This plan includes crashing the most exclusive party in US – Met Gala. For that she will need a team of highly trained women (because “men attract more attention” apparently). And she will get her 8! 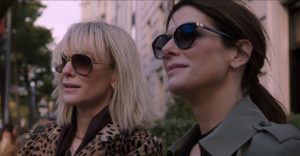 Debbie (Bullock) shows Lou (Blanchett) what she wants to rob

Debbie’s motivation is not the only issue I had with the screenplay. It is a heist movie. So the main plot is the heist itself. It is supposed to be intricate, ballsy, unexpected and unique. It is not. First of all, it is amazingly complicated. If you actually look back and think about it you will probably come up with at least three different much easier plans for the heist that don’t involve even half of effort that team puts. Second, although Debbie claims that during her prison stay she has revised all possible outcomes (just like Dr.Strange in “Avengers: Infinity War“), we will find out that so many things in her plan relied on pure coincidences. And when they don’t, they actually depend on dubiously low probability and high-risk scenarios. These probabilities add up to almost impossible perfect scenario. How good that plan can be?

Third, the way heist movies work is that (just like Jimmy Logan explains in “Logan Lucky“) shit happens. This highly unexpected event triggers our characters to modify plan on fly and puts viewer into state of wonder whether the heist will succeed or no. In “Ocean’s 8” this shit event is so lame, boring and mundane you can’t even call it “shit” really. Maybe just a “fart”. So there is absolutely no tension and no wondering will they/won’t they drama.

Fourth, formula dictates there should be a twist. See, they haven’t shown us anything. There is much bigger picture in all heist movies. So not only the bad guys, but also viewer gets conned. Best examples are same “Logan Lucky” and “Thomas Crown Affair.” So naturally “Ocean’s 8” also has a twist. But you guess it, it was not only stupid, but also illogical and can’t even qualify for a twist. “Oh by the way…” effect. I could have easily lived without that twist. By the way, originally Debbie’s crew consists of 7 people including her. But movie’s name is “Ocean’s 8”. I wonder why…

Gary Ross may have directed “The Hunger Games” and what not, but he is not Steven Soderbergh by any means. Heist movies need to be fast, dynamic and lively. “Ocean’s 8” is neither. There are no fast cuts, no preparation montages, no split screen views. Nothing. It’s like you are watching a Hallmark movie about some heist attempt. There are some laughs here and there, but none of them will make you do anything more than just smile. I also had a problem the way he showed the Gala itself. According to the movie, Met Gala is the most sought event in whole country, with A-list celebrities. All “Ocean’s 8” offers are some random fashion, TV personas and Katie Holmes. Does it make it the biggest party? Such a letdown. 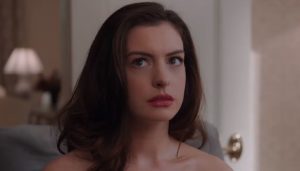 Daphne (Hathaway) doesn’t understand what is going on

“Ocean’s 8” stars an incredible cast including amazing actresses Sandra Bullock, Cate Blanchett, Anne Hathaway, Helena Bonham Carter, Mindy Kaling and (sure, why not?) Rihanna. Still movie manages to waste talents of most of them. Bullock and Blanchett get nothing else to do but just to smile mischievously. I mean seriously, these two have three Oscars between them and God knows how many nominations. Why would you give them such one dimensional characters? Of all the cast members only two are remotely acting – always fascinating Helena Bonham Carter and Anne Hathaway. Hathaway’s performance, by the way, is the only thing worth commending in the whole movie.

One of the worst heist movies of all times, “Ocean’s 8” literally doesn’t even try to be good. Hero who literally has no motivation, one-dimensional characters, heist plan that is based on multiple unlikely events or coincidences, boring dialogues, impotent twist, and as-a-matter-of-fact direction wastes the talents of so many brilliant actresses involved in this project.