In 2013, Steven Soderbergh announced his retirement. In 2016, he decided to come back for a special project. And that project is “Logan Lucky”. If you wonder what kind of film could have made one of the most extraordinary and reserved directors to come back from retirement, ask no more. “Logan Lucky” is a Soderbergh movie to the core, with his distinctive storytelling, visuals and style. As a matter of fact, I can confidently say, this is the best heist movie I have seen in my life.

Deep in West Virginia lives Jimmy Logan. At one point destined to be NFL star, he (per what his brother, Clyde, calls “Logan family curse”) is a broke machine operator in a construction company. Well, for at least first 5 minutes of the film. He is fired due to some bureaucracy. On top of that, Jimmy’s ex-wife announces that she is moving out of state with her husband and is taking away their daughter, Sadie with them. Jimmy is ready to face any kind of problem life throws at him, but losing Sadie is something he can not and will not afford. So he comes up with the plan to rob nothing less than Charlotte Motor Speedway vault. For that he, firstly, needs to convince his brother, Clyde, who was discharged from marines after losing his hand (“Logan family curse”). Second, he has to get into his team the only person who can infiltrate the vault – local safe guru Joe Bang. Problem is Joe Bang is serving time in jail. But, not even “family curse” can stop Jimmy now, can it?

Apparently no one ever heard about screenwriter Rebecca Blunt. Rumor has it she lives in UK. Or that’s actually a pseudonym of Soderbergh’s wife. Or maybe Soderbergh himself. After all he is a person who uses his parent’s names as his aliases as an Editor and Cinematographer roles. He doesn’t want his name to appear several times during credits. Nevertheless, whoever the screenwriter is, that person has written very engaging, unique and captivating screenplay. We have well defined characters, intricate heist plan, running gags and smart laughs, emotional slow parts, moral dilemma. This all is tied together with a fluid script.

Soderbergh is no stranger to heist movies. After all, he is the person who re-invented the whole genre in 2000’s with Ocean’s trilogy. But “Logan Lucky” is complete opposite of “Ocean’s”. There 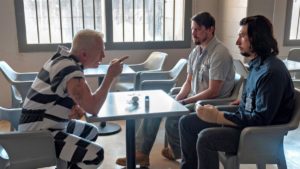 Joe Bang tries to tell Logan brothers he is still in jail.

are no glamorous characters, no state of the art technology trinkets, no hackers, no break-dancing acrobats, no women in distress, no son-of-a-bitch enemy. Instead there are rednecks who can hardly spell their names, homemade explosive device made of gummy bears, refrigerator magnets to break doors and ingenious prison break plot. The best part, you don’t need to even have an enemy after all. You just have to show that every hero’s biggest enemy is no other but hero himself.

And how can I forget about the laughs. Film has a lot of funny moments, but one concerning Game of Thrones and G.R.R. Martin is probably the best one since Red Robin Wedding on South Park.

Soderbergh’s style jumps on you from the first frame. Very wide shots, set as close to the object as it is possible to not induce barrel distortion, with impeccable focus pulling, are magnified with the extremely saturated image. In contrast to his previous works, which use a lot of artificial interior light and bleached effect for dramatic presentation, “Lucky Logan” stands out as probably Soderbergh’s most colorful film. This compliments the relaxed tone of the film even more. The framing is incredible. Overall, I think, when it comes to framing, editing, staging and pacing “Logan Lucky” should be used and analyzed as a textbook material for years to follow. There was not a single element that didn’t fit in this film. Bravo!

What is more surprising is that Soderbergh uses only one actor whom he worked with before. I think maybe because Channing Tatum (who appeared in his “Haywire” and “Magic Mike”) is the 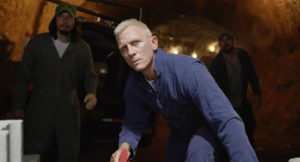 only one of his acting stable who can even remotely give a hillbilly look. And he delivers. He passes very good as a proud redneck, bypassing all stereotypes. Jimmy Logan is simple, but not dumb. Resourceful and not lazy. Caring father and not a bastard. He is probably the most positive country boy character depicted by a Hollywood movie.

What can not be said about “newcomer” Daniel Craig, who plays complete opposite – stereotypical redneck. But how he plays. Not only it is funny to see James Bond with dyed hair, but his Joe

Bang is an epitome of your neighborhood hillbilly. Funny, daring, engaging, with in-your-face personality and no-holds-barred attitude. Rest of the characters are also very meticulously cast. Adam Driver, as Clyde Logan, fits perfectly with his sad eyes and emotional stare. Unlike the role of Kylo Ren in Star Wars: The Last Jedi, he is able to show his acting skills.

Steven Soderbergh manages to take incredible screenplay of “Logan Lucky” and turn it into a fun film, full with action, laughs, heist and even deliver a very good moral resolution to the character. I hope this film will mark a permanent return of the director, who takes his art on a higher level with every single movie he does. Very rare you can see the director achieve this.