Not enough drama, not enough badassery, not enough adventure and not enough plot. Even Ron Howard can't save this weirdly mediocre film.

I have to admit – I am not a “Star Wars” fan. Which might sound extremely weird because I love science fiction, fantasy, space travel, adventure and action. I just don’t find “Star Wars” to be compelling enough to make me a fan. Having an outsider view puts me in unique position to review this movie free of ecstatic fan goggles or devoid of hater bias. However, this will not stop me from saying that “Solo: A Star Wars Story” is a big letdown.

In a galaxy far, far away lived an orphan called Han. He was running scams and cons for local underworld boss Lady Proxima. All he wanted was to escape this god-awful planet with his girlfriend and fellow orphan Qi’ra and become a pilot. His only hopes to achieving this was stealing highly valuable fuel called coaxium. And while his plan doesn’t go as planned, he and Qi’ra manage to evade Lady Proxima’s henchmen and reach imperial shipping yard. But Qi’ra is caught right before they can escape and Han has no choice to abandon her and run away, promising to return for her as soon as he can. As the only chance off the planet he joins imperial flight academy. Three years pass. Han is not a pilot, but he is still trying to make some money to buy his own spaceship to return after Qi’ra. That’s why he doesn’t hesitate a second when opportunity arises to join a gang of smugglers led by Tobias Beckett. 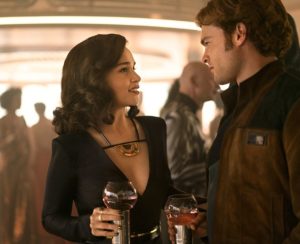 You know nothing, Han Solo (Ehrehreich)

I don’t know where to start with the problems with this film. I understand, taking the most beloved character from “Star Wars” universe and dissect his past is a huge undertaking. Not only because of crazy horde of loyal fans, but because Solo remains the most complicated and multi-dimensional character in whole saga. To me the whole storyline of the original trilogy is not about Luke or Leia, but about Han and his transformation from a criminal to a good guy. And since the start of the original trilogy is basically a logical conclusion of this film, he needs to turn into a bad guy by the end of “Solo: A Star Wars Story.”

And here it all goes to crap with this film. There is not enough of anything. Firstly, Solo in “Solo: A Star Wars Story” and in “Star Wars” are neither physically, nor emotionally alike, by any means. Solo in “Solo: A Star Wars Story” tries to be bad, he says he is bad, but no one believes him. Not even other characters in the film. Saying you are bad is one thing, actually doing those bad things is completely different.

There is not enough drama. Solo dreams about getting to Qi’ra and turns out it doesn’t even matter. He is supposed to save her, that’s all that we hear but he is not really doing anything to achieve that. Towards the end he is facing dilemma that is so mellow, there is no logical explanation how it takes the whole third act. 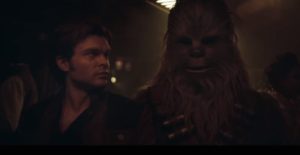 Supporting characters come and go with no specific impact. They are powerful supporting characters. In the average ten minutes of movie time each of them gets, we receive a very rich backstory on them. But why does it matter how you define these characters if they will only disappear from plot and movie forever? For example, there is a weird droid with “droid lives matter” moment that can be totally eliminated from the plot and save us total runtime.

There are not enough laughs. Film is full with some random jokes and one-liners that are supposed to be funny, but you will not find yourself smiling for more than handful of those. There is a weird tendency to try to introduce comedic elements, like Lando’s stupid droid promoting robot equality and such. Solo tries to crack some one-liners to no avail. Sad really.

The bad guys are weak. In the devoted continuation of “The Last Jedi” the badness of the bad guys are heavily mentioned, but their badness is either never shown or is just blatantly bland.

Oh, but there are also twists. Multiple twists. Which are totally ruined by constant foreshadowing. If you literally listen and note everything that is being said in the first 30 minutes of the film, you will know how exactly this all is going to end. And it’s not subtle. Nor they are even good twists. Just some mediocre “Oh I knew it is going to happen, how awesome.”

What film has a lot though is that it tries SO HARD to get sympathy awes by referencing to most beloved things from original trilogy hoping to earn some nostalgia points. How Solo first met Wookie (aww), how he first set his foot to Millenium Falcon (awww), how Solo first sat piloted Millenium Falcon (awwwww). This is so in your face, so fake, no one in the audience actually cared. I remember people cheered and clapped for almost a minute first time we saw Millenium Falcon in “The Force Awakens”. In “Solo: A Star Wars Story” – nothing! “Star Wars” fatigue maybe? 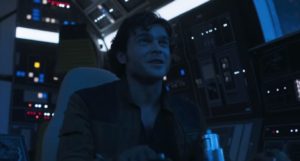 Solo (Ehrenreich) is so happy to steer!

Ron Howard is one of my favorite film directors. Despite him making a lot of cliche films like “Apollo 13” and “Da Vinci Code”, he always brings in his style and charisma to them. His films are always a wonder to watch. They have that extra something that sets them apart. His “Rush” and “In the Heart of the Sea” have incredible character evolution and drama, combined with relentless action scenes.

Such a disappointment and waste of talent. 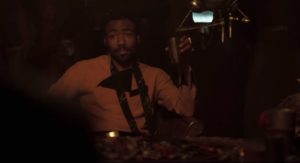 There was a lot of chitchat regarding casting Alden Ehrenreich as a younger version of Harrison Ford. I wanted to give him a chance, but he looks horrible as Han Solo. Not because he has nothing in common with Harrison Ford, but because he looks like One Direction reject than actually a badass intergalactic smuggler. Or rather smiling version of Jon Snow. And pairing him with Emilia Clarke‘s Qi’ra doesn’t help but reinforce that last comparison.

Woody Harrelson right now reached a badass level of acting masterclass akin Christopher Walken with movies like “Three billboards outside Ebbing, Missouri” and “The War for the Planet of the Apes“. No matter what he says or how he acts, there is literally nothing he does bad, wrong, weird or out of place. He is the only good thing in this film. And this is despite the fact that writers constantly tried to take it away from his character.

Donald Glover is another thing that stands out. His Lando Calrissian is charming and the only entertaining thing in the whole film. But, he is introduced too late into the film and is not given enough screen time. Rest of the supporting cast are disposable, unfortunately.

Strip “Solo: A Star Wars Story” from Star Wars connections and film will be just lame action film. Film doesn’t offer anything that will make you enjoy it to full extent. Not enough drama, not enough badassery, not enough adventure and not enough plot. Even Ron Howard can’t save this weirdly mediocre film.