War for the Planet of the Apes

Outstanding performances by Serkis and Harrelson, well-written characters and solid story, elevates this sequel to be the best of the series, but film feels a little slower than how it should have been

Despite being third installment in the new “Planet of the Apes” series “War for the Planet of the Apes” is finally the one to push humans to the background and make them complete villains. We no longer root for them. Humans are a dying race and are in an open conflict with the intelligent apes. It is a fight for survival, not coexistence anymore.

Several years after events of “Dawn of the Planet of the Apes,” Caesar and his fellow intelligent apes are hiding in the forest. They still try to maintain peaceful relationship with humans, but it is getting more and more difficult. There are not many humans around, and most of the humans alive are military groups. One of these military groups finally stumbles upon Caesar’s hideout. They are led by mysterious Colonel, who commandeers his troupes to eradicate as much monkey as they can. His troupes are not all human – there are some apes (who they call donkeys) who are also under his command. They are followers of human-hating Koba, Caesar’s friend whom he killed. Colonel’s men ambush apes, but through heavy losses apes are able to fend off the attack. Caesar releases remaining soldiers alive, trying to send a piece offering. But later that night Colonel himself comes back and kills Caesar’s wife and son. Caesar understands that while Colonel is alive, apes are never going to be safe. So, he sets out to deal with Colonel once and for all. 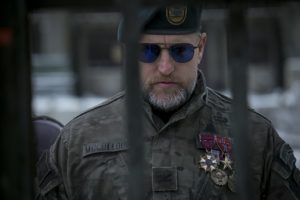 In “War for the Planet of the Apes” Caesar has matured. All he is worried right now is taking his tribe outside the world they are living in. Koba who succumbed to his hatred and betrayed Caesar might be dead, but he is chasing Caesar in his dreams. He is always present, despite Caesar trying to put that behind. He feels personal guilt of letting Koba down. Of letting him become the monster. This internal struggle pushes Caesar to do something he has never done before. And with the progression of the film Caesar not only gets to understand Koba but realize that unfortunately he is not that much different from him.

Main catalyst of that is the plot. The humans around him are getting more and more crazy and apotheosis of that is Colonel. He is everything the Caesar tries not to become. Colonel is brutal, methodical, charismatic, unnerving, primal, and just insane. He is an incredible well-written villain. His 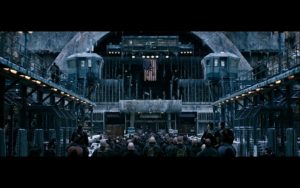 Colonel’s army is ready to greet him

persona is directly taken from Colonel Kurtz from “Apocalypse Now” (just noticed both are colonels, actually). But he is not the character immortalized by Marlon Brando. Our Colonel is somebody that Kurtz was before Captain Willard finds him. He is the version of Kurtz that Willard was reading about in his “dossier”.

In that we know of Colonel’s fate. We know how he will end. He also knows that. His soldiers are following him with NAZI devotion and totally ready to act on his single nod. His motivation to act according to his plan is beyond solid. And when finally, he gets to talk to Caesar, Caesar also totally understands him. To the point that it makes Caesar – the ape who started the revolution, who led his fellow apes through hell, who had to kill many, both enemies and his own friends – scared. Caesar understands he is dealing with someone beyond salvation. And he understands that he needs to escape before it is too late.

Matt Reeves returned from “Dawn” to do “War for the Planet of the Apes”. But this time he had complete independence on the project and he approached film with 100% dedication. He concentrates on Caesar and his struggle to become a leader that apes need so much now. Every shot, every scene is in direct correlation to what is happening to Caesar. Even when showing the other characters, their actions are in direct parallels of what would affect Caesar and his plotline. This dynamic works great, but unfortunately makes film very long and at times very slow.

Furthermore, Reeves achieves to show apes as the only sympathetic creatures and for the first time we want for humans to lose it. It is a tremendous accomplishment on its own, but at the same time alarming. By humanizing Caesar, we basically are pushed to accept humans as a dying race. How dangerous can that be to lose the faith and hope in your own kind and accept the apes as people to take over the World?

Caesar (Serkis) realizes what he needs to do

Andy Serkis reprises his role as Caesar in “War for the Planet of the Apes.” He has aged both physically and mentally. He is no longer that energetic, visionary monkey he was in two previous installments. Serkis takes this version of Caesar on another level. Woody Harrelson plays Colonel and is totally on par with Serkis to create a mesmerizing character. Just like in “Seven Psychopaths”, sometimes I just wonder how much Harrelson acts and how much he is just playing himself. His portrayal makes Colonel a worthy opponent to Caesar and once again reiterates that well-written villain is sometimes what is needed to make the hero great.

“War for the Planet of the Apes” is an amazing example of how project can be if director has maximum control over it. Well-written plot and amazing villain makes this film very intriguing watch. Despite being a sequel, plot involves evolution and development of the character of Caesar, and not just carries same qualities from previous films. Amazing performances by Serkis and Harrelson makes the duo one of the best on screen pairing of last year. Unfortunately, due to the nature of the film, it seems very long and at times way slower than I thought would be appropriate. And, it is the first film that made me completely root against humans.