While having a creepy setting and unnerving storyline, "Veronica" is a mediocre horror film that doesn't offer anything new to the genre

Not sure what it is with Spanish cinema and its obsession with ghost stories, but “Veronica” is the latest addition to this list. Netflix released it last month and immediately people either rated “Veronica” as “the scariest film ever” or “not scary at all”. This probably should warn you immediately. As it should have warned me too. Story is “inspired” by real events of July 1991, when Madrid police received an emergency call to an apartment. Upon turning up, they saw something. Something that they couldn’t understand. It was the first time in history of Madrid Police department that officers mentioned “paranormal events” occurring on the crime scene.

Three days prior to that 15-year-old Veronica wakes up in the morning. Her mother is asleep; she has been putting long hours at the bar to provide for the family, especially since the father of the family has died several years ago. So it is up to Veronica to take care of children – twins Irene and Lucia, and little Antonito. She drops them at the school. It is supposed to be a special day – after all, Solar Eclpise will happen in the afternoon. And while everyone is getting ready to watch Moon’s shadow cover Earth, Veronica and her two friends instead will sneak into the basement of the school to conduct a spiritual seance. Veronica hopes to talk to her father. And while they are not even sure if the Ouija Board will ever work, girls set up candles and sit in the circle in hopes of someone to answer their call. To their surprise someone does answer Veronica. And suddenly she is in danger. 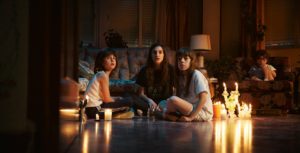 It is very hard to judge writing for a horror film for several reasons. When most of the horror is happening on the visual (jump scares) and auditory levels (eerie music) the writing might look blank. In that essence, the writing will play more in terms of backstory, plot progression and resolution. With that “Veronica” achieves several things. Firstly, the setting is very unnerving, since Veronica is in charge of her smaller siblings. Suddenly, it is not only her who is in grave danger by the supernatural forces. Her mother doesn’t believe (why should she?) mumbling teenager. And despite the protests she has to leave children with Veronica. Film forces us to worry not only for the well being of one girl (who, let’s face it, brought everything on her head), but also the being of three innocent children. Secondly, the plot progression is also well done. Film opens with the police arriving into the action scene. We know how the film ends. And we watch and try to anticipate what will happen.

There all the praise for writing will end. There is literally nothing innovative in using Ouija Board (or some instrument) to gather spirits and then fail miserably. “Veronica” is far from best example of this genre. Also the emotional resolution of the movie feels very weak and pointless. While it leaves some things to interpretation, there is nothing that will make you scratch your head or even feel bad about it. Which is shame, because I was expecting something in the line of similar Spanish horror movies “The Others” by Alejandro Amenabar and “The Orphanage” by J.A. Bayone. 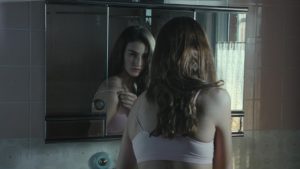 Veronica (Escacena) not sure where the marks came from

There are mandatory jump scares and cheap thrills. Nothing too crazy, thankfully. There are couple slow scary buildups and overall “Veronica” does achieve some leve

l of creepiness and uneasiness. There are some long shots of camera moving in seemingly weird direction, with clear anticipation of that something scary will happen. Overall, directing was not bad for a horror movie, but it doesn’t necessarily stand out. I feel there could have been more done to make the film even scarier. Surprisingly the biggest achievement of director Paco Plaza was a perfect casting of Sandra Escacena as titular Veronica and also young child actors as her siblings. They deliver everything they are asked for.

This film turned out to be a mediocre horror film. While trying to stay in between of jump scares and slow progression, it walks the line very carefully. The overall setting is unnerving, but resolution of the film makes you ask for more.