Despite lecturing tone, Spike Lee is able to deliver a very strong message and turns incredible story of "BlacKkKlansman" into one of the most powerful and important movies dealing with racial issues.

There are several things that sets Spike Lee’s latest “joint” “BlacKkKlansman” apart from similar social movies based on racial problems. First of all, it did actually happen. Second, it’s that despite its lecturing tone film is able to keep you occupied. And lastly, it is directed by Spike Lee.

In 1979 young Ron Stallworth is walking on the sidewalk when he notices a banner informing that Colorado Springs Police Department is looking for applicants, specifically from minorities. And while he knows that wearing big afro on his head and the fact that he will become first African-American to work for local police department will make a lot of people anxious, he still decides to take the risk. But soon he is fed up with bureaucratic work he has been assigned and urges his management to have him do undercover work. He is then reassigned to narcotics division as a detective. But instead Ron gets a brilliant idea – he will call up local Ku Klux Klan chapter, pose as aa racist white man and infiltrate the network. As ridiculous as it sounds, he is able to successfully establish contact. He can’t of course attend the meetings, so his fellow detective Flip Zimmerman will act as a stand in during meetings in person. 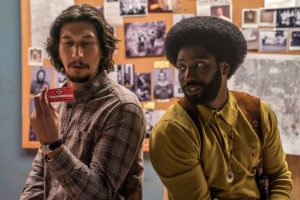 For what it is worth, the fact that this story is not a brain child of Tarantino but is what actually happened elevates “BlacKkKlansman” to next level. I mean how unbelievable it is that black detective can successfully fool Klan into believing he is a white person? And while it is not inconceivable that one might trick a person to anything over the phone, but level of sophistication that went into work of real Ron Stallworth is amazing. Not only he had to pose as a racist, homophobic, anti-Semitic person, he also had to become somebody he totally despises. Big help also arrives from the fact that he got support from his fellow detectives and his bosses. And how about Zimmerman, who had to stick out and pretend to be the fake person that Ron has created in his mind?

That being said film does feel like a lecture, unfortunately. Dialogues constantly use phrases and slogans that are too familiar with modern geopolitical events. There are direct parallels into what Klan members are saying and what modern politicians are pushing for. And these instances are not subtle. They are extremely direct and in-your-face (“Make America, umm… the Greatest” or “America First!”). Lee could have you used intricately sophisticated ways of delivering his message, but instead he goes to jugular and just screams that at you. And while, I am sure, this was his intent, not to have the subtlety, honestly, I felt that he was just preaching. I would have instead preferred to derive to the point myself. 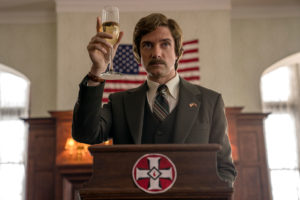 This is especially a big issue for me since “BlacKkKlansman” has a lot of comedy. But unlike other two releases of last month dealing with racial issues, “Sorry to Bother You” and “Blindspotting” it fails to use comedy as a tool to get that message to audience. Then again, “BlacKkKlansman” uses situational comedy more in style of Tarantino than satirical tone of “Sorry to Bother You” or allegorical “Blindspotting”.

However, DESPITE this “BlacKkKlansman” actually does deliver a message. An extremely powerful, intimidating, strong and influential message. Lecture might bore you, but point that Lee wants to get across will get there and will stay there even after you leave the theater and you will understand that despite forty years passing since the events of “BlacKkKlansman”, nothing much has changed. And it surely will scare you.

From the lecture tone to the sheer ridiculousness of the situation, “BlacKkKlansman” could have gone so wrong so fast has it been in the hands of none other than Spike Lee. Instead, Lee offers something that very few directors could have brought to the project – extreme passion for the topic and unique directing craft. From swift camera angles to amazingly well-placed soundtrack, from intricate editing to intricate reveals, from steady pacing and building tension, “BlacKkKlansman” offers a viewing experience only Lee could deliver.

There are several instances where minor characters are delivering a speech/telling a story and the way Spike Lee presents and handles the crowd is just incredible. In first instance, he focuses on the individual faces listening to strong words of encouragement. In the second, he juxtaposes Klan members conducting ceremony on top of witness account of lynching. Both sequences are extremely powerful.

Then there is an ending. Ending and epilogue, actually. Initially I felt that ending was weak, but the way Spike Lee transitions to epilogue ties whole movie up and delivers punch so strong, so raw, so powerful and so profound and you will hear it reverberating the whole movie theater. 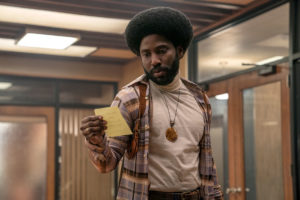 Despite John David Washington delivering strong performance as Ron Stallworth, I actually found him a little bit one-dimensional. Yes, there is a struggle in him to come up with terms of him being a police officer and at the same time having issues with his girlfriend, Patrice (played by Laura Harrier), who is civil rights activists, but I felt that it could have been written better. But that is hardly Washington’s fault. I did like how he portrayed “white” Ron and “black” Ron separately, both equally believable. Instead, Adam Driver‘s Flip Zimmerman offers much compelling glimpse into a Jewish detective, who despite never accepting being Jewish, has to become person who hates his own heritage to infiltrate Ku Klux Klan. This role and his portrayal in “Logan Lucky” makes him so much better than mediocre Kylo Ren in “The Last Jedi“.