With amazing script, incredibly believable performances by Diggs and Casal and masterful directing by Estrada, "Blindspotting" is one of the gems of modern independent cinema and surely is one of the best films of 2018.

Second week in a row there is an independent film in cinemas dealing with racial issues. There are so many things alike between “Blindspotting” and “Sorry to Bother You“. Both films deal with racial profiling, problems of misconceptions and misrepresentations, both are set in Oakland, both premiered at Sundance Film Festival, both done on minimal budget and with first time directors. But similarities end there. “Blindspotting” offers quite different experience.

Collin has been on probation for 11 months and 27 days. Now with only three days left, Collin is counting minutes to become a free man. Free convicted felon, that is, because once a felon, society will always think of you as felon. Even if you try to leave all your past behind. And to be fair, Collin tries his best to stay away from trouble. He knows that any illegal activity, any run-in with police will send him back to jail. For all it takes, he wants to change. But that is nearly damn impossible because Collin’s best friend is ghetto gangster wannabe Miles, who likes instigating fights, smoking weed, buying stolen guns and literally doing EVERYTHING that might land Collin in jail. Collin can manage Miles though, what he can’t manage is something that happens on the end of third day – he witnesses police officer gunning down unarmed African-American young man. And suddenly two days that are left of his probation turn into infinity.

Collin (Diggs) and Miles (Casal) on their day jobs

Daveed Diggs and Rafael Casal wrote the screenplay and star as Collin and Miles, accordingly. Childhood friends in real-life, both spent several years writing and fine-tuning the script. In the end, we have “Blindspotting” – a perfect combination of comedy, drama and tragedy. And script not only literally takes you on roller coaster of emotions but offers something different. While most of independent films concentrate on personal drama of heroes, “Blindspotting” channels global drama into a personal drama for the hero. We have Collin trying his best to behave, but whatever he personally does might not be actually enough. It’s like society itself wants him to fail badly.

Then there is a problem of race. Collin is big muscular African-American with braids. His image automatically instigates people to stay away from him. Convicted felon he is or no, it doesn’t matter. From standpoint of police and society he will always be the bad guy. On the opposite end there is Miles. He is white American who acts more like a person that Collin tries to not be compared to. But Miles is Collin’s best friend from childhood. Despite his explosive character he has always watched Collin’s back and he even visited Collin twice a week while he was in jail. So despite the fact that Collin knows that Miles will most likely have him either thrown to jail or killed, there is nothing he can do about it.

All this drama is intertwined with funny dialogues and freestyle rapping. There are a lot of jokes about Collin trying to stay clean and healthy, in the expense of hipsters, veganism and Whole Foods. Rap specifically plays a very strong role in the film. Collin and Miles entertain themselves freestyling at first opportunity. I did enjoy that at first their rhymes were broken and kinda pointless, but as the film progresses it gets more mature until it culminates in one single amazing sequence.

Good script is only a part of the film. To translate the intricate details and complexity of the plot to the screen you need to have a talented director. Carlos Lopez Estrada directs “Blindspotting” in his big screen debut. He manages to turn the script to equally awesome spectacle. I did enjoy how he made the film about Oakland. The city is the middle of the action. There is a constant musing about what is going on with Oakland, in what direction is it heading. Hipsters and gentrification is one of the side plots of “Blindspotting”. On every corner there are evidences of old city being torn down and new values being established. There is another level of conflict that Miles specifically has with hipsters taking over the “hood”.

But what makes “Blindspotting” work is that despite all these diversions and subplots, film still remains on track. Estrada masterfully builds tension by setting Collin on a collision course with his past, present and future. And you know that whenever the ending crawls in that it will not be pretty. 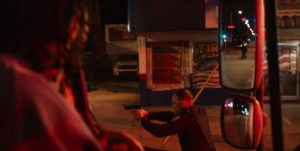 Daveed Diggs kills it as Collins. He is extremely believable in his portrayal. He is a likeable hero. And despite him being a felon we truly believe in that he wants to change. Diggs manages to bring so much dimensionality into the character that viewer has no other choice but to root for him. Yes, everything that happens to him are direct consequences of his actions, but why not give him a second chance, especially if he wants to change and be a better self? Rafael Casal plays complete opposite, extremely one-dimensional Miles. He just wants to be gangster, hustler. But what I did enjoy about his performance is that even though he wanted to be one-dimensional character, “Blindspotting” does its best to change him. And, boy does he fight back!

And same applies to supporting cast. Janina Gavankar plays Collin’s ex-girlfriend who wants to see Collin change. Jasmine Cephas Jones is Miles’ baby mama who wants him to grow up and Ethan Embry plays police officer who shot an innocent man. Their roles are not just a blank space filler. There are there to elevate and truly support the main heroes and they deliver a very good performances.

With amazing script that offsets global drama into a personal one, incredibly believable performances by Diggs and Casal and masterful directing by Estrada, “Blindspotting” is one of the gems of modern independent cinema and surely is one of the best films of 2018.