Visually captivating and well acted "Unsane" is a very sound psychological thriller, but is not able to push the thrill to the limit

I honestly was not predisposed to watch “Unsane”. All because that whole marketing campaign was built on “shot by iPhone” premise. So what? Is it something new? Something never done before? Or something so revolutionary and mind-bending? No, no, and again no. And though smartphone cameras have been pushing technological limits, but so have been numerous professional cameras. Regardless here we have Steven Soderbergh’s latest creation – psychological thriller “Unsane”.

Sawyer Valentini feels like she is getting mad. She has relocated to a new city, found a new house, job. All because she had issues with a man stalking her. Despite moving on, she lives in constant fear for her life. To cope with that she decides to visit a psychiatrist. She talks about insecurities and difficulties she is having and how she feels depressed. When psychiatrist asks her about possible suicidal tendencies, Sawyer confirms that she sometimes has them. When their session completes Sawyer wants to leave, but nursing staff stops her. They tell her to surrender all her possessions and follow her. Sawyer is dumbfounded, but they explain to her that among other things she was signing during “discharge” was an agreement to voluntarily stay in the mental institution. Psychiatrist made a conclusion that she might be danger to herself and others. And now she just can’t leave anymore.

Films of this genre like to play with the viewer. Usually for the entirety of such film we are left clueless. Is our hero really mad? Or is everyone playing the game to make person believe she is mad? Or maybe it’s all some kind of dream? “Unsane” starts just like that and film does toy with the viewers. The uneasiness of the situation being placed into mental institution voluntarily/involuntarily and immediate consequences of that do drag you emotionally down. But instead of keeping this intrigue, film gives it all somewhere right in the middle of second act. 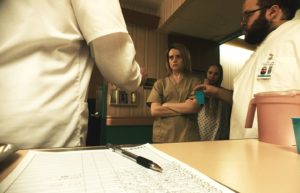 That first section of the film is truly well written. By limiting what is shown and what is said, film manages to create uneasiness and discomfort to viewer. We root for our hero, Sawyer. And this is despite the fact that she truly never shows anything worthy of a hero. Yes, she is apparently good at her job. But she is very rude to her clients and to her co-workers. And she has weird sexual fantasies in regards to her social life. She is manipulative, explosive, controlling and narcissistic. Whole first section of the film I was asking myself that maybe she indeed was just all mad. Or maybe every one was against her. This invoked a lot of sympathy, despite all negative aspects to Sawyer’s personality.

And then film shifts into another territory. No longer we have to worry if Sawyer is sane or “unsane”, film has a clear answer to that. And because there is still half of the film to go, we are no longer guessing what is going on. There is no reason to sit on the edge, at least from “sanity” perspective. Second half of the film instead ventures more into a “survival” territory. And suddenly we get to see more of Sawyer. There is a big shift in her personality. Since there is no pity aspect anymore, film needs to make hero sympathetic and it doesn’t do a good job at it. It just doesn’t feel natural.

Steven Soderbergh is a true master of his craft. You can see exactly why he chose the iPhone. Not because they are awesome, or good way to keep budget down. But to be able to give a true indie look to the film. From first shot this doesn’t feel like Hollywood movie at all. Or any other Soderbergh’s films (“Haywire“, “Logan Lucky“). Weird framing, unnecessary cuts, ultra-wide angles, or ridiculous close-ups. It feels like the film was actually done by a student filmmaker who tries to prove to the World that he is new Tarkovsky. Soderbergh gives us a look that you can see more on the screen of some D-rated independent film festival.

And this is where his genius comes in. The first half of the film, where we are not sure what is going on is full with these shots. Just because indie films like so much to toy with emotions of viewers. And in the second half of the movie, these weird shots are all gone and it feels like Hollywood production again. There is no need for them anymore. Regardless, Soderbergh manages to create and hold tension for the majority of the film. The ending seemed a little rushed and I think could have used a bigger resolution. Not sure what was the reasoning to end the film like that. 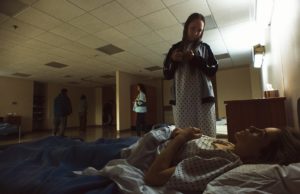 Overall acting was enjoyable. Claire Foy plays our hero, Sawyer Valentini. She is extremely believable in all aspects. She is spot on with emotional roller-coaster her character experiences and we doubt Sawyer’s emotions very little during the film, both in first and second part. Juno Temple and Jay Pharoah play fellow patients. Both of them deliver solid performances. Pharoah plays Nate, the only person who (maybe) believes Sawyer and Temple unstable Violet.

Steven Soderbergh manages to make “Unsane” a very captivating thriller. Film juggles with viewers emotions, but never pushes them to the limit. From one point it is good, instead of having cliche endings and multiple twists, film sorts everything in the middle and leaves us guessing what will happen. On the other hand it reduced the whole engagement and investment into the movie and forced a transformation into main character to make her more sympathetic.