Falsely advertised and presented as a comedy, "Tully" destroys even a tiny bit of feel-good vibe with weird third act and nauseatingly horrible ending, that rendered extremely realistic performance of Charlize Theron futile.

After seeing the trailer for “Tully”, I had very little motivation to see it. Not because I am not familiar with motherly struggles (my wife has given birth to two gorgeous girls), but because it was ACCORDING TO THE TRAILER a feel-good movie about mother who needs a breather in her life after giving birth to third kid. Boy, I was so wrong! It is somewhat like that for 2/3 of the film. But last third is freaking fucked up and I was so pissed leaving theater.

Marlo’s due date is on Monday. She is mother of 8-year-old girl and 4-year-old boy. Third one is apparently an accident but she and her husband, Drew, are ready to welcome new baby to their family. But, maybe Marlo is not so much excited after all. She had postpartum depression after giving birth to second child. And now she is visibly irritated, tired, annoyed, absent, and ready to quit. As a birth present, her loaded brother Craig offers to pay for a “night nanny,” a person who looks after the kid during nights, while parents get all the rest they need. Marlo is hesitant, she doesn’t want a stranger near the baby. But after she gives birth, everything starts falling apart. To the point that one day she realizes that she maybe should accept that help after all. And the help arrives in the face of young, slim, energetic and adorable Tully, who is there to take care of Mommy.

Diablo Cody, writer of Juno, wrote this film. Remember who that is, I will speak a lot about her screenplay, because it’s messed up to the core. So messed up, that I actually don’t have words to describe it. I will do my best: 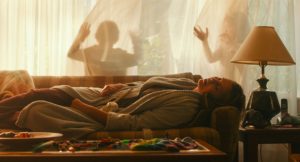 First of all, film is advertised and presented as a comedy. But the comedy is extremely situational and fake. Character of Marlo is basically same quirky, sarcastic and ironic Juno character, but aged 30 years and not getting any smarter. At least Juno was cute and adorable. Marlo is anything but. Comedy in the film arises either from supporting cast telling something borderline irrational to Marlo and her rolling her eyes and/or Marlo replying something sarcastic. It’s like watching a stand-up special. And not the one that everyone wants to see.

Second, just like Juno, Diablo Cody’s script is full with witty remarks and poster taglines. They are delivered so spontaneously and in such a robotic matter, that you can see how the screenwriter and director (it’s his fault here too) basically tries to force feed you the wisdom. Essentially, you can take the whole script and strip it down to 15-20 Confucius-like sayings. 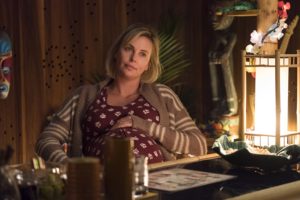 Marlo (Theron) is not sure how she will handle the birth

Third, even if you decide to forego all these limitations and accept the comedy as a face fact (I actually did that just to give film a chance), “Tully” has another surprise for you in the pocket. Last third of the film gets weirder and weirder and culminates in a such freaking ending that made me think what the fuck did I just saw. And retrospectively we realize that “Tully” was never a comedy! Everything that were even remotely funny to that point suddenly become scary and nauseatingly horrible!

Fourth, I hated how the father was portrayed. He is so cliché – it is just mind-blowing! He is accused of coming home late (despite the need to make more money, family is barely making ends meet), he complains about the frozen pizza (roll-eyes), he plays video games at night (oh my God!), he sleeps soundly when she wakes up to feed the baby, etc. Surprisingly, Marlo NEVER during the course of film asked ANYTHING from her husband. I specifically looked for it. Did she ever tell him to go pick up the kid in the middle of the night? Did she tell him to take care of rest of the children? Nope. But that’s his fault, of course.

Jason Reitman teams again with Diablo Cody to do “Tully”. But unlike Juno, this film doesn’t have a feel-good attitude. Maybe because the character of Marlo is not that adorable and cute, or maybe (I really hope this is the case) it’s because of the ending that Reitman didn’t want to risk to make the rest of film so riskily frantic. Regardless, he does more or less good job with framing and interesting montage in the middle, when baby is born. It shows everything there is to know and gets to the point. Marlo is struggling and we follow these struggles extremely close. There are some prophetical dream sequences (which dreams in the movie are not prophetical, you tell me?), but their presence was really dubious. Why include them at all? 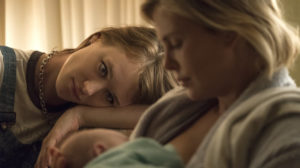 It is good to finally see Charlize Theron in a role that makes her show her full spectrum of acting ability. She is on top of her game and I am happy to see her perform so well after such duds like ridiculous “Atomic Blonde” and plain stupid “Gringo.” This is not Oscar-worthy performance, mind you, but she is extremely believable as a struggling mother. The only thing, she seems very radiant when Tully starts helping her. Very visibly radiant. I will blame that on make-up department. Rest of the cast are uneventful. Mackenzie Davis plays free-spirited Tully, she is cute and energetic and fun – basically everything that Marlo isn’t. She plays well, but she drowns next to Theron. Ron Livingston plays “absent-minded” father of the family. He does his job – he is not there.

Despite advertised as comedy, “Tully” offers very little fun, instead showing actual tragedy and struggles of being a mother. That topped with ridiculously horrible ending make viewer question even the very little laughs that we got through the film. Screenplay is full of fake, witty remarks that the cast delivers them in robotic manner. The characters are barely sympathetic and with the ending even that sympathy goes away. Charlize Theron finally gets a role that lets her shine, but still can’t save this film from totally pissing me off.