Since Quentin Tarantino presented “Pulp Fiction”, the genre of criminal action-comedy become a go-to for all kind of directors. As a result for the most part of the 90’s film industry was saturated by the ripoff product, trying to emulate Tarantino’s witty screenplay and engaging storytelling. Eventually the likes of Guy Ritchie (“Snatch”), Matthew Vaughn (“Kingsman”) and Martin McDonagh (“Seven Psychopaths“) emerged, who not only replicated the achievements of Tarantino, but also elevated the genre by adding their own two cents (each). It has been 24 years since premiere of “Pulp Fiction”, but even today directors are trying to go deliver same replica material. “Gringo” is a 2018 take on this.

Harold has done everything right in his life. He always played by the rules, lived by the rules and hoped to make a name by the rules. Unfortunately not everyone obeys this credo. Mainly his friend and current boss – arrogant, flamboyant (and turns out criminal) Richard and his manipulative, seductive partner (both in business and leisure) Elaine are some of those people. Harold hears rumors that pharma company he works for will be sold and he will be let go. Richard vehemently denies the claims; instead he and Elaine drag Harold to Mexico, where company has a plant at which they produce the new, revolutionary marijuana pill. Unbeknownst to Harold, Richard and Elaine has been secretly selling the drug to local cartel and now want to get out of the deal, so the new buyers can find everything kosher.

In Mexico though, Harold figures out that his firing rumors are true. On top of that he finds out that his wife is having an affair with Richard and is leaving him for good. Feeling betrayed by everyone, Harold decides to fake his own kidnapping demanding insurance money from Richard as ransom. Richard though would, of course, prefer not to pay. What Harold doesn’t know is that there is also a bounty on his head by local cartel boss who thinks Harold is the head of drug plant. And suddenly the whole Mexico, it seems, is after “Gringo”.

If that does sound complicated to you, I have a surprise. It is even worse than that. Multiple parallel storylines with random characters drag the plot down. Seems that writers tried to fill the film with cliche characters, full of weird traits, and try to make us care about them. But we don’t, of course. Why should we? These characters pop in and out with no consequence. Main hero is Harold, but even he is probably on the screen less than secondary characters. His motivation maybe solid, but his actions are far from that and are at times are blatantly dumb. At the same time, the secondary characters are one dimensional and lack originality. Their motivation is even worse. For example Richard. He is head of corporation with shady dealings, who sleeps with his best friends wife and sells drugs to cartel. And suddenly he shows traits of conscience. We are made to believe that he cares about Harold. After all that he has done to him? Why? 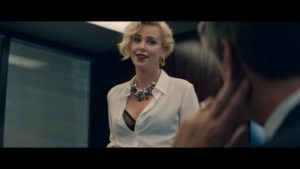 Ex-stunt coordinator Nash Edgerton helms this project. You can feel he tries to deliver a watchable product, but what is more obvious that he fails miserably. There are scenes in the film that are so slow and bear no significance to plot progression. There are left in the film, it seems, because of the whim of the actors. For example, a weird monologue by Elaine in the middle of the film is there to showcase the vulnerability of the character and her wickedness. But why do we even need to see this? Film never answers that. Yes, we know from this start she is lying and manipulative person. Do we need an emphasis on that? Wait a second! Charlize Theron (who plays Elaine) is the producer of the film! That answers it, doesn’t it?

Action scenes at times make no sense. Characters get ambushed out of the blue, with no one noticing the ambush up until the very last millisecond. Cars jump out of the corner with no sound. Plot literally progresses because of four chance meetings. What are the odds of that happening? Ending is plain, with not a single resolution that the film builds up to. 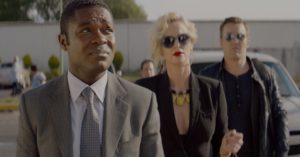 What disappoints me a lot that film packs a very capable cast. Joel Edgerton (brother of the director, surprise!) plays Richard. Unlike “Red Sparrow“, where he plays emotional spy, here he is cold, arrogant, self-confident and annoying. He manages this role perfectly. It might seem that it’s same role as he played in “Great Gatsby”, but you can feel his evolution as the actor. He, at least, tries to add a second dimension to his blah character. Charlize Theron, who is amazing in anything since “Prometheus“, fails in that tho. She plays Elaine – blonde bitch, with bra sticking out of her shirt, trying to show how manipulative, yet vulnerable her character is. Not good.

David Oyelowo is Harold, our titular Gringo. He is the only sympathetic character in the whole film and he delivers. He manages to stay emotional when needed, strong when required and concerned otherwise. Only his performance keeps this film from turning into a farce.

“Gringo” is a horrible, failed attempt to make a criminal action-comedy. Messy plot, unsatisfactory ending, one-dimensional characters, poor writing make this film almost unwatchable by any means. Acting by talented cast tries to bring this film up, but there is only so much you can do with source material.