If anyone would ask me to summarize “Atomic Blonde” I would not reply anything to that person. Not because it is hard, but because this movie is a hybrid of all action films you have seen in last 15 years. This already should warn you, as last 15 years in the action genre has been a steady decline, with only random hits.

Several days after the fall of Berlin wall Loraine, a British spy sits in the interrogation room. Her supervisors from MI6 and CIA are trying to get a debrief. Loraine is badly bruised and is in pretty beat up shape. After some hesitation she tells her story. A week earlier her supervisors summoned her to tell that an MI6 operative has been killed while trying to smuggle a “list” from East Germany. Which, as you can understand, is a list of all operatives and their identities both on British and Soviet side. Her orders are to travel to Berlin and locate the list. Moreover, she needs to find out identity of a double-agent code named “Satchel”. For that she will needs help of another British spy called Percival. Percival though has been so long in the East Berlin that he has already gone “local”. And no wonder that as soon as she lands into Berlin Soviets are waiting for her.

Of all the spy movies I have seen in recent, “Atomic Blonde” stands out as the one with the worst writing. It is so riddled with cliche plotlines and story arcs that it actually made me cringe. In attempt to look smart and spy-ish the film has twist upon twist upon twist. See bad guys are actually good guys, and good guys are bad guys who work for bad guys who are actually good guys, who fight another set of bad guys who are bad guys, but also might be good guys, but they still can’t be good guys, because they are good indeed, but fighting bad guys. Who are good. If you think that I have written bunch of crap, then know that it exactly is exactly like that in the film. It is just pointless and ridiculous. And then after we find the FINAL twist, the whole movie doesn’t make ANY sense. WTF. 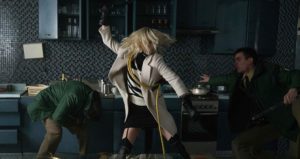 Loraine (Theron) will kick ass in skirt and suspender pantyhose, because why not

Film script is bits and pieces from “Mission: Impossible”, “Mission: Impossible 3”, “Mission: Impossible 4“, “John Wick”, “Skyfall”, “Nikita”, “Children of Men”, “Apocalypse Now”, “Basic Instinct”, “The Bourne Identity”, “Body of Lies”, “Bound”, “Femme Fatale”, and numerous others I can’t remember. Problem is all these movies are actually good ones. Some of them are greatest ever. Unfortunately “Atomic Blonde” fails to copy any good parts from them.

Film is directorial solo debut of David Leitch. He previously co-directed “John Wick” (surprise) and was stunt coordinator on everything from “The Matrix” to “X-Men”. Leitch knows what he is doing. He is all about action and kicking ass and I will give him a proper credit for that. Film does have very well choreographed fights and action sequences. There is one scene a-la “Children of Men” and “John Wick” where the camera follows the fight for good 5 minutes. I am not sure how long they practiced and choreographed that scene. It is so intense and freaking amazing, you just have to see it for yourself. That scene in the whole film is what makes the film at least watchable. Barely, but watchable.

You can give me Charlize Theron kicking and slapping and pushing and destroying people and property and I will just watch that all day long. Especially since she does almost all of it in a very short skirt. Sexualization of her character (just like in “Gringo“) is so ridiculous that even she notes that at one point that “had I known police would show up I would have wore something different for fight”. I am not complaining, I am just saying it is a cheap move. Theron is amazing actress, you can see she trained A LOT for this film. It is just unfair putting emphasis not on her fight skills and acting, but on her gorgeous looks. Just saying.

James McAvoy plays is-he-really-good-or-is-he-not-bad Percival. I love this guys with every new movie he makes. He is completely into the role. But we don’t get to see him much, which makes his character on the sideline. The rest of the cast have big names like John Goodman, Toby Jones and Til Schweiger. Unfortunately they each get like probably 3 minutes of total screen time. Why have this amazing actors play such episodic characters? Such a waste of talent!

“Atomic Blonde” is horribly written, confusing, overly complicated, weird, and irrational film. On the other hand it has Charlize Theron showing her amazing fight skills and elaborately choreographed combat sequences. Watch it on your own risk.