Boring, lazy and pointless, it makes you wonder how it ever made it to the wide release

There are movies that make us think. There are some that make us laugh. That make us wonder, contemplate. Some make us forget who we are, even for a short period of time. Movies that make us sad. Make us cry with joy or cry with sorrow. Some of them keep us on the edge. Others comfort us. One of the characters in “Thoroughbreds” has a mental disorder of not having feelings. And that is what I felt about this film. Nothing.

Amanda’s mother drops her at a mansion. Lily lives there and she will be tutoring Amanda. See, Amanda is in trouble for doing “something” to her horse (at that point we just assume she cut it’s throat off). Amanda sees through Lily’s tries to “help”, she correctly deduces her mom paid Lily. Lily doesn’t want to admit that, afraid of hurting Amanda’s feelings, but Amanda tells her she has no ability to feel. She is a psychopath. Or whatever else her doctor’s call her. Apparently, she has that all her life and she always pretended to express emotions to make others feel good. Or bad/sad/whatever else Amanda can’t feel. Lily is fascinated by Amanda. Maybe if they can be friends Amanda might help her get rid off Lily’s stepdad. After all what are psychopath friends good for anyways?

Cute little girls going bat-shit crazy and planning assassinations and all kind of scheming is not new. Neither is the plot of the movie. Lily thinks her dad needs to go. According to her, he is emotionally abusive and is hurting her and her mother. Mother, of course, doesn’t feel it that way. But, hey, a teenager should know better right? Probably the biggest achievement this film has is to present the facts from perspective of Lily. She is supposed to be a spoiled little princess. She surrounded by lush and luxurious life. Gardeners, servants, housekeepers always around. By definition she is a spoiled princess. But film doesn’t present her like that. She seems normal. But is she?

Otherwise, writing is unimaginative and lazy. Having a psychopath in the movie might sound very interesting, after all we even have a very fun “Seven Psychopaths” full of colorful characters. But is it really a good idea? Amanda just walks around speaking monotonously and expressing no feelings. Lily on the other hand is so weirdly fascinated with her, showing full spectrum of emotions, I kept asking myself – why is that? Why is she so interested in Amanda? There is literally no redeeming quality of having Amanda around. Other than to have somebody to talk to. But even then, it is Amanda who puts ideas into Lily’s head. “Did you think of killing him?” “Huh,” suddenly thinks Lily, “Maybe I should kill him”. And then jump to “I definitely need to kill him” and all the way to “We must kill him no matter what!” Seriously, movie? What is going on?

“Thoroughbreds” is boring. So boring that I kept looking at my watch. Like every five minutes. I also noticed that you can skip one full scene without interrupting the whole flow of the film. So go ahead, you can do a bathroom break, if you need to. It is not worth holding it in. You will not miss anything. Long shots. Empty frames. Weird music (oh yeah, can’t live without weird music nowadays). Then the film is broken into chapters. Not sure what director was trying to achieve by this. Copying Tarantino? Chapters should be dividing storylines into distinctive parts, but here you have one linear story and “Chapter XX” appearing just because director thought it is cute. I can not find a single thing to commend for directing of newcomer Cory Finley. 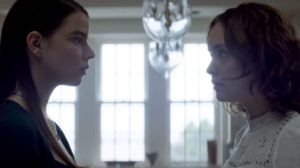 Anya Tayloy-Joy is a wonder. She is the only reason I kept watching this film. She is full of emotions, her eyes are burning with fascination of Amanda’s condition. Unlike Amanda she literally shows the full spectrum of emotions. I see a very bright future in her, especially after her incredible performance in “Split“. Complete opposite of her is Olivia Cooke as Amanda, who just has one single facial expression through the whole film. Supporting cast is not even worth mentioning. There are there to fill the gaps. Not gaps of storyline, but gaps of screen time. You have to get your 90 minutes from somewhere, don’t you now?

This movie is as indie as it can be. It premiered in Sundance, which is surprising, because (1) Sundance has become more and more pop, (2) even the worst Sundance films are actually worth watching (and “Thoroughbreds” is not), (3) Sundance is usually about an idea, spirit, and here those are not even remotely present. How this movie is even released in theaters, I wonder. When you have “Annihilation” being destroyed by the studio that made it for being “uncool and not having positive ending” to see a movie like “Thoroughbreds” receive a full release is a big insult for a common sense. I wish I watched Oprah in “A Wrinkle of Time” instead.