With cliche script and the fact that no one will remember Jason Statham trying to kill monster shark in next couple of years, "The Meg" actually offers an enjoyable watching experience.

Let’s get it straight, you will forget “The Meg” almost immediately after you have seen it. Not because it is that bad, quite contrary it is pretty fun to watch. But because it will age horribly. CGI that looks impressive by today’s standards, will look bleak and murky within next couple of years and subject matter of unusually big animal coming to life and terrorizing people will always produce several new additions each year. Considering there most likely won’t be any sequels (financial reasons) this film will disappear from screens without even leaving a trace.

Billionaire Jack Morris arrives to groundbreaking research facility he paid for to meet scientist Dr. Minway Zhang. Morris has arrived right in the midst of lab’s biggest mission. Crew is diving into deepest section of Marianas trench to prove the theory that cloud of gases is masking real ocean floor. To everyone’s amusement that turns out to be true. But celebrations are short. Research vessel is almost immediately attacked by a gigantic creature. Damages of vessel prohibits it from raising and on surface everyone is scrambling for rescue operations. But there is only one person who can attempt such a daring act: ex-rescue diver Jonas Taylor. Despite his objections, Jonas is forced to join the mission when he learns that his ex-wife is one of the members of stranded crew. But his biggest fears will turn to be right when they will discover that the mystery creature is a megalodon!

Yes, they are trying to kill a giant shark with little cage…

There is literally nothing unique about the script of “The Meg”. It is riddled with cliché storylines, plot elements, character drivers and motivations, resolutions and outcome. From hero who no one believes to and his ex-wife being one of the victims, to main female hero in desperate need of a man in her life and father who never trusted his daughter. List is so big I can just spend whole night writing about it. In fact, the scrip it so unimaginative that characters themselves start making fun of sheer stupidity of some of the points. This self-irony somewhat saves the day, giving audience something to laugh at. That being said, film is not on the “Snake on the Plane” level of ridiculousness, so that’s somehow saves it.

Jonas (Statham) is expertly sizing up new opponent – a megalodon!

And what gives “The Meg” somehow good rap is directorial work of Jon Turtletaub. To my big relief, he didn’t make movie as a freaking big monster disaster movie (though the ending might seem like that), but as a horror/thriller. To that extent, “The Meg” tried to give more of “Jurassic Park” feeling than “Godzilla”. Side note – horror/thriller is a bit of a stretch, as a film is plagued by a financial decision to keep it PG-13 rated. Thus, violence is muted, however it was still pretty wild in some instances.

That pays off well. He uses subtle tension moments, combining with sudden jump scares and timely reveals. In that Turtletaub makes film at least enjoyable to watch. To the point that you might momentarily forget the shortcomings of the script. “The Meg” probably achieves same results as Dwayne Johnson’s “Rampage“. In both films, you just manage to shut down all logic and reason and just enjoy the spectacle. 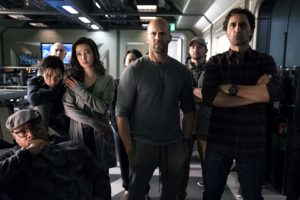 Über-diverse cast of “The Meg” did actually surprise me. In fact, the only minority groups not represented were Hispanics and Arabs. Not because it is inconceivable to have so much diversity in a group of people, but the fact there was so much variation of nationality, race, age, sexual orientation, hair style, hell, even tattoo choices that it was quiet shocking. Not two members of characters carried same trait. And this diversity was so in your face, combined with stereotypical traits for each character, me, biggest proponent of realistic representation of diversity, was just appalled by how much “The Meg” overdid it.

However, I have to admit, cast did more than adequate job. Jason Statham as Jonas Taylor is very effective both as grumpy savior and funny romantic. Li Bingbing, though written cliché, proves she can stand her own ground. I did enjoy also Rainn Wilson‘s performance, who very nicely plays moneybag with ulterior motives.

“The Meg” may have a horribly cliché script, but combined with Turtletaub’s direction it actually turns out to be fun to watch. And while Jason Statham trying to kill monster shark will not go into history as a memorable film, at least it is enjoyable. Until next killer shark film arrives.