For a film that is about giant gorilla fighting giant wolf and giant crocodile, "Rampage" is actually not bad at all, with stunning action sequences and visuals, but has just horrible character development and cliche villains.

What exactly would you expect from a movie that sets a giant mutant gorilla to fight giant mutant wolf and giant mutant alligator, while destroying downtown Chicago? Technically nothing even remotely good. But throw in The Rock, add modern CGI and include some emotional backstory and you get “Rampage,” movie that is not as bad as it should actually be.

Energyne is conducting experiment on genetic serum called Rampage. So volatile is the compound that it is being tested in open space. However, one of the “test subjects” destroys the space station and capsules with Rampage gas crash on Earth. In Wyoming a wolf stumbles upon the capsule. In Florida an alligator thinks it’s a prey. Last capsule is recovered by curious albino gorilla George. He is living in a wildlife sanctuary under supervision of primatologist Davis Okoye. Davis is ex-military, who turned his life becoming anti-poacher. He has saved George when he was just a baby and he is very close to him. That is why he is extremely shocked to find out next day that George has substantially grown up in size and is showing uncharacteristic animal traits. Just as he is trying to figure it out, Dr. Caldwell shows up announcing that she has originally designed the DNA altering serum that George has inhaled and that it will only make George bigger, stronger and faster.

As ridiculous the story sounds, writers did a good job exploring the backstory of George and relationship with his pal Davis. They are using sign language to communicate. George is playful and has weird sense of humor, we find out. This makes him very human-like. In our eyes he is no longer just an animal. He has a personality and charisma. When he starts transforming we see and we feel his pain. Davis reacts emotionally to his changes. He is worried about him, he truly wants to help his friend. All these adds an extra layer to the film that most monster films lack. We are invested to see what is going on and what will happen with the George and Davis.

Rest, however, is full of crap, to say the least. Cartoonish villains don’t add anything to the plot. Their logic, actions and overall design is horrible and makes little sense. I liked the bad guy, head of Energyne, Claire Wyden. She is strong and determined. Her brother, though, is freaking clumsy and plain stupid. I don’t know why he is in the film to begin with. To be a comic relief? Supporting characters are genetic engineer Dr. Caldwell and cowboy government agent tasked with “cleaning the mess”, Harvey Russell. I have to give it to writers, they stayed away from obvious cliche of turning Caldwell into romantic interest. There is some sparks flying between her and Davis, but for the sake of our rationale it is all kept to minimum. Cowboy Russell is fun to watch, but he was either underutilized or overutilized. Can’t figure it out which. And of course, there is a general who wrongfully believes the rockets can kill the beasts. 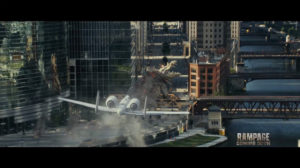 Guess if that plane will destroy the giant alligator

Director Brad Peyton actually did an amazing job. Taking into consideration the mess that the plot is, he is able to keep the film on tracks. I enjoyed the pacing. Right from the start we dive into the action and it keeps going all the way till the end. He totally nails the job of keeping this movie from becoming another Transformer installment. High adrenaline clashes of beasts, city destruction sequences, military getting their ass kicked – all this surprisingly enough doesn’t bore you at all.

Another good thing I noticed, director doesn’t shy away from showing how people are affected by all the destruction. After all, the fight happens in the city. When other films would like to minimize the damage to civilians (see Avengers, Man of Steel, Pacific Rim, etc.) film directly shows people being killed or injured. This also adds another emotional sub-context into how bad the bad guys are and increases the effect of city destruction in our minds. I mean who cares if the buildings are being destroyed? But you see people in this buildings and you go “oh crap! are these guys gonna die?!”

Of course, director couldn’t solve much. Tone of the film is darker than you would imagine. Even Pacific Rim has a lighter approach with multiple comic reliefs and jokes. “Rampage” doesn’t have it. I mean how could it with all the damage and people dying? Which again pushes it towards god-awful Transformers territory. 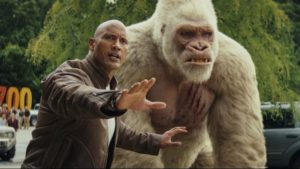 No doubt Dwayne Johnson is an amazing action start, but I have dual feeling about his casting in “Rampage”. From one side he shows amazing emotional skills and plays very well. We see how much he cares about George and how he aches for his pain. His Davis is highly motivated by social injustice towards animals. At the same time, don’t expect any ass kicking or funny one-liners from Johnson. There are literally two people he punches in the whole film. Goes completely against his physical built. Most of the time he is just chasing George or trying to convince government officials not to bomb Chicago or shooting grenades into giant alligator. I am just saying, he could have been easily replaced with some nerdy looking actor, which I assume how vast majority of primatologists are.

Naomie Harris plays Dr. Caldwell, but she has nothing much to do than to deliver information to other characters and us. She has a backstory of working for Energyne and getting fired after realizing malicious intents of the company. Her character is never fully explored. Jeffrey Dean Morgan plays Agent Russell, a cowboy who admits he is an asshole, but nevertheless is the only person who helps Davis. He is hilarious in his role, he totally fits in. His completely don’t-give-a-f$%# attitude goes into contrast with totally serious Davis. Unfortunately, as I mentioned, it’s either too less of him or too much. Movie, decide! Malin Akerman plays a total bitch of a villain. She is good, I enjoyed her, but film again doesn’t give any complexity to the character and keeps her very cliche.

For a movie that is supposed to be total trash, “Rampage” offers actually way more than can be expected. Relentless action sequences, annihilation of city landscape, CGI character design and addition of emotional storyline makes film not a bore to watch. However, poorly developed supporting characters and stupid cliche villains drag this film down. In the end, it still is better than any Transformer movie, but worse than any Pacific Rim installment.