Sicario: Day of the Soldado

While having well executed action scenes, film misses the magic of the first one with scattered plot, slow pace and by concentrating narrative on the two operatives.

First “Sicario” was directed by Denis Villeneuve. His intricate artistic touch made the film stand out from millions of similar action films. With incredible cinematography by Roger Deakins, film was romantic, poetic and harmonious. If you would think of “Sicario” as a symphony, then in comparison “Sicario: Day of the Soldado” is a heavy metal song.

Drug trafficking is no longer a main source of income for Mexican cartels. People are. Indeed, you don’t need to cultivate, process or worry that you will lose your product during treacherous transport over the border. People are easier to handle, there is no shortage in demand to cross the border and importantly all money is upfront. But when border patrol confronts the group of illegals one of them turns out to be a Middle-Eastern terrorist, who blows himself up. Several days later four men walk into the store in Kansas City and detonate bombs. Government comes to conclusion that they have been smuggled to US through Mexican cartels and that essentially brancs cartels as terrorist organizations. But they have solution for that – they shall instigate a cartel war to wipe out everyone. And government orders CIA operative Matt Graver to fulfill this task. He in return turns to the best hit man in the world – mysterious ex-attorney Alejandro Gillick. 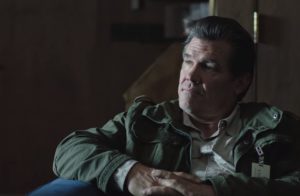 Graver (Brolin) is definitely man for this job

Author of first film, Taylor Sheridan returns to write “Sicario: Day of the Soldado”. However, this time he can’t really make it shine. The reason first film worked so well was how the narration was presented. Main hero was unassuming FBI agent Kate. She was dragged into an operation under false pretenses and was kept dark for the majority of film. In a way, viewers were Kate. We learned everything in the same time as Kate did. And that created a big tension, uneasiness about what is happening. We were surprised when she was, we were angry when she was angry. And also keeping narrative around Kate helped with multiple twists and turns along the film.

But not as much in “Sicario: Day of the Soldado”. Here the narrative centers around characters of Matt and Alejandro. Film devotes first thirty minutes on day to day operations of CIA operative and frankly loses all the charm of first film right then. When in the first film both Matt and Alejandro (especially Alejandro) were mysterious creatures with seemingly own agenda, in “Sicario: Day of the Soldado” it is no longer so. By putting them into spotlight, we lose that magic of anticipation and wonder. And frankly, without that it feels like just a day of life of your neighborhood CIA operative that you have seen a million of times in such hits like “Mission: Impossible“, “True Lies”, hell even “Burn Notice” (which coincidentally stars Jeffrey Donovan, who plays another CIA operative in “Sicario: Day of the Soldado”).

Then there is a plot. Film bounces back and forth between different scenarios and scenes that don’t fit that well with each other. Without spoiling much, in the beginning there is a terrorism subplot. This (somehow) turns into a hostage subplot which turns to cartel subplot which turns into something completely different. Don’t get me wrong, it is interesting to watch, but looking back at the whole film, it just doesn’t make that much sense. 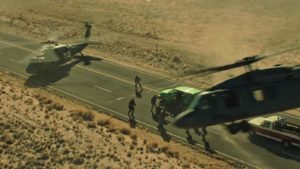 What Villeneuve also managed to give with “Sicario” was immense amount of tension. Yes, film also had brainless action sequences, but they were preceded by extremely intense and slow build ups. This, in turn, magnified the effect of said action scenes. Just think about the whole Juarez sequence in the first film. When we just follow a car full of operatives across the border, into the city and back to border and the whole ambush scene afterwards. How masterful was it! The whole movie lived on this fine balancing act.

Director of “Sicario: Day of the Soldado”, Stefano Sollima does try to give the same effect. And while he succeeds in some places, there are scenes he fails. The slow moments are immensely slow and there is no bite to the tension he offers. For example, the scene with sign language was compulsory for the plot and nicely done, but overall was so long it actually dragged the whole pace of the film down. Or the scenes with teenage smuggler.

To give credit where it is due, action scenes were extremely well choreographed and filmed. The scene with helicopters was intense and very well done. Also, every time Alejandro picks up a gun you won’t be able to turn your head, even though in most cases he will just unload that gun in a matter of seconds. 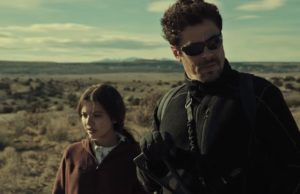 Since Matt and Alejandro are in the spotlight, screenplay makes them much bigger and more dimensional than first film. It is first time we see Josh Brolin as Matt Graver to give any emotions rather than smart smirk. This works very well, as Brolin has a natural stone face. We can see his emotional struggle under the weight of the circumstances and we can feel his pain even though he tries to hide it as much as he can. Overall Josh Brolin fits much better as this character than Cable or Thanos. Benicio Del Toro tries to stay as enigmatic and mysterious as in first film, but he can’t hide that. He also has to show his emotions. That especially shows up in the bus sequence. 16-year-old Isabela Moner plays drug cartel leader’s daughter and I actually was surprised by the depth this young actress has showed. Rest of the cast didn’t offer anything much and were just compulsory characters coming in and out of narrative.

While film does give us interesting characters Matt and Alejandro back, it misses some key points that made the first film stand out. Centering the narrative on them diminishes the intensity and mystery surrounding these characters. While film had very well executed action sequences, the slow moments between them dragged and almost killed the pace. In simple words, if “Sicario” was “Casino Royale,” then “Sicario: Day of the Soldado” is “Quantum of Solace”.