"Uprising" will not disappoint the fans of first film, but won't offer anything new. Loud, funny and full of robots and monsters destroying each other

When Hollywood totally concentrates on reuse and recycle mentality for the movie plots, how do you make a sequel stand out? Two ways really, you either introduce something new (“Jumanji: Welcome to The Jungle“, for example) or you take first movie and put it on steroids. “Pacific Rim Uprising” belongs to latter. Naturally, I highly regard originality. But before you even start judging “steroid” sequels, think about some fine examples – “Terminator 2”, “Star Wars: Empire Strikes Back”, “Blade 2”, “The Dark Knight”, “Toy Story 2”, etc. And while “Pacific Rim Uprising” is not even close to those awesome films it is a very well made “steroid” sequel to Guillermo Del Toro‘s “Pacific Rim.”

10 years passed since the heroic actions of Marshal Stacker Pentecost closed the Breach between the worlds. And since the war is over, his son, Jake, lives a careless and illegal life ravaging old kaiju and jaeger parts and selling them on the black market. While trying to find a highly priced capacitor he runs into young girl, Amara, who steals it before Jake can. Jake is surprised to see she is using it to build her own mini-jaeger. Right at that moment they get arrested. Defense Corps are interested in Amara’s talents and put her into jaeger pilot training program. Jake is given an ultimatum. Either to enlist back as a jaeger trainer (position he apparently abandoned years ago) or go to jail.

Even though he has to endure the presence of his ex-friend Nate, Jake figures it is better than going to jail. He returns to base. Coincidentally they both are summoned to be present on the latest Defense Corps conference where his adopted sister Mako will be makin a speech on drone program. Just as the conference is about to begin though a rogue jaeger appears out of the nowhere and starts shooting at them. Jake and Nate have to set their differences aside and drift together one more time to save the World.

Jaeger about to whip Kaiju

The magic of the first film lied deeply in the writing. Although all the characters were cliche, they each had an extra dimension to them. There was a lot of backstory to their personalities and by the end of the film we were able to connect to all of them and feel their emotions. There was also very well written details that dwelt into kaiju world, human interactions, science fiction. These minor details elevated the film from “robots punching monsters” to an acceptable level. “Pacific Rim Uprising” doesn’t have that, unfortunately. And it is all despite the fact that all the main cast is new, the world is changed, there is new technology available, etc. There is supposed to be backstory for all these, but we never get it.

For me, I wanted to find out more about supporting characters. Film defines (very partially) only Jake and (in one weird flashback) Amara. But think about the sequence of Mako walking with shoe in her hand in the original movie. How emotional and strong that one single sequence was. Del Toro managed in 5 minutes give us more emotions and understanding than the whole 111 minutes of the sequel. And to emphasize how big that scene was – it is the only scene that my wife (who hated the first film, by the way) remembers at all. “Oh that film with the girl and her shoe?”. Yeap, that’s the one, honey.

Then again, people didn’t come to see emotions. They came to see robots punch monsters and monsters tear robots apart. All this movie has to do is be better than “Transformers”. In that perspective film achieves more than it signs up for. There are numerous laughs, including Jake and Amara, Jake and Nate and pretty much everything Charlie Day’s character says. For what it’s worth, I have to give credit to screenwriters to avoiding one single cliche – there is almost no romantic plotline involved. The first film did it masterfully, instead of making heroes fall in love with each other, it made them complete one another. And so does “Pacific Rim Uprising.”

“Pacific Rim Uprising” is another example of how a first-time director can deliver a good product. Steven DeKnight (known as creator of TV show “Spartacus”) does a very decent job with this caliber of a movie. Not only he does a coherent sequel to Del Toro’s film, he also does it in his own style. Neon-light and rain induced fight sequences of the first film are replaced with bright and sunny versions, and in my opinion it works better. I enjoyed Del Toro’s choice of setting, it gave more artsy look to it, but to be honest it was at times incoherent and too dark. By bringing the robots and monsters to sunlight DeKnight manages to give us a new perspective. No longer you have to guess who punched whom and what kind of damage is done.

Another thing that DeKnight does well is he uses almost the same level of practical effects. Yes, you are watching giant robots and monster destroy cities and mountains and military bases. We don’t need to be reminded how much CGI goes in there. But the actors are also put into practical sets as much as possible with as little green screen as needed. This gives it way more authenticity. Action sequences are enjoyable. DeKnight uses several strategical slow motion shots, which also compliment the visuals. Overall flow of the film is lighter and it also reflects in the amount of comedy elements. 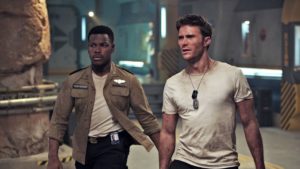 Jake (Boyega) and Nate (Eastwood) rushing for the mission

Movie gives our main hero played by John Boyega everything that “Star Wars: The Last Jedi” didn’t. And though he is still same kid from “Attack the Block“, you can see his evolution as an actor. He is complete opposite of self-righteous Raleigh in the first film and it is very fun to watch him. He plays cocky, arrogant, sarcastic and self-centered character who deep inside knows what is expected of him, but always fights against it. I was pleasantly surprised how he could deliver funny one-liners and jokes with a straight face. Scott Eastwood plays Nate, his friend from old times, and he is basically reincarnation of Raleigh. And while he is also good, he can’t deliver that sincere I-am-struggling-under-the-weight-of-the-World look that Charlie Hunnam did in the first film. Nevertheless their pair are fun to watch on screen together.

Same goes with Boyega and newcomer Cailee Spaeny, who plays young Amara. I loved how she plays a little sister to Boyega’s character and also their interaction with each other. Charlie Day and Burn Gorman reprise their roles from the first film. Despite Boyega’s amazing performance they both steal the show. Their characters are made quirkier and weirder and actors totally embrace it. Literally everything Charlie Day says will make you laugh. Every time Gorman shows up on the screen you go “Wait, didn’t this guy play murderer in Game of Thrones and mafioso in Dark Knight Rises?!”

“Pacific Rim Uprising” is a well made “steroid” sequel. If you enjoyed first film you will not be disappointed. Conversely, if the first film didn’t strike you well “Pacific Rim Uprising” doesn’t offer anything more than that. It is a well made film for people who can appreciate occasional CGI robot vs monster fight. And even then this film lacks charm and magic of the first one.