Film continues tradition of previous films, giving viewers wall to wall action and endless fight sequences, all while maintaining an interesting plot and expanding on the previously established rules of the world that heroes live in.

There is something peculiar in the whole John Wick series that makes it so interesting and compelling to watch. Be it emotional context of character motivation or impeccably choreographed action sequences or tremendously developed world-building that sucks you in – whatever the reason the series is still kicking strong. Proof of that is new chapter appropriately called “Parabellum”.

John Wick has one hour before his “excommunicado” verdict kicks in. In exactly 60 minutes the bounty on his head will attract every single member of crime family and will make him a living target. Wick knows how difficult his task to survive has become. So, he rushes across town to his old “friends” hoping they will fulfill their duties and provide him safe passage overseas. But his path is riddled with people who want to collect bounty and so Wick has to do the thing he is best at – hunt. Meanwhile, two people who helped him in Chapter 2 – Winston and Bowery King meet a mysterious figure The Adjudicator. She informs them that since they have helped John Wick they have seven days to vacate their posts or face the wrath of High Table.

On one side, there is very easy task for screenwriters of “John Wick: Chapter 3 – Parabellum”. Just put the character of Keanu Reeves into a corner where he has to fight his way out. Then repeat that over and over until “The End”. Nothing fancy, right? Wrong. In the best tradition of previous films, “John Wick: Chapter 3 – Parabellum” doesn’t take an easy route. Yes, essentially Keanu does fight his way out of corners through the film, but setup for each skirmish is different. Interwoven with intricate details on previously established glamorous world of underbelly of society, film takes it one step further. We find out (if only briefly) the history of John Wick, who he was and who he became. What exactly drives him and why he actually wants to stay alive, despite losing everything and being on edge of mental and physical breakdown. 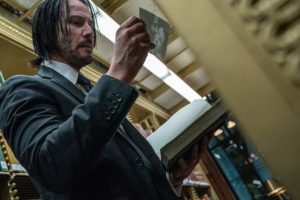 We are introduced with new locales and new supporting cast. He travels across the sea to find the only person who owes him and would be ready to face consequences of helping him. In this kind of film, new characters usually go in and out, because the main star is John Wick. They do the same in “John Wick: Chapter 3 – Parabellum”, but how they go out is completely different story. And every single supporting character has a backstory, motivation, story arc and a appropriate exit. Yes, we are here to watch Keanu kick ass, but also why not see others do the same?

Where screenwriters specifically excel is in having a coherent story that takes John Wick from point A to point B, while maintaining the overall logic and not drowning in the absurdity of what is happening. I mean how else can you explain that I can ignore the fact that according to film there is apparently more assassins on the streets of New York than tourists? Or that John Wick is able to ride a bike, while fighting with horde of other bikers. Or that he can sustain multiple deadly injuries without collapsing into agony. This all happens because film manages to put us into such a deep trance of storytelling that we are ready to forget and forgive all this glaring details and just enjoy the action instead. 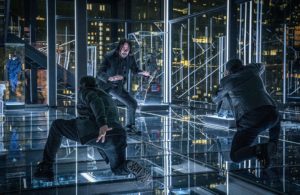 And action we have! Chad Stahelski returns as a director, but again this time without David Leitch. Stahelski has John Wick fight anything the he can lay his hands on. Everything is deadly in his hands – guns, knives, swords, axes, bike helmets, even horses and dogs. You might think you have seen it all, but Stahelski still manages to surprise us with more elaborate choreography, crazier opponents and wilder kills. And he does that all while maintaining the intricate plot and keeping viewer totally invested into the film. And while “John Wick: Chapter 3 – Parabellum” is not as emotionally heavy as previous films, it instead embraces the fun aspect of it.

It is fun maybe because of multiple homages to different movies that “John Wick: Chapter 3 – Parabellum” provides. In one scene, John assembles a revolver, just like Tuco in Sergio Leone’s “The Good, the Bad and The Ugly”. In other sequence, John has to fight with swords and background music is extremely similar to Quentin Tarantino’s “Kill Bill”. How about the scene where John has to fight an assassin played by NBA player Boban Marjanovic? Isn’t that direct reference to famous Bruce Lee fight with Kareem Abdul-Jabbar? By using all this small details, Stahelski basically assembles a very solid action film. 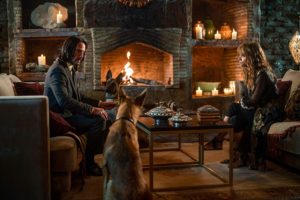 That Keanu Reeves was born for this role leaves absolutely no doubt. If someone didn’t believe that in previous films, in “John Wick: Chapter 3 – Parabellum” that is beyond obvious. He is a very talented actor that has shined in hundreds other roles, but in John Wick he finds his true self. With Nicolas Cage-like dedication he delivers such out-of-this-world performance, that for a long amount of time you just continue seeing him exactly as John Wick and not as an actor who plays the role.

Supporting cast includes already established characters played by Ian McShane, Lance Reddick and Laurence Fishburne. I did enjoy new additions, even though Halle Berry was surely included only to up star level of the film. But even her character doesn’t appear too superfluous and she has her fair share of action. It was also very nice to see Mark Dacascos again on big screen. My only complaint was about the character Adjudicator played by Asia Kate Dillon, who was supposed to be all business and no fun, but somehow felt too fake.

“John Wick: Chapter 3 – Parabellum” continues tradition of previous films, giving viewers wall to wall action and endless fight sequences, all while maintaining very interesting plot and expanding on the previously established rules of the world that heroes live in.