Full of tension, plot twists and amazing performance by Jennifer Lawrence, this film can bore you with a long runtime and very little action

Spy film genre always interested me, but for the wrong reasons. It is not the action or drama or thrill or (sometimes) comedy. I am just wondering what people see in them. James Bond series spans 56 years now, 24 films and counting. Bourne got rebooted twice. Ethan Hawk continues to survive his life-threatening injuries in Mission Impossible. And these are only the successful series. I am not even talking about the myriads of great and not-so-much spy films that are being made every year. With that in mind, “Red Sparrow” gives no answer to my question.

Dominika (really?) Egorova is a prima ballerina. At nights she dances on the stage of Bolshoi Theater. During day she takes care of her sick mother. She is a hardworking girl, who worked her way up from zero. Especially, since she didn’t even use the help of her elusive uncle Ivan Egorov, who works for Russian Intelligence (some weird agency name here, let’s assume something post-KGB). But when she suffers an injury that ends her career, she has nowhere to go, but her uncle, Ivan. He offers Dominika money, of course. But in return he wants her to “seduce” Russian politician. Dominika has a choice and despite it being against her moral values, she decides to go with it. Unfortunately, this mission goes awry and she is left with another choice – she can either die or she can join secret spy program. A spy program that develops “sparrows” – spies specifically trained in psychological manipulation and seduction. And Dominika makes her choice.

In the meantime, CIA operative Nate Nash fails his mission in Moscow. This failure leads Ivan Egorov and his bosses to conclude that there is a mole inside their organisation. And what a better way to find out the identity of the mole, but to send a “sparrow” to seduce Nate?

Red Sparrow is based on the novel by the same name, written by ex-CIA operative. The practice of using prostitute-spies is not new, by any means. It is not exclusive to KGB, CIA or any other spy organization. I think this professions was created next morning after prostitution was invented in general. What a better way to gain information from a person, but through his bed? The whole mission of “sparrows” is to get close to the target, figure out what the target needs and provide that need. Everybody has a need, it is a matter of figuring out what it is. 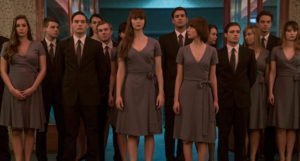 Dominika and her fellow “sparrows” ready for graduation

Film gets into the head of Dominika. She is forced to forego her moral and ethical values, all for the sake of show-off patriotism. “Use whatever means necessary, follow any lead and sacrifice all!” is what she is told over and over in her “breafings”. Dominika is conflicted. She doesn’t want to do it. She feels the rope that is holding her and wants to break the rope around here, because she knows that this rope is slowly turning into a noose. But deeper she goes, tighter is the noose around her neck.

Tension works for me. Writing is solid, aside from occasional lazy screenwriting. What I didn’t like are the twists. It is a spy genre, there is no spoiler here, grow up! Of course, there is a new twist element every 17 minutes of runtime. But eventually they start wearing thin. They no longer possess the kick or satisfaction. And the ending is so predictable, I am sure you will figure it out 20 minutes into the film. From this context, “Red Sparrow” is your regular, sub-par spy film. By no means it is “Mission Impossible: Ghost Protocol” or “Tinker Tailor Soldier Spy“.

Ivan Egorov, who looks more like Putin than Putin himself

Taking into account that unless you are kicking ass like James Bond or breaking necks like Ethan Hawke, spy films are usually boring as hell, this movie doesn’t feel like dragging. There is a lot happening on the screen at any time, there is very good tension and plot progresses at a steady pace. What I didn’t like is the runtime of the film. You will spend 2 hours and 19 minutes watching “Red Sparrow”. That is almost 5 minutes shorter than “Casino Royale”, with only a minuscule percentage of action compared to that film. What you have instead are multiple shots of gorgeous Jennifer Lawrence trying to learn art of seduction and manipulation and then proceeding to use that on other subjects. If you are into all that, this film is for you.

What pissed me off a lot was usage of Russian language. The action takes place in Russia (for most part), where, weirdly enough, CIA operative can say “Kofye, podjalusta” in Russian, but whole KGB and everyone else speaks in broken “Rashin Ekcent”. Listening to Lawrence and the cast (by the way, not a single Russian in the cast) say things like “Mama, Ay vill teyk keeir of yu” and “Yor kauntri needz yu” gets annoying very fast. I understand, if they wanted all realism they would have 75% of the film in Russian, with English subs. And nobody wants that. This is no “Inglorious Basterds”.

Something to note here, I salute the director, Francis Lawrence, for making this film R-rated, with blood and gruesome torture scenes. Oh, and also for including a fair amount of nudity. Here also goes a praise to Jennifer Lawrence to accepting being naked (for the first time) on screen. It would have been totally idiotic to have a film about seduction and prostitute-spies without nudity. 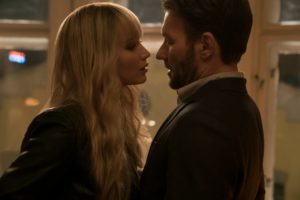 Jennifer Lawrence makes Dominika a real person. She is able to present Dominika as submissive in one scene and dominant in other. She is seductive and vulnerable. Emotional and cold. Gorgeous and simple. Her ability to achieve all these and more, carries this film through the end. Joel Edgerton plays CIA operative Nate Nash. Unlike his previous movies, he is more convincing as a smart, yet emotional spy. Makes me wonder, did he improve his acting or was he wrongly cast before? From supporting cast, I enjoyed Matthias Schoenaerts, who plays Ivan Egorov. And this was despite the fact that director went for Putin-look-alike. God, he looks SO MUCH as Putin, it was driving me nuts!

“Red Sparrow” is an engaging spy film, full of tension and plot twists. Jennifer Lawrence carries the film with her amazing performance. But unfortunately, it has a very long runtime and very little action.