With interesting hero and shining performance by Jon Hamm, "Beirut" blows with one-dimensional supporting characters and total disregard and ignorance of history.

Spy thrillers, in their simplicity (or often complexity) can get too boring too fast. Unlikely heroes, who can withstand any damage, complete ignorance of laws of physics and also twist upon twist upon twist situations tend to get repetitive and annoying. In that regard “Beirut” is unlike other spy thrillers. But only in that, it still manages to be an annoying film, just for other reasons.

In year 1972, Mason Skiles is top U.S. diplomat stationed in Beirut, Lebanon. A rising star, Mason enjoys lavish life of top politician who (so he thinks) masterfully juggles between different factions that want to grab a piece of Lebanon – Sunni Muslims, Shia Muslims, Christians, Israel, Palestine, France, England, Iran, Syria, USSR. With increasing fear of an impending armed conflict increasing in Beirut, he has a lot on his plate. The intricate balance is challenged by the Palestinian refugees who are fleeing from Israel. But with refugees unfortunately also slips in criminal. That is why he is shocked when his colleague and best friend Cal informs him that the Palestinian refugee child Mason has adopted is actually a brother of biggest known terrorist, Raffik Abu Rajal. Mason doesn’t want to believe him, but suddenly Raffik attacks them to steal his brother. In the ensuing gun fight Mason’s wife gets mortally wounded.

Ten years later, Mason is an alcoholic who lives by negotiating labor contracts. He is totally broken. Then one day, he gets a visit from old acquaintance who informs him that U.S. needs his help again. Reluctant Mason agrees to fly to Beirut. But the city he loved so much has been torn apart from civil war. And arriving to the Embassy he finds out that the reason he is there is because a certain U.S. spy has been caught and that terrorists are requesting to speak to only one person – Mason. 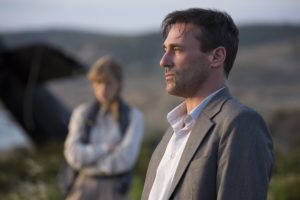 Mason (Hamm) tries to figure the way out

Mason is probably unlike any recent heroes of spy movies. He is not made of metal, he doesn’t break anyone’s neck. For the majority of film everyone ignores him as an alcoholic burnout and tolerate him only because terrorists requested to speak to him and to him only. He is not very smart either, having hard time figuring out 1+1. He is constantly under pressure of his trauma and he doesn’t want to be a hero at all. Yet he has to, in order to figure the way out of the mess he has stepped into. Story itself tho is not anything out of ordinary. Mason needs to figure out how to help hostage and at the same time he understand that he can’t trust anyone. There are forces on both (or maybe more) sides that would not want the deal to happen. This constant back and forth, spy games a-la “follow me” or chasing each other using transmitters is in every spy movie ever done.

Film shows Beirut as a city in ruins. There is a very stark comparison of Beirut in 1972 and 1982. Literally every single character comments on that. Yet, apparently “life goes on.” What was annoying the hell out of me, was how the characters and film tried to present this destruction and desolation. They are blaming literally everyone in the demise of Beirut, but themselves. See, Beirut for 20 centuries was a cradle of religious and cultural battle. Christians and muslims and jews lived together, but then Palestinians came and ruined everything. And then Soviet came and put oil to the fire and then Israelis have Mossad who wants to revenge death of Israelis. Literally EVERYONE is at blame, but Americans, who actually created this whole mess. Just read the history books.

So in “Beirut” all U.S. diplomats are complaining about how things got bad in Beirut. And writers are not correcting them. Well, what exactly did you expect? You had a big melting pot that you kept adding fire to. Did you think everything will get resolved on it’s own? In film, U.S. forces in Beirut are saviors. And this is actually reiterated in the ending of the film when one of the characters says “well, everyone won by this resolution.” What the hell are you talking about? Literally NOBODY won anything, only Americans did! And by the end of the film, conflict between factions has been deepened worse than ever. Stupid, very stupid. Arrogant and stupid.

Because the film doesn’t have much cliche spy thriller things it is actually very interesting to watch. There are no long chase or fight scenes. Or cheating each other scenes. Film plays out more like a spy drama, which are usually slow. Pacing, however, is nice. Director Brad Anderson puts cameras far with close-ups for more intimate shots. I enjoyed exploration of personal demons of our main hero. Ruins of Beirut and destruction was shown well and was very powerful. I also would like to commend the terrorist attack scene, which was unexpected, loud and, well, carried a big deal of terror. Overall, I think, except some repetition and redundancy, director did a good job. 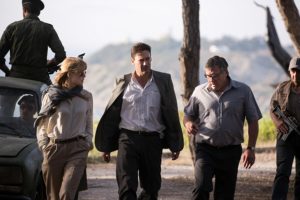 Mason (Hamm) and his new “friends” going to negotiation

Jon Hamm goes an extra mile with his character. As a person who is so separated and disgusted with all that is happening around him, he delivers a very solid performance. He is constantly trying to fight against forces that are trying to undermine him. Rosamund Pike plays CIA field agent Sandy that looks after Mason and also helps him. Her character is so incredibly dull and one-dimensional that I wanted to punch her just to get something out of her. Dean Norris (from Breaking Bad fame), Shea Whigham and Larry Pine play different U.S. State Department officials who are mostly just doing it for their own gain. They are also not very well written.

“Beirut” is an interesting addition to spy thriller genre, as it portrays main hero not as a deadly assassin like in “Atomic Blonde” or “Red Sparrow“. He is a troubled person who just tries to do best he can to save the hostage. A role that Jon Hamm really shines in. Unfortunately, very poorly written supporting characters and total ignorance of history downgrades otherwise enjoyable overall experience.