Immersive world, interesting story, worthy heroes and solid acting is shadowed by slow pacing in the middle, but show is able to recover itself towards the end and deliver satisfying ending

Science-fiction is making a big comeback to TV and Hollywood, there is no doubt about that. We have multiple award-winning TV shows that are feverishly accepted and consumed by hungry viewers. HBO has “Westworld,” Syfy got “Expanse,” British Channel4 launched “Black Mirror,” and now Netflix is offering us “Altered Carbon.” What is surprising, that all of these shows are in the mere beginning of their reign and still are able to captivate and even gain cult following.

End of 24th century. Takeshi Kovacs wakes up after 250-year-long “sleep” in a new body. Humanity has long defeated death by inventing “stacks” – alien-based device that is implanted into all humans recording every single thing that host does – his personality, memories, character, etc. Human body is no longer a constraint. If you die, your stack (given that it was not damaged) is just inserted into new (or previously owned) body – or “sleeve” and viola! You can run again. Or you don’t even have to die to change sleeve. If you are rich enough you can just buy yourself a new sleeve and become whoever you would like to be.

Before he was put to sleep – “iced” – Takeshi was a renegade revolutionary with extremely deadly set of battle skills. 250 year has changed a lot and he soon realizes that everything he fought against during his life has now become a reality. But he doesn’t have much time to enjoy his new body. He is informed that he has been awakened by mega-rich businessman Laurens Bancroft. He needs Kovacs’ help. See, weeks ago Laurens was murdered. He has been restored to his old backup and has no recollection, of course, of what happened to him. Everything leads to conclusion that he killed himself. But Laurens, who has been living for 300 years, will not accept the fact that he would just end his life. Takeshi needs to find his murderer. And then he will be free.

To complicate things, Kovacs pretty soon realizes that a lot of weird things are happening. Firstly, police detective Kristin Ortega has 24/7 surveillance on him. Second, he immediately attracts attention of some high-level criminals. Third, he realizes that the body he has now has belonged to someone who had his own share of enemies. And lastly that Laurens has extremely deep secrets. After all, you can’t just avoid death and not proclaim yourself a God.

First season of “Altered Carbon” is 10 episodes long. Series starts literally as classic film noir. Character has hateful monologues about reality and what not, there is a “damsel in distress,” soon Kovacs finds a sidekick, in a form of AI hotel proprietor. Somewhere around episode 4 show slowly takes a turn into more of action-fantasy genre. Kovacs’ investigation takes him to investigate various underground gambling, fighting and prostitution dens. Series really slows down somewhere by episode 6, unfortunately. There are multiple twists that basically put Kovacs on completely different track from his main investigation. Of course, it all is tied together in the end and season finishes with strong comeback and offers an ending that will not disappoint. 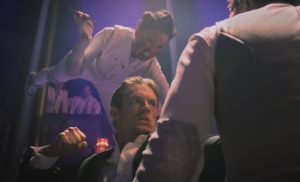 There is a lot of social commentary. Series is full with philosophical discussion on what is soul and why should we avoid death. I liked how the world was setup – although the technology to replace bodies exists only the richest of them all can afford it. Regular people still struggle as they used to do before. Yes, if you die you get a new body, but this body can be anyone’s. Early in the first episode we see six-year-old girl, who has died in accident, given a body of older woman. You should have paid, they tell her parents. There is also religious people, called Neo-Catholics who refuse to be revived when they die. Police though has permission to bring back to life criminals for interrogation or victims to testify in court. This world is so rich and

“Altered Carbon” stylistically resembles Blade Runner in every single aspect. Neon lights, rain and gloomy scenes make dirty city even dirtier. But unlike another Netflix crap called Mute, “Altered Carbon” offers totally immersive world. Virtual reality and AI simulation plays a big part, which somewhat give series a new edge. Also I really enjoyed the action scenes through the series. I have double feelings about is Kovacs’ backstory. Directors intentionally withhold information, thus artificially moving plot forward. Up until episode 4, we are given almost no clue about who he was and what he has done and then suddenly there is almost 2 episodes devoted to his past. 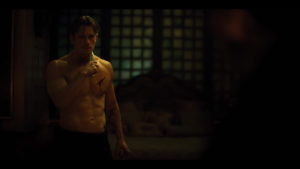 If I say that “Altered Carbon” has a lot of nudity, it would be an understatement. There is just a LOT of it. Mind, it is not more than Westworld and definitely less than Spartacus, but you will be surprised how many naked female bodies are there. One scene involves a fight with a dozen of totally nude clones. People are complaining that it is distracting. I don’t think it was distracting a bit, but then again even without nudity the series would have lost anything. It was just at times redundant, that’s all I am saying.

I have to give it to producers for a bold statement. “Altered Carbon” doesn’t have any A-list actors. Instead the cast is relatively unknown. Surprisingly they all deliver very precise performances. Joel Kinnaman plays new Kovacs and he is strong, cynical, sarcastic, unbending, and smart. James Purefoy is Laurens Bancroft and he is a total charmer as gazillionaire with God complex. I specifically liked the casting of Martha Higareda as 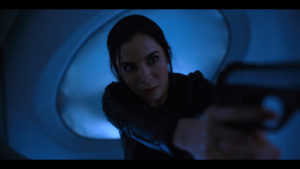 detective Kristin Ortega. She has short, dark complexion with curvy figure and is visually total opposite of basically every single female actress on the show. Higareda completely owns her part. She is strong, independent woman, who will not stop until she reaches the bottom of it. Since Kovacs is cynical and unemphatic, Ortega offers us a moral beacon for the most part of the season. Also I will mention Dichen Lehman and Ato Essandoh. Both deliver solid performances that require emotional investment.

“Altered Carbon” starts very strong, offers immersive world, interesting story and worthy heroes. Unfortunately pacing slows down drastically towards the middle and diverges from main storyline. But it is able to recover towards the end and deliver satisfying ending. Looking forward for Season 2.