There are enough bad films out there. Why the creators decided to make “Mute”, I can’t tell you. In short, it is very bad. Ridiculous plot full with holes, unconvincing acting, extremely weak screenplay, annoying visuals and messy editing make this film almost unbearable to watch. That’s all you need to know. Save your time and don’t watch the film. Also you can probably skip the review. But since you won’t, here it is:

Leo is mute. He suffered an accident in his childhood and his mother, being Amish, decided not to fix his vocal chords. But so does Leo, even though he is now all grown up, he has put himself in a “vocal exile”. He is barmen at a strip club in futuristic Berlin. He is in love with Naadireh, who is waitress at same club. Surprisingly enough she is also in love with him. Naadireh has a secret. She wants to tell it to Leo. She should tell it to Leo. But she doesn’t, because all that matters for Leo is that Naadireh is with him and he doesn’t need to know her secret, see. Then Naadireh disappears. Leo tries to look for her to no avail. Until he starts receiving weird anonymous texts.

Meanwhile, there are two underground surgeons. Cactus Bill and Duck are their names. Cactus Bill has a six-year-old daughter and he is AWOL in Berlin. He is trying to escape Germany, but for that he has to pay his dues by working for local gangster. Duck has unhealthy obsession with little girls. That’s it.

This is the core thing that is messed up with this film. And since writing is a mess, nothing can make this film better. Mute hero (Alexander Skarsgard), designed in the likeness of a regular Liam 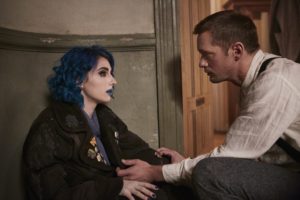 Leo and love of his life, Naadireh

Neeson type character gets into situation where he needs to get out of his bubble and do whatever it takes to save his love. Or so he thinks. We are supposed to root for this character, but he is so badly written that I can’t see how anyone would be on his side at all! Then there is the fact that he is not even the center of the film. Majority of the story takes place around Cactus Bill character. It is very annoying, until film tells us in the end that Leo and Bill are connected (which was not a surprise at all)

But even then it doesn’t make much sense! The whole movie literally takes place between this two. The contrast of their characters, personalities, moral values, backstories and developments is what supposed to be driving this film. Instead the resolution is awkward, fast and ridiculous. Which I think is best, because it would have made this film even longer than it is (already at almost 2 hours long). Supporting cast is even worse. Bunch of characters who we should not care appear in and out of the story at a random pace, just to have Leo go from place A to place B. There is not a single likable character in this film.

Then there is his girlfriend (Seyneb Saleh), the one that is the center (or one of the centers) of the whole film. Why Leo likes her, I have no clue. Maybe because she is the one and only person to ever speak to Leo, at all. She is supposed to see something in him, something others don’t. It is supposed to be a pure love. He is not just a mute, she sees beyond that. But from the resolution of the film we find out that she actually liked him because he IS mute, not in spite of it. So much for pure love, indeed. 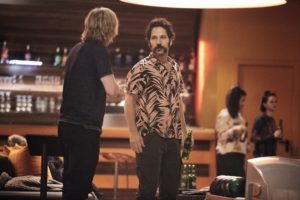 Paul Rudd in Mute. No comments.

Here I must note that the half responsibility for the lack of likability falls on the actors. First, you have Aleksandr Skarsgard trying something out of his shell, but what he basically does is just sit quiet. Because he is mute, see. He walks around with the notepad, which instead of using it to communicate with others, he just doodles into. All his traits make Leo look not just mute, but mentally impaired. And this is not only my impression, even other characters in the film refer to him as a big dummy. Paul Rudd playing ridiculous character Cactus Bill looks even more ridiculous in his weird handlebar mustache and most ridiculous when he tries to act seriously. Justin Theroux who plays his “friend” Duck is a creep, even without the whole pedophile context to him. Rest of the cast is not even worth mentioning.

“Let’s just throw in bunch of neon signs and have a stupid voice do public announcements over the speakers” was the idea of giving this film a science fiction look. This is the most boring display in any sci-fi film of recent that I have ever seen. There is literally zero novelty, zero logic and zero rationale to the whole science fiction aspect of it. This makes Lord of the Rings look like the greatest sci-fi movie ever.

Then there is editing. When you have a film that is slow, you just can’t have fast cuts. It just doesn’t make sense. In this film there are literally no shots that last more than three seconds. This is 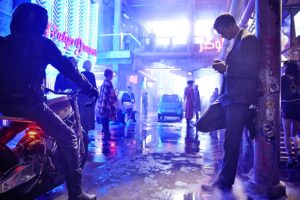 supposed to be a long and contemplating film, man! Not just random action BS made by Michael Bay.

Which is a shame, because director is Duncan Jones, whose previous works are acclaimed “Moon” and “Source Code“. This was apparently his pet project for a long time. Was it really? It feels like he did it just to throw off his chest.

It is clumsy, ridiculous film, that makes little sense. Badly written and directed, this film should be avoided, if possible. Another dud from Netflix, it solidifies the trend that Netflix is becoming a dump space for movies that otherwise would bomb incredibly at the box office.