For a film that is called "Traffik", it shows very little of actual horrors of sex trafficking. It is poorly written, has little suspense, cliche drama, and apart from strong performance by Paula Patton offers nothing worthy.

For almost the entirety of 96 minutes of runtime I honestly couldn’t figure out the “Traffik”. And not because film has an ongoing identity crisis (which it does actually). Conversely because film wants to become something that it unfortunately can’t, no matter how hard it tries. But why am I rushing, let’s take a closer look.

Brea is an investigative journalist. On the day of her birthday her boss fires her after confrontation that she is always pursuing something deeper instead of reporting on the cause. But she has her loving boyfriend, John, to comfort her. During dinner with their obnoxious friends, Brea finds out that John has planned a big getaway weekend with the goal to ask Brea to marry her. She is hesitant. John is a loving and caring man, but Brea is still not sure if she wants to commit. On the way to the gateway villa, John and Brea stop at a gas station. And while in the restroom Brea meets visible distressed woman, who whispers something like a code word to her. And thus, inadvertently, Brea and John are sucked into underground ring of sex trafficking. 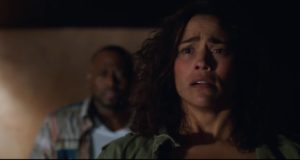 Deon Taylor wrote and directed “Traffik”, so I am combining these sections. Traffik” devotes first thirty minutes just to setup Brea character. To show how resilient and unbending she can be. She is fired for literally working too hard. Then it all turns into Brea questioning herself whether she is worthy of adorable and loving John. Why waste time on all this? Well because what happens next is series of very stupid decisions by characters. By giving an explanation to Brea’s personality film tries to show that the stupidity is not by chance, but actually because that’s how Brea is.

Then film starts building a weird tension. “Traffik” is a thriller after all, but tension is so fake, so superficial, that it never is actually pushing it all the way. There is a scene with couple fighting and it all is done so randomly and is so out of place with the rest of the film, that the only explanation to why it was done was to have one character leave the house. This random writing devices to get plot rolling and fall into places is so sporadic that you start yawning by the middle of it.

Brea (Patton) has an encounter with distressed woman

Another issue is action scenes and the ending. This is supposed to be a thriller. I don’t want a megalomaniac villain, but the bad guys in the film are extremely ineffective. They are supposed to be running an extremely successful trafficking ring, but the level of amateurism they show makes you wonder how exactly they did achieve the heights in this business. The bad guys in “Traffik” are the dumbest bad guys I have seen in a very long time. In comparison to them “Rampage” bad guys feel like Joker (Nicholson’s and Ledger’s Joker, not messed up crap of Leto’s). Ending in so abrupt it makes you wonder if producers ran out of money. There is no climax, no big reveal, no twist-upon-twist revelation, no “did she or did she not?” and almost definitely zero suspense in the ending.

Then there is a deep, dark topic of “Traffik”. Sex trafficking might be (as film actually very cleverly notes) a flavorful name of modern day slavery, but make no mistake, it is an undeniable problem that still remains one of the biggest issues globally. The first shots of “Traffik” actually tried to address it by showing young and attractive girl dancing in the club and then getting lured into a van, where she is abducted. I thought, this film IS going somewhere. Unfortunately, there is very little regarding actual brutality and horrors of sex trafficking and the victims through the rest of film. These depictions usually consisted of images of malnourished, drugged and beaten women, and that is all. 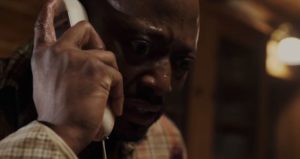 Paula Patton stars as Brea and she tries hard to deliver a believable character. I have to commend her, she is the only thing in this film that actually works, more or less. And she keeps film from falling apart. She is equally charming, beautiful, strong and vulnerable. Omar Epps plays her boyfriend John. He is a very good actor with wide spectrum, but he is really underutilized in “Traffik”. Rest of cast are very bland.

You might think that film that is called “Traffik” will deal more with the horrors and reaches of sex trafficking, but no. Apart from showing several drugged and abused women in chain, it doesn’t give us anything else. Film has poorly written screenplay and for a thriller, has mediocre suspense, cliché drama and ridiculously mild ending. The only positive factor is Paula Patton’s performance, which in turn is ruined by total under-utilization of the supporting cast.