Boasting main cast of Joaquin Phoenix, John C. Reilly, Jake Gyllenhaal and Riz Ahmed will make any moviegoer quite curious about the film. Indeed, all four of these actors are accomplished in their own way and can single-handedly pull any movie they are part of. But sometimes having good of everything might end up negating each other. “The Sisters Brothers” is a perfect example of this.

Brothers Eli and Charlie Sisters are assassins on a payroll of local businessman, The Commodore. Upon his request they hunt down and kill people that stole something from him. Their next mission is to meet another employee of Commodore – John Morris, who is tasked with tracking down some “thief” called Hermann Warm. Morris will report Sisters brothers of whereabouts of Warm and they will kill him. Unbeknownst to them, Morris finds Warm pretty fast, but is charmed with his good nature, friendliness and intelligence. He finds out that Warm is a chemist and has developed a “divine” formula that is huge game-changer in gold-digging industry. Morris decides to abandon his mission and instead join Warm in his adventure. But Sisters brothers are not to be fooled with and soon they discover Morris’ true intentions and are back on track. 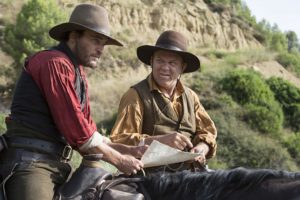 Charlie (Phoenix) tells Eli (Reilly) the details of the plan

Unfortunately, the thing that drags this whole movie down is the screenplay. Film starts pretty engaging. First scenes are satisfyingly intriguing and interesting. However, this charm disappears almost immediately. Film splits into two narratives, of Sisters brothers and Morris-Warm duo. And this turns into a sluggish fest of fast/boring routine endeavors each couple gets to experience. We learn who each of the players are through their interactions. But these interactions don’t lead anywhere and are surprisingly boring to watch in general. There are random dramas and events occurring throughout that absolutely nothing to do with the not only main plot but even secondary.

Character development, as a result, struggles greatly. Each of players should have their own traits and personalities. Charlie is a drunkard, who doesn’t care what happens to him, and Eli is caring and melancholic person, who values horses more than humans. Morris is highly intellectual person who tries to get away from his lavish old life and Warm is idealistic scientist who believes that society needs a savior. This looks all good on the paper and probably sounded amazing in general, but in the screenplay it all plays out extremely fake and ineffective. In result, our characters turn into one-dimensional beings. 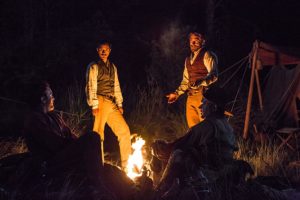 If that is not enough the plot also goes some place that make very little sense. Firstly, this is not a comedy. Not a single bit of it has humor in it. Yes, there are some random flashes of comedic flare by John C. Reilly, but there’s absolutely no need for them and at most they will just make you barely smile. Film suddenly receives a narration by one the heroes (who is keeping a diary). It goes so for a while and then just stops. To me it proves lazy screenwriting. It was there just because screenwriter couldn’t come up with anything else useful. Then the plot progression has no satisfaction whatsoever. You would expect sluggish development to build up tremendous tension and dread for resolution, but you will be surprised how film fails to get there.  And when it gets then suddenly we find out that there is no resolution. Not the one we needed, characters needed, story needed or film needed. Thus, the whole ending turns into a dull wrap-up. 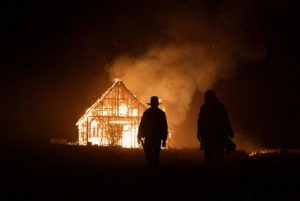 I think director Jacques Audiard did a fairly good job in terms of directing. I would even have given him a praise for taking sluggish screenplay and making the end product. However, since he actually co-written the screenplay I just can’t do that. Westerns are tricky, no doubt. Especially in a modern age if you are settling to make a western you should know better to make it outstanding. Modern westerns are romantic endeavors, with ultra-wide shots of endless sunsets and vistas, heroes looking at a flame after long ride, contemplating their lives, philosophical musings on “who are we and what we do on Earth”. All this is intermingled with explosive action sequences, wild chase scenes, incredible tension and satisfying resolution.

Audiard gives us nothing of this. All action sequences happen either in complete darkness with just flashes of gun flares (I admit it, looked really cool first time, but ONLY first time). All shootouts either happen off screen or are from perspectives of supporting players. As such audience always arrives to the end of shootout. Fine, you might say, it is just a style, film surely must be concentrating on romantic aspect of it. And you will be wrong. There are no lavish landscapes. Just some dudes riding their horses somewhere. Philosophical musings exist only in weird conversations and there is really no romanticism in anything that happens. 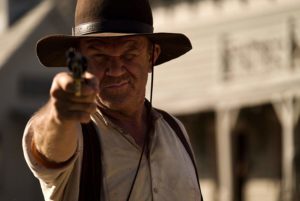 Eli (Reilly) is a true star of this story

John C. Reilly rocks. That’s just to sum it all up. In his probably biggest non-comedic role he manages to show all power he actually possesses as an actor and beyond. He is the main reason “The Sisters Brothers” gets out of the hole screenplay and directing set it to. His performance is eclectic and mesmerizing. Unfortunately, all this is dragged down by the sheer amount of comedic work he has done in his life. I just couldn’t get an image of Cal Naughton, Jr. from “Talladega Nights” and Dale Doback from “Step Brothers” out of my mind every time I would see him in a dramatic scene. And subconsciously I was expecting him to say something weird and crack me up like he did in “Kong: Skull Island”. It’s a shame really, because he was amazing.

Rest of the cast are unfortunately wasted. Always phenomenal Joaquin Phoenix and Jake Gyllenhaal have literally nothing to do. They have no challenge, no evolution, no reason to shine. They are just there to fill the roles. Don’t get me wrong, they do a great job. But it is nowhere near performances of Phoenix in “You Were Never Really Here” or Gyllenhaal in “Prisoners”.