Fun action. Nothing more and nothing less. With incoherent and ineffective screenplay and supporting characters that are more interesting than main heroes, this film offers nothing that will make it stand out.

Newest entry to Predator franchise promised a lot. Indeed, multiple attempts to make a proper sequel to Arnold Schwarzenegger classic were made, but were either a mess or not really economically successful. One might even argue that “The Predator” didn’t even had to try hard. But the demand for an adequate sequel was high. And it seems, on some level creators did embrace and delivered expected entertaining spectacle.

An alien spaceship is pursuing another one through space. A brief ripple of time-space continuum and runaway spaceship gets thrown into vicinity of Earth. It has to crash land. Unfortunately, it crashes in the forest of Mexico, right where U.S. Special Forces are conducting an operation. Army sniper Quinn McKenna is first to discover the spaceship and also what seems to be body armor of alien creature. McKenna knows something is happening as soon as he sees US helicopter flying over. So, he grabs alien’s helmet and runs away. In the meantime, alien creature is captured and brought to secret government facility in U.S.A. So is biologist Casey Bracket who is escorted to facility to help investigate alien creature genome. She is very surprised to find out that this is not the first time aliens made landing, that they are extremely dangerous and kill for sport. And also, they are called Predators.

Problems with “The Predator” start very early. Not that I did expect extreme sophistication of plot and structure, but there are a lot of issues with writing. There is just not enough room to fit all what has been written on the paper to the screen! Unlike other movies of this genre, “The Predator” boasts a huge amount of supporting cast members. When usually these characters would get bottled in and left to die one by one, there is not enough time to get them all killed. And screenplay doesn’t even offer us a bottle situation. There are good guys, bad guys, semi-good guys, semi-bad guys, neutral guys. All kind of guys. Film dives deep to analyze intricate details between the characters and just gets lost in it. 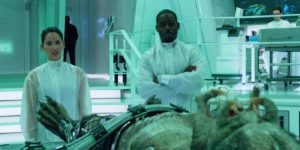 No, I am probably wrong. Screenplay probably had it all clear – the interactions, the logic and all. How one scene ties into another, how one dialogue leads to new information. But since film is just couple minutes shy of two hours I am sure there was a lot of things left on the editing floor. As such film seems very chaotic at times. Characters make some weird choices that we have to take for granted. Literally at one point I was wondering where RV came from (no spoilers). You will see what I am talking about. And I am sure there was a scene or two explaining all that but was just deleted from final picture.

Is it problem of editing though? Was so much cut that screenplay became incoherent and ineffective? I highly doubt that. Because editor did leave several unneeded scenes and jokes. I am more and more sure that this is really screenplay problem. And I want to believe that this film could have been way better if it would have been made into two movies. Or if the screenplay was butchered properly to have less things happening in one single film.

On the other hand, film has characteristic to Shane Black style dialogues and character interactions. When film wants to get funny it does so very well. There are a lot of self-satirical references, running gags, you know, simple stuff that can make film from being a stupid mess to somewhat tolerable B-rated, grindhouse film. I have to admit that film achieves that very well. 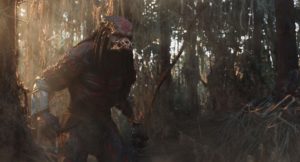 Yeap, that is him!

Problems with editing and script aside, Shane Black does a decent job with directing. This especially shows itself during action sequences, which are adequately made and satisfyingly violent. Packing enough punch to make previous film jealous, “The Predator” delivers a very potent image of alien creature going berserk. Isn’t that all why we came to see “The Predator”? To see ridiculously ugly creature from outer space that enjoys killing other creatures for a sake of it, rip a hole in man’s guts and pull out his spine? We don’t need a proper script for that! We just want gore, guts and gurgling sounds!

As a result, “The Predator” turns into an action film. Unlike the rest of the series which had some kind of balance of action, horror, science fiction and thriller elements, “The Predator” is pure action film. Nothing more and nothing less. Whether you like it or not depends on what you actually expect of it.

When supporting characters are better than main ones

“The Predator” is one of the rare films that has supporting characters much better than the main one. How weird is that? And yet we have extremely shallow and one-dimensional main characters in face of Boyd Holbrook, who plays sniper Quinn McKenna and completely not interesting Olivia Munn playing biologist Casey Brackett. Oh, and also Sterling K. Brown, who is extremely talented dramatic actor playing extremely uncharacteristic bad guy. Even in mediocre “Hotel Artemis” he had a better role.

Supporting cast on the other hand shines through always fun to watch Thomas Jane, “Game of Thrones” alum Alfie Allen, comic star Keegan-Michael Key, charismatic Trevante Rhodes, talented young actor Jacob Tremblay, and, hell, even full of fight Yvonne Strahovski. Every single on of them are more defined and developed than the main characters. Again, this might be just the same issue of screenplay.

“The Predator” gives what fans wanted to see – alien creature wrecking havoc. Nothing more, nothing less. Shane Black does very well during action sequences, but anything else drags into incoherent mess, with supporting characters more interesting that main heroes. If you like the kind of movies where you get drunk and just enjoy the spectacle, “The Predator” is definitely for you. You will find it fun and entertaining. Otherwise, it will seem like a freaking train-wreck to you.