On paper “Hotel Artemis” looks very intriguing, to say the least. It is set in a dystopian near future, has a very strong ensemble cast, offers a lot of blood and violence, and presents a compelling story. That is all on the paper though.

Los Angeles is drowning with riots. Nonstop fights break out between civilians and government. In all this chaos two brothers, codenamed Waikiki and Honolulu decide to rob bank. Their plan goes awry and Honolulu gets heavily injured during ensuing gun fight with police. There is only one place brothers can turn for health assistance and protection – an infamous, underground, criminal clinic “Hotel Artemis”. It is run by an enigmatic “Nurse” and her bouncer and orderly “Everest”. Together they provide an exclusive service to criminals of Los Angeles for a nominal membership fee. The only condition Nurse imposes on her clientele is that they follow the “house rules” to the point. Otherwise guest won’t be staying on the premises for long. Waikiki and Honolulu show up at Hotel, thinking that the hardest part is over. But they are not the only Hotel guests – there is weird, psychotic arms dealer, Acapulco, and a deadly assassin Nice. And soon they all find out the lord of underbelly of Los Angeles, The Wolf King himself is heading to the hotel.

“Hotel Artemis” is written and directed by Drew Pearce, who is known for writing “Iron Man 3” and “Mission: Impossible – Ghost Nation.” But unlike these films, “Hotel Artemis” turns out to be a very messy film and I think it all starts with the screenplay.

The biggest problem is that there is a big identity crisis with the film itself. “Hotel Artemis” just doesn’t know what it wants to be. The film has great amount of cartoonish violence that is in direct conflict with serious dramatic scenes. There are comedic undertones and then dramatic backstories. This back and forth creates a weird feeling that the film was made of several ideas just thrown in together and mixed for no reason whatsoever.

Story itself is mediocre at best. Heroes are very underwritten. There is very vague explanation to their actions, they only speak in quotable proverbs, and come and go as they please. This total lack of concern to the heroes really downplays drama that film tries to build between them. Then there are actions of the characters that are in direct contradiction to who they are and what they represent. They are all supposed to be hard-boiled criminals, but as we will see they all makes such childish mistakes, uncharacteristic decisions and show very minimal “badassery” that you immediately ask yourself how these guys can be best criminals?

It all could have been forgiven have the film offered us something worth watching. Like crazy choreographed action scenes, or mind-blowing cinematography, or heck even a reliable directing. But “Hotel Artemis” doesn’t do any of these. Not at least to satisfying degree. There are fight sequences that start nice and progress swiftly, but as soon as something interesting starts to happen or viewer gets mildly entertained these sequences either end or are cut to other scenes. It is so annoying.

And then there is the ending. Without spoiling much I’d just say that film builds up for some kind of big showdown and it all goes according to plan until showdown just dissipates. It is so anti-climactic that you just keep wondering if there will be some extra scenes. Nope, that was all that there is. 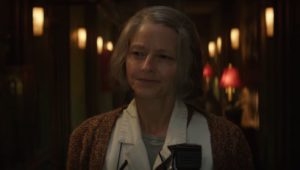 What is Jodie Foster doing in this film?

Film has a very strong and very unique cast, but casting decisions were just horrible. Jodie Foster plays lead part as Nurse, and honestly, I can’t tell you why exactly she chose to play this part. Not that she has lack of movie offers or needs to be in this movie. She is an acclaimed actress and director herself, so couldn’t she see all the problems with the screenplay before signing up for this project? I have no clue what she is doing in this movie. Dave Bautista plays her quiet, but strong assistant Everest. His character is supposed to be big, strong and dull. Bautista is nothing but dull. I know it will sound weird, but Bautista shows an emotional range he shouldn’t have.

Also, there is Sterling K. Brown who plays Waikiki. He is a serious dramatic actor, not an action movie hero. And he can’t be both. I wish that he would, but he just can’t. Charlie Day is typecast again as a crazy, neurotic, screaming arms dealer, who doesn’t do anything but annoy everyone. Jeff Goldblum plays same weird meta version of himself we have seen hundreds of times. And Zachary Quinto is there only to fill the space. The only cast member who fits her role perfectly is Sofia Boutella as sexy assassin Nice.

“Hotel Artemis” feels like wasted potential to be a very entertaining movie. Totally misused ensemble cast, weird characters and ridiculous story arcs don’t help otherwise dragging script. And whenever this film does get interesting, the scenes are either over or cut to other scenes.