While moderately funny and with nice chemistry between Faris and Derbez, film still is a mediocre comedy never reaching even the level of the original film

For a mediocre comedy, “Overboard” is actually not that horrible. Take it as a compliment or complaint. Being a remake of the film of the same name, starring Kurt Russell and Goldie Hawn, “Overboard” offers laughs, but doesn’t get close to the heart of the original film. Why?

Kate is a single mother of three girls. She struggles to make ends meet. Thus she works as a pizza delivery and also a maid for hire. On top of that, she is trying to pass nursing exam. One day she is invited to clean a big, luxurious yacht of billionaire Leonardo. He is total opposite of Kate – lazy, arrogant, spoiled, careless and total diva. While working he insults Kate, but she won’t stand it. Pissed off at injustice towards her, Kate tells Leonardo everything she thinks about him. In return Leonardo just pushes her off the boat and throws her cleaning equipment to the ocean. But karma takes its toll and later that night drunk Leonardo also falls overboard. He wakes next morning on the shore with amnesia. When Kate sees his face on the local news, she realizes it is a perfect opportunity to make him pay for everything. So she decides to bring him home and claim that he is her husband!

Leonardo (Derbez) telling Kate (Faris) that he is not paying her

Unlike the original film, the roles are reversed. In new version, the spoiled princess is Leonardo and hardworking single parent is Kate. This mostly works and gives opportunity to introduce new jokes. However, film lacks the charm of the original film. In there Goldie Hawn’s character was a extremely annoying and thus every unpleasant thing that Kurt Russell inflicts on her seems to be deserved. In the new film this doesn’t feel as much. Yes, Leonardo is pretentious and a pain to deal with, but his character doesn’t feel as spoiled as Goldie Hawn’s character.

Director Rob Greenberg uses situational comedy elements throughout the film. There are a lot of small laughs, but nothing too crazy. This film will leave you more smiling than outright laughing. Also there are a lot of jokes reused from original film. Some work well, some leave you wonder if the writers couldn’t come up with something original. Also I thought the reveal in the end was very mellow in the new film. 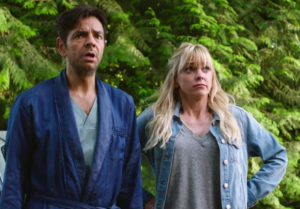 Anna Faris as Kate and Eugenio Derbez as Leonardo are fun to watch on the screen. They seem to fit each other well and both can handle the requirements of comedy films. Rest of the cast are hit and miss. Children are completely pushed to the background and I wished they had bigger roles than that. Regardless, I think there was a possibility to make supporting cast to have more impact on the screenplay and also on the film.

Being a remake, new “Overboard” brings nothing new to the original film. It has some situational laughs and gags throughout and Faris/Derbez duo fit awesome on the screen together. It is a mediocre comedy and it plays like that.