Interesting premise and nice character backstory drives the plot of TV show, which struggles because of ridiculous decisions by characters, extremely dull pacing and mediocre villain.

Space ship is crash landing. Sitting in the hub, trying to subdue their anxiety are members of Robinson family. They know that computer will take care of landing, so all they can do is just sit tight and play cards. They were on the way to Alpha Centauri aboard mothership Resolute to establish a colony. And now they don’t know what happened and why are they crash landing. We will soon learn that they were handpicked to be on the ship. Despite being a family, each one of them had to pass a rigorous test to fill the needed position on the ship: Maureen Robinson is mission commander. Her husband John is mission pilot and ex-military. Their daughters: Judy is doctor and Penny is mechanic. Their youngest is 11-year-old brilliant engineer Will.

Landing is not soft at all. Their ship lands on what seems to be an ice mountain, triggering avalanches and ice movement. They don’t know where they are, planet seems totally unfamiliar and yet has breathable air. Space ship starts sinking so they had to abandon it immediately. While trying to recover batteries from the sunken ship, Judy gets stuck in the immediately freezing waters. Family needs to act fast to free her out. At this point they don’t care that apparently the reason they crashed was because their mother ship was attacked by an alien robot, that surprisingly also crashed on the same planet. In fact, not so far from the Robinsons. And that robot might not be the most dangerous thing that survived the crash landing. 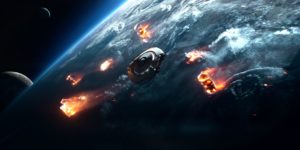 Jupiter 2 crashing to the planet

In the best tradition of Netflix series, season 1 of “Lost in Space” is also 10 episodes long. And the way it is structured might seem pretty weird. First couple of episodes play out like a survival video game. Go there, gather this, travel back, click here, do that. And repeat through different quests. Then the show makes a wild turn and totally abandons that idea and becomes family drama. Last two episodes becomes an action piece.

What I did enjoy is that each family member was given an independent backstory. Series pick us up from the crash moment, but there are flashbacks to what happened almost through whole season, even up to the last episode. These flashbacks basically answer most of the questions we have and help understand motivations behind each character’s action. There is a certain family drama. Maureen and John are on the brink of divorce, the only thing keeping them together is their children. I enjoyed their story arc, it gave them more emotional context to operate in. Maureen seems to be strong and independent, after all she is not only an accomplished scientist, but also managed to raise three children, while John was constantly away on military deployment. John knows literally nothing about his children. He understands and regrets that and tries to do everything to connect with them.

Children also have their skeletons in the closet. Judy, despite looking tough and agile like her mother, is still green and still needs a push to overcome her fears of being independent. Penny is a teenager, who no one listens to and who desperately wants her own space. And maybe a little faith from her parents. Will is a brilliant kid, but totally lacks social life. He has no friends and is in desperate need of father figure he missed so much. All these conflicts and their resolution is the backbone of the whole series. 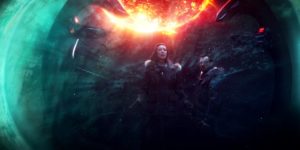 While emotional conflicts between the characters carries “Lost in Space” it is that these exact conflicts that create most of the problems through the series. Characters constantly are trying to talk to each other, explain their feelings, or vice versa not tell anything because they are afraid how the other party will react to that. This turns otherwise potentially fun premise into an emotional rut. You will be surprised how much plot progresses because at some point children decide to withhold information from their parents. And for no apparent reason! Also, emotional state of several

members of the family leads to almost a disaster that could have been easily avoided.

As I mentioned above, episodes 3 to 8 are extremely slow. There is a lot happening, but everything is done with such slow pace that I wanted to give up watching the show. There were several cliffhangers throughout, that were never resolved or resolution extended to be the whole new story arc that didn’t lead anywhere. Like fuel recovery mission. Feels like it was written to fill the gaps and have an extra episode for nothing. 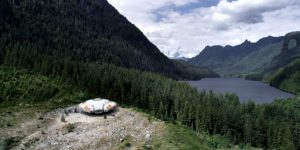 Other issue I had was with locale. The planet, at first seemed totally alien-like and full of danger. It turns out the planet is not that different, neither physically or visually from Earth. I mean, you can’t just add couple of moons and some weird insects/bats/hippos and call it an alien planet! Do some things to it goddamit! This is not 60’s, you can make ANYTHING with some CGI and whatnot. Otherwise it pretty much looks like a postcard view from Canada, Alaska or Iceland.

Series also has an identity crisis in terms of audience selection. For the whole run of season 1 “Lost in Space” juggles between being a kid-friendly space adventure to adult oriented survival and drama. There is certain emotional depth to it, so series is either too dark for kids or too lame for adults. Not sure why Netflix chose to do it. Totally messes the whole experience.

There is nothing much I can say about acting in “Lost in Space”. The actors do their job, but it is surprisingly the actors who play the children – Taylor Russell (Judy), Mina Sundwall (Penny) and Maxwell Jenkins (Will) who really shine. Firstly, I have to compliment acting department, they literally chose child actors who look like their on-screen parents. I even had to google if Mina Sundwall was an actual daughter of Molly Parker or not. Second, they are probably the sincerest actors in the film. Judy is strong and independent young woman who is just on first steps of her life path. Russell shows deep internal struggle, yet externally is determined and in complete control. 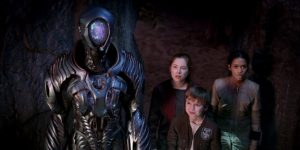 Penny is a teenager who just wants to live her life. She wants for everyone to stop treating her like a kid and is the only one who completely misses her old life on Earth. Sundwall is able to portray her not as a moody princess, but as a girl who just wants to have a life of a teenager. She wants to fall in love and be loved. Will is young kid who needs a friend. Not a father, but just a friend. Someone he can talk to and share his thoughts. Although I found his character annoying, I did enjoy how Jenkins was able to show everything that was requested of him.

That I can’t say about the villain, Dr.Smith, played by Parker Posey. She was supposed to be a psychopath manipulator, which requires constant shift in her performance. Unfortunately, Posey can’t deliver that wide spectrum of emotions. Her manipulative version was good. She felt genuine. But whenever we see her true self, it just seems fake. And that ruins the whole picture.

“Lost in Space” has an interesting premise. Season starts as a survival, but then turns into a family drama and ends with action. These shifts are not subtle, especially drama stage seemed totally slow and at times incredibly dull. Season had 10 episodes, and believe there is enough ground to cover for 10 episodes, yet some of the episodes have been poorly structured. Emotional backstory to the Robinson family was a nice addition and made heroes really relatable, however most of the plot is dragged because of the inability of characters to resolve their issues. On top of that, the villain was not written/executed well.