Bruce Willis version of "Death Wish" could have been a big hit in 90's, but has little to offer to modern action films

There was an era when an action film like “Death Wish” would dominate the box office and hearts of an average moviegoer. Crazy stunts would that movie have, incredibly dull plots, a lot of ass-kicking, face-breaking, gut-punching and witty one-lines. Blood and viscera spilled all over the place. Frantic hero killing in the name of revenge. Explosions, car chases, mandatory ear to ear neck cutting. And it would have names attached like Stallone, Schwarzenegger, Lundgren, Van Damme, Snipes. And Willis would also star. Wait, Willis is in this film! Oh well then, let’s see what we have.

Paul Kersey is a successful surgeon. Working in Chicago area hospital he sees it all, but recently it has been mostly gunshot victims. Crime wave is taking over Chicago. Gang-related violence is on the rise. Paul can do nothing but try to save next poor soul who lays on his operation table. At home a loving wife and caring daughter waits for him. Paul thinks he achieved a lot in his life. Especially providing his family and looking after them. He thinks they are safe. Tragedy strikes when three robbers break into their house, assuming nobody’s home. But Paul was called to ER, so his wife and daughter had to come back early. Tensions are high and standoff ends with Paul’s wife dead and daughter in coma.

Paul is broken. All his life was shattered in a moment. He buries his wife and rushes to the side of his daughter. Police detectives offer only condolences. The have no leads. Literally buried under hundreds of murder investigation, they have no solutions to suggest, but to wait. Wait for somebody to slip up. Something to come up. Paul, unfortunately, can’t just sit. He has to take control in his own hands. That is why he decides to hunt down the murderers of his wife.

“Death Wish” is a remake from a film of the same name, starring Charles Bronson. I have never seen it, I will confess. Willis version of “Death Wish” focuses on a single notion that no matter how much good you do, no matter how smart and pro-active you are, one can never be safe. You can hide behind big walls, but there is no insurance that bad guys will never ever find you. It is a powerful manipulation and propaganda tool, that has been known forever. Not being able to protect one’s family is a direct analogy of male impotence. Now, you might argue that how much guns and walls you need to make you feel safe. Is that really the solution to all problems?

Script itself is interesting, but nothing more. In perspective, “Death Wish” is your standard 90’s action film. Not even 80’s, when action films were trashy enough to be good, but late 90’s, when the genre started to fade away. Reused revenge plots and character evolution might be way to familiar for a constant watcher. I didn’t, for example, like that Paul was able to track down the murderers quick, let alone find them at all! I can see him going all Batman and starting delivering vigilante justice, but to have that luck? Nope. I enjoyed how film also at least tried to address vigilantism in genera. Also the inclusion of discussion on the topic by various radio hosts delivered much needed commentary. This was never deeply explored though. 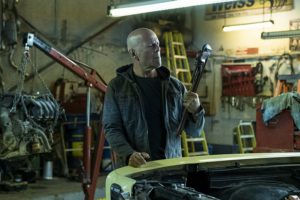 Bruce Willis is Bruce Willis. Emotional when needed, charismatic otherwise, brutal in his alter-ego. He plays solidly, though his age is clearly showing up. There’s very little hand-on-hand combat. All action is contained to gun shooting. Which is good, but then again this is no “Taken” or “John Wick”, by a long run. It kind of makes you wish this movie to be made couple decades earlier, when Willis was not a mere shadow of himself. But then, I have to give him credit for not trying to show his martial skills. You don’t want to look washed down. We don’t need to be reminded it looks ridiculous. We have Stallone for that.

Eli Roth is a very surprising choice for a director. I mean, this is the guy who did “Hostel”. Surprisingly enough, he does a decent job on “Death Wish”, delivering his least brutal film yet. But at the same time, the film is rated R. Roth is able to include several of his signature gory shots. And for that I am awarding him one more star. This film could have been even worse if the violence was watered down. As such though, Roth manages to maintain action film pace with strategically placed torture and blood scenes. Pacing is also nice. Roth manages to stay on top of the film, not letting the hero to turn either into a masked hero or a depressed mush.

By all standards “Death Wish” is a movie of bygone era. It is OK action film, which have almost no place in modern cinematography. It lacks qualities of modern action flicks and is never able to rise to it’s full potential (if there ever was any). Bruce Willis still got it and he visibly enjoys being Paul Kersey. But otherwise all this film will ever achieve is to make you re-watch Die Hard, Commando, Double Impact and Demolition Man.