"Blockers" is able to provide something that sex comedies often miss - heart and soul. Film kinda loses it's pace and magic towards the end, but still "Blockers" is the best teen sex comedy since "Superbad".

Sex comedies, as a genre, is probably the second easiest in film industry. Take some awkward shy characters (teenagers), define sex quest (lose virginity), add camaraderie (best friends forever), throw in a deadline (prom night) and humiliate them all. Easy formula. In case you are wondering, easier than that is formula for “romantic heartbreak” films – girl falls for guy, guy returns love, guy/girl dies. But that’s another story. Problem with sex comedy genre is that there are hundreds of films, exploring crazy, weird, stupid, gross, and ridiculous adventures. No one takes them seriously, because there is nothing to take seriously. Except that every once in a while there will be a movie, that will take the formula and apply something different to it, something unique. And that will make the film stand out. “Blockers” is a film like that.

Julie, Kayla and Sam are best friends since they started school. Which should technically make their parents to be friends, as well. Julie is raised by her single mom, Lisa, who has abandonment issues. Kayla has overprotective, macho father, Mitchell. Sam’s father, Hunter, is absent from her life, due to fact that he is divorced from her mom. Day before their prom night, Julie announces to Sam and Kayla that she is set to lose her virginity to her long-time boyfriend on the prom night. Encouraged by her friend’s decision, Kayla also signs up. She doesn’t have a boyfriend, but that’s fine. She is not looking for a magical moment. Sam is reluctant at first but, feeling that she will be missing out, also agrees. So the girls make the pact. Unfortunately, their parents Lisa, Mitchell, and Hunter, find out about their plan. And despite that they should know better, they decide to stop girls from “making worst mistake of their lives”. 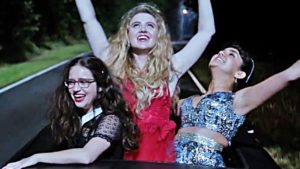 Girls (Adlon, Newton, and Viswanathan) are ready to party!

There is several things that sets apart “Blockers” from other sex comedies. First, it flips the gender of teenagers to be girls. I am sure there are sex comedies with female heroes in it, but not exclusively. Three girls want to take a big step in their lives. Not only they have different priorities than guys would, each of them individually has own reasons for going through with it. Lisa is in love with her boyfriend, they have been together for a while and she believes it is time and moment to take it to next level. She wants it to be magical, with rose petals, candles, and slow dancing. Kayla on the other hand, doesn’t want to wait for that magical moment. She just wants to get it over with and have fun. Sam doesn’t want to have sex. Not because she is not ready, but because she is not even sure if she likes boys at all.

Then there are their parents. The story abandons girls for a while and concentrates on Lisa, Mitchell and Hunter. They also have all different stories. It’s not all about “my girl is having sex” deal, for each of them there is an underlying issue. Lisa is afraid losing the only person in her life – her daughter. She feels betrayed by Julie lying to her about her plans and also doesn’t want for Julie to repeat her mistakes. Mitchell doesn’t want to believe his daughter is turning into an adult. He thinks that he needs to protect her from EVERYTHING. Including herself. Even never-do-well father of Sam, Hunter, who has been absent from most of her life, has a proper reason. He suspects Sam’s doubts about opposite sex and doesn’t want her to make mistake by going against herself.

These backstories add several layers of dimensionality to the whole film. While trying to catch up with girls, three “crazy” parents have to go through series of mishaps, including being kicked in the face, breaking in house, fondling male genitalia (yes, you heard me right), participating in uncomfortable beer “chugging” contest, and also getting electrocuted. Their adventures, often hilarious, sometimes emotional, at times borderline gross, nevertheless offer something new. Laughs are mostly situational, forcing parents to act in opposite of who they are.

Another thing I enjoyed, that there were no bad guys in this film. A new thing, probably something coming from era of Judd Apatow produced films (note that, this film is produced by his two frequent collaborators – authors of “Superbad”, Seth Rogen and Evan Goldberg). Even the boys, who the parents are trying to prevent the girls having sex with. They are shown to be equally awkward, shy, cool, and not at all creepy. Parents are only fighting against their own prejudice and their own selves.

One more unique aspect of this “Blockers” is that it was directed by female director, newcomer Kay Cannon. I think it was very wise choice on the part of producers to have woman direct the sex adventures of three girls. Film really needed that female touch. She delivers a solid job, in my opinion. Her pacing is nice for the majority of film. First two thirds of the film are fast, intense and to the point. Towards the last third though, film however started to lose it and never recovered. I understand the emotional aspect of the film to take over the comedy, but it felt a little raw, unpolished. In comparison, “Superbad” also offers an emotional ending with minimum comedy. But in there, the ending, which also lacked comedy, was very well explored and never felt out of touch with the rest of the film. 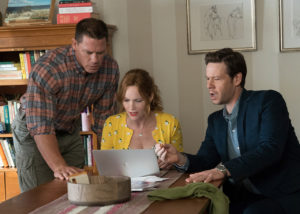 Casting of “Blockers” is perfect, as the screen chemistry of literally both parents and girls is phenomenal. John Cena constantly steals the show as over-protective Mitchell. He is macho man, who also has a very emotional side. This contrast makes him so fun to watch. The way he looks and acts reminds me of comedy works of Schwarzenegger. Leslie Mann, as Lisa, is as usual funny and brilliant, but in my opinion she was a little typecast. A little bit more quirkiness to her character I think would have helped. Ike Barinholtz looks a little out of space in the beginning with his creepy character. However, as film progresses he grows on you. Girls are Kathryn Newton (Julie), Geraldine Viswanathan (Kayla) and Gideon Adlon (Sam). All three of them are amazing casting choice. They look and feel innocent, at the same time ready to move on to grown-up life. Kathryn is cute and determined, Geraldine is strong and independent, and Sam is reluctant and confused. All three deliver to the point performance.

“Blockers” is able to provide something that most genre films are missing – heart and soul. Film is funny and at the same time has very well defined characters and storylines. Unfortunately film started to lose it’s pace and magic towards the end, though, but still “Blockers” is one the best teen sex comedy of our decade.