"Upgrade" is a fresh addition to sci-fi genre with surprisingly good screenplay and gory violence that will keep you on the edge.

“Upgrade” is a rare film that will surprise you. Not only because it is a good film, but because it is a film that is not afraid to do what it wants to do. It starts cheesy, a motive that you have probably seen a hundred times. But then it slowly evolves into something different, powerful, and I would even say unique in modern cinema.

In near future, self-driving cars and robotic prosthetic devices are no longer science fiction. But Grey doesn’t want to be in step with the World. Despite the fact that his beloved wife Asha works in robotics company, Grey hates all computer thingies, instead preferring to get his hands dirty. That’s why he is a mechanic, rebuilding old muscle cars for billionaire collectors. His latest client is a tech CEO – Eron. In their last visit, Eron shows Grey and Asha a prototype electronic chip called STEM, that he claims is capable of doing ANYTHING a human can do. Right after that Asha and Grey get ambushed by some criminals. They brutally murder Asha and let Grey die by paralyzing him. Grey is hurt. He lost his beloved wife and he can’t even move his finger. That is why when Eron shows up and offers him a super-secret surgery including implantation of his STEM device into his body, Grey doesn’t think too long. And he gets his “upgrade”. 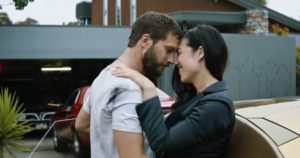 As I mentioned, from beginning film is full with cheesy cliches. You have a hero who hates modern technology and prefers to get his hands dirty. His loving wife keeps telling him he needs to get used to computers taking over the World, but Grey doesn’t want to listen to her. Then bad guys kill her. And in the best manner of your regular superhero movie, Grey gets unique opportunity to come back to life.  In “Upgrade” this opportunity is STEM. There are bad guys that hero wants to punish. And then he gets to avenge his wife, right? This is where film starts to diverge from formula. Up until this point in the movie you might think this is another “John Wick” at best or “Death Wish” at worst, but film gives you something what both of those films miss – a pretty decent story evolution.

Leigh Whannell, known mostly for his work on “Saw”, wrote and directed “Upgrade.” The strongest thing about film is the screenplay. Story keeps evolving and changing as we watch the movie. And if you might feel that you know where this film is going, “Upgrade” offers several new plot elements and gives you something else to think about. Yes, this film is not as philosophical as another AI film “Ex-Machina,”. It doesn’t offer much on the discussion of how our lives will change by conscious AI. Yet it also isn’t as straightforward as “Robocop”. As a matter of fact, the writing is so good that I kept thinking that this film would have made a perfect “Black Mirror” episode. 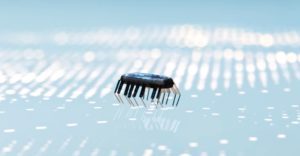 STEM is waiting to be implanted

For the most part of the movie, you might think that you are watching a Hollywood film, but then you realize that “Upgrade” has nothing to do with Hollywood. You can feel that the budget is limited, but under no circumstances Whannell lets you know this. The action scenes are solid and adrenaline packed. Drama scenes are steady and emotional. But despite this, directing is the weakest part of this film. Yes, the film looks good, but that’s all! There is nothing that stands out from directorial work. I kept getting the feeling when watching this film that action scenes could have been crazier and drama scenes could have been more emotional.

What I want to give Whannell credit for though is his decision to make the film R-rated. And this is hard R-rating with broken limbs and cut faces and a lot of blood. Film is gritty, gory and dirty. This contradicts to most science fiction films, that tend to be more sterile. It is nice to see a film that is a very good science fiction with elements of horror. Also, big applause for keeping film right at 95 minutes and not trying to make it any longer than it has to be. 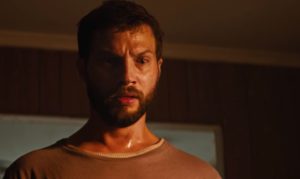 Grey (Marshall-Green) is shocked to see what he has done

Logan Marshall-Green plays our hero Grey in “Upgrade”. And while EVERYTHING he does reminds Tom Hardy (even more here than in “Prometheus“), he actually surprised me how good actor he is. This specifically shows up when Grey goes all robotic under control of STEM. I was worried that he won’t be able to pull it off convincingly, but he delivers a very solid performance. Of the supporting cast I can mention only Betty Gabriel as Detective Cortez, who is investigating the murder of Grey’s wife.

“Upgrade” is a very fresh inclusion into science fiction genre with horror elements. It has an interesting screenplay that keeps you constantly on the edge. Film is not shy of using bloody moments and this gives an interesting take on all the action scenes. And despite that directing could have been edgier, I think you will also be pleasantly surprised by this film.