The Theory of Everything

"The Theory of Everything" is one of the best biopics, with incredible performance by Eddie Redmayne as brilliant Stephen Hawking

"The Theory of Everything" on Amazon

It is almost impossible these days to see a biopic based on a scientist. We tend to prefer more the glamour lives of sportsmen, actors, singers, criminals, politicians, and even prostitutes. In that “The Theory of Everything” stands out, being a movie about one of the most accomplished and prolific physicists of recent times – Dr. Stephen Hawking.

In present, Stephen Hawking is at reception of the Queen of England with his family. But back in 1963, he was just a student at University of Cambridge. He is amazingly clever, but cocky and arrogant. At a local party he meets arts major Jane. He introduces himself as a complete atheist. She is devoted Christian. “What do you believe in?” she asks confused. “In finding an equation to explain everything,” replies Stephen. And so the relationship between two very different individuals starts. However, while having a sudden breakthrough in his research Stephen falls. Doctors have bad news: he has motor neuron disease. It will diminish his ability to walk, eat and eventually breathe. Two years is an average life span for this diagnosis. Stephen is devastated and in depression. But Jane arrives and promises to be with him for however long he has left. And despite the prognosis, Stephen lives for 55 years, becoming one of the most revolutionary physicists of all times. And he comes so close to finding his theory of everything. 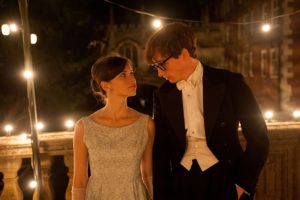 Based on the memoirs of Jane Hawking, film doesn’t concentrate specifically on Jane’s point of view. Maybe it was also because Stephen Hawking himself endorsed the film during his lifetime. Not sure. Regardless it feels more like a proper movie on the life on Stephen that merely a documentary. We get to learn how exactly he became who he is. At the same time, there is very little concentration on the science and theory. As a person who read Hawking’s books, I was a little disappointed in that regard. Film instead concentrates on the emotional view of Stephen and Jane’s life. The toll of taking care of the sharpest brain in modern history bound in the decayed and destroyed body.

One of the things I didn’t like much was the constant deliberation of characters regarding religion and science. The topic comes up pretty regularly. The evolution of characters is tied directly to religious imagery and contradiction of science. Not sure if that was in real life, but on the screen this seemed a little pushy to me. Also albeit having a little artistic freedom with historical events is acceptable for dramatic aspect, some motivations and choices of the characters seem to be a little far-fetched, unfortunately, and as such it might seem that the events were changed noticeably. 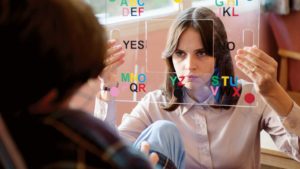 Despite having a documentary feel, director James Marsh tries a lot to stay away from making it an actual documentary. And for the sake of the film, I think it works pretty well. He uses very careful expositions and cinematic imagery to support this. Also the film doesn’t shy away from stepping aside from the perspective of Jane and show us the life of Stephen. His problems, his character, his decisions, his arrogance, cockiness, annoyance and his eternal quest for the sacred theory. The emotional center of the film and the whole story is Jane and her struggle with Stephen and his ailment, but director gives us what everyone wants to see instead – the life of Stephen Hawking.

Stephen (Redmayne) in the most emotional moments of the film

Eddie Redmayne plays the famous physicist. For his portrayal of the character he deservedly received Academy Award for Best Actor. It is amazing the transformation he puts himself through. He replicates Hawking’s mannerisms, his speech and even his disability to unbelievable extent. There is one scene in the film towards the end, with the pen, that makes you totally forget what you are seeing and probably the whole reason for Redmayne winning Oscar. Felicity Jones also surprises in her portrayal of Jane Hawking as a strong and at the same time vulnerable person. We can clearly see the incredible journey of her life with Stephen Hawking.

“The Theory of Everything” is one the best modern biopics. While giving us an intimate view of Stephen Hawking’s life and his ultimate search for a theory he believes exists, we also get to see the emotional journey he has put on the person who love him most – his wife Jane Hawking.