Ridiculous, stupid, hilarious, full of pranks - "Super Troopers 2" is everything that fans of original movie have been waiting for so many years

There are not a lot of successful comedy sequels and there is a certain reason for that. Do you introduce new storylines or do you stick to old jokes, that people are waiting for? How much do you recycle? I mean, yes, you can go all “Hangover 2,” which is basically same characters, same plot, just different scenery. But who will enjoy it? Or you can go completely original and risk losing it all. “Super Troopers 2” tries to do both, with hilarious outcome.

Guess what? It didn’t take long for the whole gang of ex-highway patrol cops to get fired from their new jobs as local police officers. And now they have to live civilian life. Mac and Rook have to endure Farva, who is their new boss at a construction site. Ramathorn lives a life of a lumberjack, cutting trees and embracing mother nature. Foster enjoys being a devout husband. One day their retired Chief calls them up, inviting for a fishing trip in Canada. However, when they arrive they are greeted by Governor who informs them that because of cartography error a small piece of land, including the little border town, is actually a part of State of Vermont. And who can protect the new U.S. territories but a band of crazy, immoral, racist, junkie, prankster, lazy and ridiculous ex-highway police officers? So “super troopers” are back to work to teach locals and their police force how things are done on the other side of border! 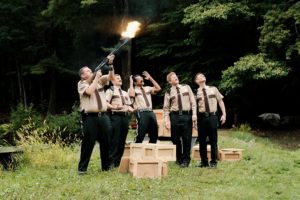 Farva (Heffernan) bets he can shoot bold eagle with AK-48

In the best tradition of comedy troupe Broken Lizard, “Super Troopers 2” is full of hilarious, stupid, ridiculous, rude, crude, cruel, abusive, vindictive, and plain funny jokes. They tried to have everything that people loved from first film. There are weird pullovers. Rook gets hazed, Farva pushes the boundaries of ethical behavior and Chief constantly tries to save everyone. There are a lot of recycled gags, yes, but most of them are used in new context.

Veteran TV series director (and co-star) Jay Chandrasekhar runs the show with excellent execution. I think over the years since the first film he really did improve his art of directing comedy. Pacing is steady, scene changes are natural and what I did enjoy the most – every character gets same screen time. This what felt a little off from the first time, when film concentrated more on Foster and Farva, pushing others back. In “Super Troopers 2” you get your Farva. And Mac, Rook, Thorny and Foster. Even Chief is now on more or less equal levels as the other heroes. This let’s film explore closely the other characters. 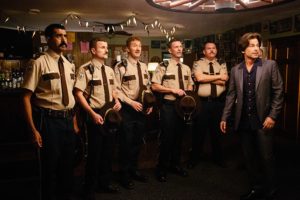 Gang is introduced by mayor (Lowe) to the locals

All five members of the troupe – Jay Chandrasekhar, Kevin Heffernan, Erik Stolhanske, Paul Soter and Steve Lemme deliver awesome performances as the troopers. Though they are basically almost same characters as in first film. Everyone still makes fun of Rook. Farva is still stupid. Mac is crazy and Foster is all about the pranks. The one character I found to have changed the most was character of Chandrasekhar – Ramathorn. He was a senior trooper in the first film, serving as a “moral” center of the story. In “Super Troopers 2” his characters went through changes and his is no longer that central anymore. But that most likely is because of the physical “changes” his character goes through.

Brian Cox returns as Chief and he is amazing. Supporting cast includes Rob Lowe as mayor of the city and Emmanuelle Chriqui as cultural liaison officer. They fit the roles perfectly, but do not offer much. So do trio of Canadian police force. They all are funny, but they are not why people came to see “Super Troopers 2”.

Fans of first film will absolutely love “Super Troopers 2”. It has a lot of new laughs and old jokes. Overall it is a good comedy. Will it become cult classic just as the first one? Not sure. I guess time will tell. Nevertheless, I am very happy that this film has made it to the big screens, even though it took Broken Lizard 17 years to do so.