Amazingly well-made action film, that will keep you biting your nails through its long runtime. Intricate stunts are a wonder to watch and manage to mask out ridiculousness and complexity of the plot.

It is very hard to say what drives Tom Cruise to continue “Mission: Impossible” franchise. Is it money? Fame? Prove something to someone? Or just because he just can’t stay away from the fun? Whatever the reason, his decision to make sixth installment of the series pays off – “Mission: Impossible – Fallout” is definitely the best film of the whole franchise.

But it doesn’t start that well for Ethan Hunt. After he receives mysterious package which informs him of his mission (should he choose to accept it) and self-destructs in five seconds, Ethan faces big dilemma. He needs to choose between life of his friend and lives of possibly billions of people. Ethan without much deliberation decides to save his buddy. In result, he now has to live with consequences of this choice which leads to his own government berating him and forcing to fix his mistakes. Now he and his team of IMF operatives and such have to race against the time. They travel to Paris to meet with mysterious arms dealer, White Widow, who might or might not be able to help Ethan with his problem. But it the world of spies, Ethan should remember that nothing is what it seems to be.

But there are several things I didn’t like about screenplay. Firstly, the whole film’s premise is built on Ethan’s decision to save his friend instead of saving millions of people. In the world of spies, secret agents and operatives it is so unbelievable and inconceivable that an operative as experienced as Ethan Hunt will choose to save his friend and risk deaths of millions. Film justifies this choice by painting Ethan as humane operative. And making everyone care and like Ethan more. Even his boss understands and commends him for his choice. It was so stupid, it almost ruined the whole movie, because I kept saying to myself “well, this is good BUT it wouldn’t have happened have Ethan made the correct choice”.

Then there is weirdly complex plot. I left theater thinking I understood everything, but when my father (whom I’ve seen this film with) asked me who is White Widow and what exactly she was doing there, I suddenly realized that I couldn’t give him a coherent answer. And for next fifteen minutes of drive home I was trying to remember what happened and who double-crossed whom and who is secret agent and who is bad guy and realized that I literally couldn’t make any sense of the plotline. It’s not that it is overly complicated, vice versa, it seems pretty straightforward but just then doesn’t make much sense.

Hunt (Cruise) hangs for his life

“Mission: Impossible – Fallout” hides all these shortcomings with over the top action scenes. And what action scenes are these! Beautifully staged, intricately choreographed, generously filmed and elegantly presented. In the era when CGI and green screens dominate the films, it is a miracle to see “Mission: Impossible – Fallout” which uses a lot of practical effects and rely on incredibly complicated stunts. The motorcycle chase through Paris and helicopter ride through Himalayas, I am sure will stay in memories for long time.

Besides crazy stunts, McQuarrie manages to get viewers on the edge of the seat and keep him there from first scene all the way to the end credits. “Mission: Impossible – Fallout” boasts 2.5 hours runtime, but it NEVER bores you. I have to compliment McQuarrie that even in the slower scenes he keeps everyone entertained. 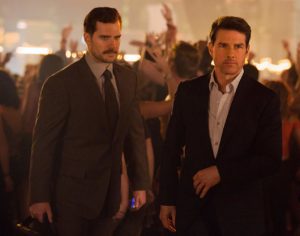 Unlike previous films I actually did enjoy Tom Cruise as Ethan Hunt. He doesn’t dominate the screen time as before and his portrayal is more down-to-Earth. Yes, he is still same James Bond, macho guy, but he feels like more matured, evolved version of himself. Cruise did his own stunts, as usual, and it only magnifies his performance. Hunt’s team members are Ving Rhames as Luther and Simon Pegg as Benji. Both of them bring nothing new, albeit serving as much needed relief from the Cruise. Rebecca Ferguson reprises her role as MI6 operative. But she looks SO much alike Michelle Monaghan, who returns as Ethan’s wife, Julia, that I honestly confused them several times during the film. Henry Cavill appears as CIA operative August Walker and he makes more believable agent than a Superman. Maybe he should stick to this kind of roles.

“Mission: Impossible – Fallout” is clearly not only the best film of the series, but also one of the best action films since “Mad Max: Fury Road”. It is amazingly well-made action film, that will keep you biting your nails through its long runtime. Intricate stunts that are masterfully filmed and edited are a wonder to watch and manage to mask out ridiculousness and complexity of the plot.